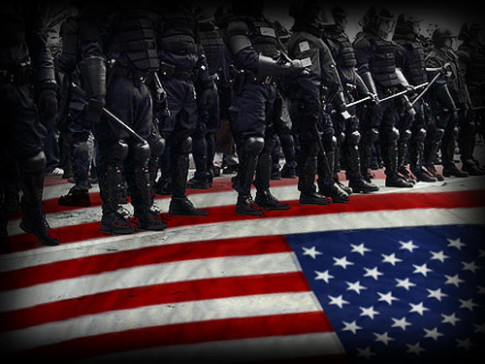 With another recent mass shooting having taken place last week in Charleston, South Carolina – such a crisis is the perfect opportunity for the President to yet again stop just short of using the “C-word” – confiscation. Or “C” for the gun Control he promoted.

Before any victims were even in the ground, he exploited the tragedy for politicized gun control agendas.

Obama is tired of making speeches about mass killings. He’s tired of them. He doesn’t want killings to be the “new normal.” I agree with the President. Random, mass murder whether by guns, caused by mental illness, or by hatred needs to stop.

Therefore, I took the liberty of finding its biggest source…

If it’s really true that you’re 9 times more likely to be killed by a police officer than a terrorist – then we need to have a talk. But where is our speech to address the thousands of Americans executed by police in the last 15 years? Is it not as speech worthy when the number of dead Americans is only 3 per day and is spattered across the country? Victims one by one?

Although we aren’t allowed to know the actual number of American citizens killed by police each year, a database has been tracking news stories since 2013.

In 2014, at least 1,104 Americans were executed on site by law enforcement. No trial – just violent death. A quick scan of the headlines shows an inordinate amount of shooting deaths. So, the media reports on them, but without the outrage reserved for lone shooters who walk into public places spraying bullets at random people.

Not only do some sources average the deaths out to 3 per day, but also one American every 7.6 hours. That means if you saw this headline before work, and then read the story after you got home from work – two Americans have likely died at the hands of law enforcement in the meantime.

The media supports the agenda to remove gun ownership from law abiding citizens because of conveniently timed and fishy looking mass shootings by deranged males – but not from deranged, gun-wielding males with badges. The ones who may gravitate to such positions, who don’t get screened. Who can simply move to another state or nearby department and restart their law enforcement career after they have killed.

Back to the numbers comparison – how does the amount of Americans murdered by police in 2014 (and on average every day) compare to the amount of Americans killed in all U.S. mass shootings? (A mass shooting is typically one person, who has randomly killed at least 4 people in a public place within 24 hours. Not to be confused with sprees, serial murders or mass genocide)

In 2014 police killed about twice the amount of Americans as those killed in all U.S. mass shootings combined, starting in 1982.

The amount of people killed in all U.S. mass shootings – 567.

Again, where are the speeches? Where are the calls for mental health screenings and strict regulations for the authorities? Officers who kill don’t have their three-part name plastered on front pages – no calls for their guns removed. And when they happen to use one of their “less-than-lethal” weapons – they kill. When they have only their fists, boots or their arms – they kill.

This is precisely why you never, ever give up your Second Amendment – or your guns. The tragedy argument must always be flipped back to the authorities who want you to be without any defense, against deranged authorities with all the force. Turn. The. Tables.

The trouble with malleable media statistics and their tunnel vision is – it’s all pretty, framed lies. Recall when school shootings first took place – it was reported on daily for what seemed like years until the word “school” was now associated with “shooting” or gun violence. Of course it has has taken place and is horribly tragic. Nothing discounts that. But it’s a focus redirect for a reaction and controlled outcome. Just think about what now continues to mow down Americans in violence at a most startling rate. Think about how different it would be if the media framed police involved shootings in the same light…they should! It should always be a national tragedy.

An inordinate amount of shootings took place between 2010-2013. Obama doesn’t even wait for burials anymore before he calls for the removal of guns before hitting the greens again. And if people don’t pay attention and sift through the truth they will find themselves stuttering and speechless when authoritarians – law enforcement perhaps – yank guns from their warm, living hands.

Take for instance, the new federal crime unit Chicago called for in the “wake of the 2014 Chicago Easter weekend shootings.” Guns were the boogeymen man in Obama’s old stomping grounds despite the fact that Chicago boasted the strictest gun control laws in the country – and also surpassed New York City in murder crimes in 2011.

The media rode the choppy waves of pointing to crime in Chicago as a reason to rid its citizens of guns, but also wanting to showcase a drop in crime to show that strict gun control works. The problem is – there was no drop in murder. Just a drastic change in how homicides were reported. It’s amazing how much a homicide looks like “death from natural causes” when law enforcement deliberately record it that way. Additionally, operations for this federal unit began April 1 – before Easter. How then could the unit be formed in “the wake of a shooting” when it happened before the shooting took place? I think you know the answer to that…

Additionally, the mainstream media is still purse-lipped on the “mass shooting that never was.” The one that was prevented by one responsible person with a gun. In fact, the “non-event” was lumped in with other shooting stories to showcase “more gun violence.” (That’s also known as deception.) An off-duty female officer saves the world from another Aurora-type shooting? Normally, that holds all the media-trappings of a heroic cause for celebration. Except when that last slot on the machine doesn’t match the greater agenda of gun control – then it doesn’t make it past the cutting room floor.

Again, I’m going to have to side with Obama on this one. Too many killings are taking place – it cannot be the “new normal” – but where, O where, shall we look?

As for [Obama’s] claims that mass shootings do not happen in other countries, of course, he can easily be proven wrong. They do. And when they do, they are generally much more dramatic due to the disarmed nature of the public.

The Second Amendment is non-negotiable. It has to be, unless the world wants to witness an En Masse shooting here in America like never before. Which is why it was written of course – the only reason why it was written.

2 thoughts on “Police Killed More Americans In 2014 Than All U.S. Mass Shootings Combined”