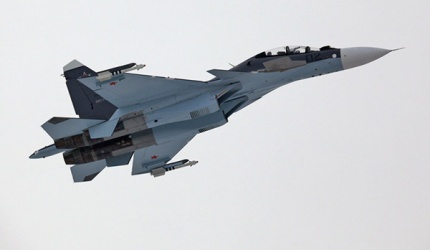 EXCLUSIVE-Strategika 51: Six Russian fighter jets type Multirole Sukhoi SU – 30 SM have intercepted 4 Israeli McDonnell Douglas F-15’s fighter bombers attempting to infiltrate the Syrian coast.The Israeli F 15 warplanes have been flying over Syrian airspace for months and in particular the coast of Latakia, which is now the bridgehead of the Russian forces in Syria.

On the night of 1 October 02, 2015, six Sukhoi SU-30 Russian SM fighters took off from the Syrian Hmimim airbase in the direction of Cyprus, before changing course and intercepting the four Israeli F-15 fighters off the coast of Syria, that were flying in attack formation.

Surprised by a situation as unexpected and probably not prepared for a dogfight with one of the best Russian multipurpose fighters, Israeli pilots have quickly turned back South at high speed over the Lebanon.

The Lebanese army has officially announced at 2313 Z (local time) that four “enemy aircraft” (Israeli) had crossed the airspace of the Lebanon.

This ‘incident’ between the Russian and Israeli combat aircraft struck with amazement the command of the Israeli air force, which has estimated that a possible dogfight between F-15 Israelis and the Russian Su-30 would have led to the destruction of the four aircraft Israelis.

Israel has strongly protested to Moscow of the incident but the Russians demanded explanations about the presence of Israeli military aircraft in full Syrian airspace.

The incident has been ignored by major news agencies but relays political and media of Israel in the United States, Europe and in the Arab world will redouble their efforts to demonize the Russian support for the Syrian Government.