– Inside A Mid-East Coup: A Closer Look At The Russia-Iran Power Play:

Earlier today, we ventured to characterize the breakdown of Washington’s strategy in Syria as the worst US foreign policy blunder since Vietnam.

To be sure, that’s a bold claim, but it’s supported by the sheer number of missteps, bad outcomes, and outright absurdities that have developed in the Mid-East as a result of the effort to oust Bashar al-Assad.

At the most basic level, the support provided by Washington, Riyadh, and Doha for the various Sunni extremist groups battling for control of Syria has created a humanitarian crisis of epic proportions. Hundreds of thousands of people are dead and millions are displaced. As tragic as the situation already is, the conditions are ripe for it to get even worse if the move by Brussels to force recalcitrant EU countries into accepting a migrant quota system they are opposed to ends up triggering a dangerous bout of xenophobia in the Balkans.

Washington’s move to train and arm the Syrian opposition has of course also led directly to the creation of a group of black flag-waving jihadists that have taken the term “extremists” to a whole new level on the way to producing a series of slickly-produced videos depicting the murder of Westerners. This same group is now stomping around between Syria and Iraq wreaking havoc on civilians and committing acts so heinous that even al-Qaeda has condemned them.

Of course the outright chaos the West has managed to create in Syria has now come full circle, providing Iran and Russia with a unique opportunity to tip the scales and seize power in the Mid-East.

What’s important to understand here, is that this isn’t confined to Syria.

That is, Iran isn’t content to preserve its supply line with Hezbollah and Russia isn’t content to play spoiler to the US by propping up Assad. There’s something far more meaningful going on here and it can be readily observed in Iraq.

For years, Iran exercised its influence in Iraq via various Shiite militias controlled by Quds commander Qasem Soleimani. Now, it looks as though the deal struck between Tehran and Moscow in July included a power play designed to gradually muscle the US out of the way in Baghdad. The first concrete evidence of this came late last month when Iraq announced an intelligence sharing agreement with Russia and Syria but the story goes far deeper than that. Consider the following from The Washington Institute:

On September 21, the Wall Street Journal reported that forces under the command of Iran, Russia, and Bashar al-Assad were coordinating efforts to secure the Syrian regime. As Moscow sends advanced aircraft, armored vehicles, and more, Iran’s Iraqi Shiite proxies have simultaneously stepped up their recruitment and deployment for the Syria war. Since July, their Syria-focused online campaigns have jumped significantly (see chart), morphing from infrequent mentions in late 2014/early 2015 to a full-fledged recruitment program involving a number of newer Iranian-backed groups. These Shiite fighters are now spread across Syria, primarily in the western part of the country, launching operations from the suburbs of Damascus to Idlib. 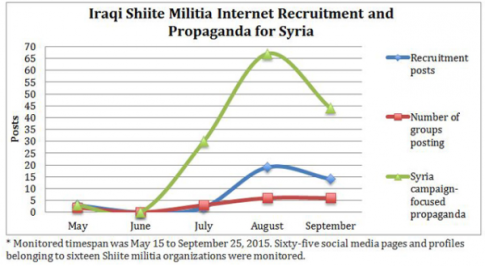 Following the June 2014 seizure of Mosul and much of northern Iraq by the so-called Islamic State/ISIS, a group called Kataib al-Imam Ali (KIA) announced its creation. Formed by Iranian-controlled splinter elements from Muqtada al-Sadr’s Mahdi Army, KIA is probably best known for its fierce battlefield reputation and particularly gory videos featuring severed heads and men being cooked above open flames.

When compared to other organizations, KIA’s Syria-focused recruitment and propaganda campaign has been the largest. Using messages issued via its offices, billboards, and social media, the group has actively recruited new members, especially around Najaf, Iraq. These efforts began with online imagery connecting its fighters with Sayyeda Zainab, an important Shiite shrine near Damascus. Other posts have announced that Jaafar al-Bindawi, the militia’s former head of training and logistics, would be leading the deployment in Syria, while Ali Nizam would serve as the new logistical director for Syrian affairs.

While this effort marks the group’s first publicized deployments to Syria, KIA is no newcomer to the war. Prior to its formal creation, and with Iranian assistance, elements of the militia were very active in Syria beginning in 2013. Alaa Hilayl, one of the group’s heavily glorified “martyrs” and leader of its submilitia Kataib Malik al-Ashtar, was one of the first Shiite commanders to publicly announce combat operations in the Aleppo area in spring 2013.

Meanwhile, Harakat Hezbollah al-Nujaba (HHN, a.k.a. “The Hezbollah Movement of the Outstanding,” or simply Harakat al-Nujaba) has been the other main Iraqi Shiite player in Syria recruitment, and its background is similar to KIA’s. HHN emerged from Iranian-controlled Sadrist splinter group Asaib Ahl al-Haq (AAH) in 2013 and is led by that group’s cofounder, Sheikh Akram Kaabi.

Internet-based propaganda and recruitment materials (mainly through social media) often serve as harbingers of larger moves by Iran’s Iraqi Shiite proxies. This summer, these groups began to disseminate a collection of professionally produced imagery in a highly organized manner, all aimed at raising awareness of the Syria fight and calling for new recruits.

Previously, in fall 2014, the Iranian-backed Iraqi Shiite group Kataib Sayyid al-Shuhada (KSS) instituted a sporadic Internet recruitment program. The group’s fighters were primarily deployed for a failed campaign on Syria’s southern front that lasted into early 2015. Meanwhile, HHN initiated its own limited recruitment program from December to April. Both programs demonstrated that Iraqi Shiites would once again play a major role in Syria (see PolicyWatch 2430, “Iraqi Shiite Foreign Fighters on the Rise Again in Syria”). Yet these moves were only the tip of the iceberg.

While May and June were relatively quiet on this front, Iraqi Shiite recruitment for Syria quickly began to rise in July and spiked in August. September saw slightly decreased recruitment and propaganda posts online, but the traffic was still sizable enough to be regarded as a continuation of the Syria program.

According to fighters who promoted recruitment material or were sent to Syria in late July, training for the deployment often lasted around thirty days and took place in Lebanon or Iran. Considering that most training regimens for Shiite fighters heading to Syria have lasted between two and six weeks (depending on specialization), Iran likely timed the uptick in deployments to best demonstrate unity of arms with Russia and Assad. Specifically, the main spike in recruitment activity began in earnest on July 3, the first reports of experienced KIA fighters deploying to Syria emerged on July 20, and Qasem Soleimani — commander of Iran’s elite Qods Force — met with Russian officials on July 24.

And here’s a map from ISW which “depicts confirmed locations of Iranian Revolutionary Guard Corps (IRGC) commanders in Iraq between October 2014 and October 2015.” ISW continues: “orange markers indicate where IRGC personnel were spotted in an area witnessing active military operations [and] asterisks indicate a Soleimani sighting”: 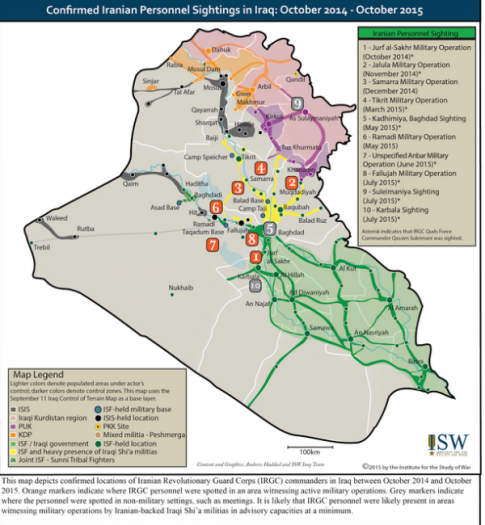 In short, what’s happened here is that once Tehran secured the support of the Russian air force juggernaut, the IRGC diverted its Iraqi militias to Syria, where they will now join Hezbollah and ensure that Putin’s airstrikes are bolstered when needed by effective ground support.

The announcement this week by Baghdad that Iraq would welcome Russian airstrikes against ISIS indicates that once Moscow and Tehran have restored Assad and stabilized Syria, the joint air and ground campaign will move to Iraq, a strategic shift that will complete what we have characterized as an outright Mid-East coup.

If this thesis materializes, it will mean that the West’s attempt to destabilize the Assad regime has not only failed, but has in fact opened the door for Iran to seize control of the Mid-East and for Russia to reestablish itself as a global superpower capable of bringing its influence to bear on any nation at any time.

It’s your move Washington, and the stakes couldn’t possibly be higher…