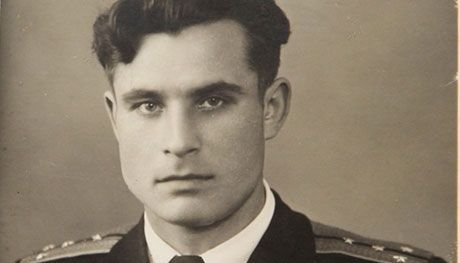 You may have never heard of Vasili Arkhipov. And yet life as we know it on this planet could have ended if it were not for his crucial intervention during the Cuban Missile Crisis.

Born in 1926, Arkhipov saw action as a minesweeper during the Soviet-Japanese war in August 1945. Two years later he graduated from the Caspian Higher Naval School, serving in the Black Sea and Baltic submarine fleets – just in time for the start of the Cold War, which would stay with him for the rest of his service.

During the 1950s the Soviets became very concerned about the US’ lead in submarines. They eventually rushed the development and construction of the K-19, the first of two new Hotel-class ballistic missile submarines. However, things did not go smoothly. Eleven people died due to accidents and fires during the construction phase. To top everything off, the champagne bottle used in the inauguration ceremony failed to break.

These were frightening omens for the crew. But they could scarcely imagine the events that would unfold soon after.

Arkhipov was appointed deputy commander of the K-19 in its maiden voyage in July 1961, under the command of Captain Nikolai Zateyev. After a few days conducting exercises off the coast of Greenland, the submarine developed a major leak in its reactor coolant system, leading to the failure of the cooling pumps. Radio communications were affected and the crew was unable to contact Moscow.

With no backup system, Zateyev ordered the seven members of the engineering crew to come up with a solution and avoid a nuclear meltdown. This required the men to work in high radiation for extended periods. Sacrificing their own lives, they bootstrapped a secondary coolant system and kept the reactor from a meltdown.

The incident irradiated the entire crew, including Arkhipov. All members of the engineering crew and their divisional officer died of radiation exposure within a month. Fifteen more sailors died from the aftereffects of radiation exposure over the following two years. This incident was immortalized in the 2002 Hollywood movie “K-19: The Widowmaker”, starring Harrison Ford and Liam Neeson (both featuring terrible Russian accents).

The Cold War started heating up soon after. In July of 1962, Soviet leader Nikita Khrushchev agreed to Cuba’s request to place nuclear missiles in Cuba as a deterrent to future US interference, pursuant to the Bay of Pigs invasion debacle a few years earlier. In mid-October, a US reconnaissance airplane produced evidence of medium and long range Soviet ballistic missiles on the site, sending alarm bells ringing in Washington DC.

US President John F. Kennedy promptly established a military blockade to prevent further missiles from entering Cuba and demanded that the missiles be dismantled and returned to the Soviet Union. Over the following days the world came close to the brink of nuclear war as the two blocks vigorously asserted their positions.

Nobody realized at the time just how close to disaster they really were. And that’s where Arkhipov would make his decisive contribution to world history.

Arkhipov was second-in-command in the nuclear-armed Foxtrot-class submarine B-59, part of a flotilla of four submarines protecting Soviet ships on their way to Cuba. On October 27, as they approached the US imposed quarantine line, US Navy ships in pursuit started dropping depth charges to force the B-59 to surface for identification – completely unaware that it was carrying nuclear weapons.

The explosions rocked the submarine which went dark except for emergency lights. With the air-conditioning down, temperature and carbon dioxide levels rose sharply. The crew was hardly able to breathe.

Unable to contact Moscow and under pressure from the Americans for several hours, Captain Valentin Savitsky finally lost his nerve. He assumed that war had broken out between the two countries and decided to launch a nuclear torpedo. He would not go down without a fight.

However, unlike the other submarines in the flotilla, the three officers onboard the B-59 had to agree unanimously to launch the nuclear torpedo. As the other officer sided with Savitsky, only Arkhipov stood in the way of launching World War III.

An argument broke out between the three, but Arkhipov was able to convince the Captain not to launch the torpedo. How was he able to prevail under such stressful conditions? He was actually in charge of the entire flotilla and as such was equal in rank to Savitsky. But the reputation he had gained during the K-19 incident may have been the decisive factor in convincing the other officers to abort the launch. That detail may have made all the difference.

The submarine eventually surfaced and awaited orders from Moscow, averting what would have been a nuclear holocaust. The Cuban Missile Crisis ended a few days later.

This crucial episode of the Cold War only became known to the West after the collapse of the Soviet Union many years later.

Arkhipov continued to serve in the Soviet Navy, commanding submarines and later submarine squadrons. He was promoted to rear admiral in 1975 and became head of the Kirov Naval Academy. In 1981, he was promoted to vice admiral, retiring a few years later. The radiation he was exposed to in the K-19 incident contributed to his death in 1998, at age 72.

It is frightening to ponder how closely the civilized world came to the brink of extinction. It was only a click away, with two out of three in favor.

It may not have been the only time either. Who knows how many more Soviet and American personnel played a decisive role in averting nuclear annihilation? One person can indeed change the fate of the world.

We should never let their stories be forgotten.