UPDATE: It appears to me, with the way this is working out, that the Saudi government might have intentionally caused this. Consider the following two new items:

The saudi version of events does not wash. But enough information is available to decipher the most probable reality: The massive security forces (150 heavily armed security officers) accompanying an un scheduled visit by a Saudi Prince caused a mass panic.

As I predicted, the death toll has now hit 2,000 and is still climbing

UPDATE: Despicable: Saudi army blocked all access to hospitals. UPDATE: With 2,000 confirmed dead, some countries are reporting that only 20 percent of missing people are accounted for, which means the death toll could go much higher than 2,000. This is an impossible scenario absent a massive panic – possibly caused on purpose.

If this was not done on purpose, then WHY would the Saudi military block access to hospitals?

UPDATE: Saudi prince that caused the stampede with his security forces controls the Yemen war!

Here is what happened –

Prince Mohammad bin Salman Al Saud arrived at the site completely un announced and confronted the crowd with an entourage of over 300 people, 150 of which were heavily armed security which beyond all doubt caused a huge panic that made everyone run.

At the same time this happened, Saudi crowd control totally mismanaged the situation, and ended up blocking off the exit route that over a hundred thousand people tried to exit through, which forced them up against a streetless row of concrete houses. The fact people were diverted straight into the houses is supported by one poster’s testimony that she managed to get on top of the row of houses by climbing right up the face of one before being crushed from behind. Obviously then, the ones in the front that could not scale a wall got crushed. And with piles of dead bodies in front of a row of concrete homes, it certainly looks like this was precisely the case. And from how things look now, even though the Sauds refuse to admit to a death toll higher than 717, (after initially trying to whitewash it down to less than 200) it now looks like the death toll is over 2,000, all because an idiot saudi prince dropped into the middle of things un announced, caused mayhem, and then freaked people out with a massive security force. 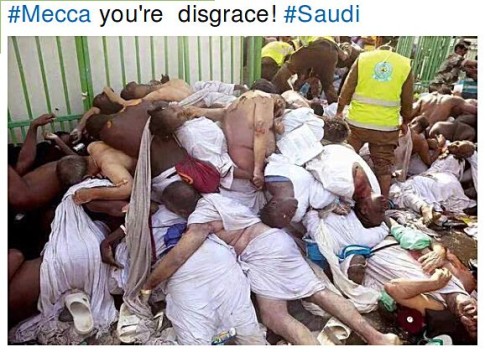 The zio press has made sure everyone elsewhere in the world thinks that this event was caused by people being on a brainless dash to “stone the devil” but now that the details are getting out, this was an oil money problem, some rich selfish child obviously got enough of it to pay for his own little army that scared the crap out of everyone.

On top of this, all the sauds appear to be doing is a whitewash rather than try to help the injured. It took them two hours to arrive at the scene and do anything at all, and when they did do something, rather than help the injured, they started carting off dead bodies and let the injured people lay on the pavement in the sun. So we probably will never get a final death count – if they put that much priority into carting off the dead, it probably means they wanted a cover up more than anything else at first, and then encountered a huge problem – too much to hide.

After combing through the comment sections and reading the posts of witnesses, it appears that it took 2 hours for help to arrive ONLY because everyone who initially came to help was diverted to protect the Prince that created the scare and caused it all! Even today, the latest pictures, shows piles of bodies still mixed in with suitcases and whatever else people were carrying, (even crushed wheel chairs) which means the Sauds are clueless about the real death toll, and these bodies are going to rot before they get them moved, the response is THAT PATHETIC AND SLOW.

SAUDI LIES: They say two converging groups caused this, after they had to change course for the prince. REALITY: It is obvious that people were scared into running under the tents, encountered the concrete homes on the other side of the tents, and then piled up there. Nowhere in ANY pictures is there any convergence zone, it all happened up against the walls of concrete homes on an alley type street that went between the homes and the tents. If the Saudis were not lying, there should be a pile of bodies where two large streets converged, but instead it is a mysterious long pile of bodies in what appears to be a totally unconnected alley.