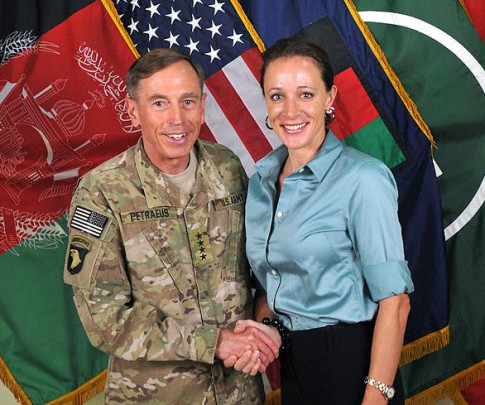 Moving on, but it only gets better because suddenly, out of the blue, a new Treasury bond market analyst emerges: none other than disgraced former CIA head David Petraeus, who somehow avoided treason charges when it was revealed that he had a mistress to whom he had leaked confidential material resulting in his prompt termination from the CIA, only to reemerge several years later…. as a Treasury market expert (as well as being recently hired by KKR, of course, just so the private equity company can scrub all of his formerly confidential knowledge before giving him the boot in the nearest future).

CNN introduces him as follows: “Petraeus is one of America’s brightest minds on matters of national security. He served as a top military commander in charge of troops in Iraq and Afghanistan before becoming director of the CIA in 2011.”

Leaving aside the laughable assertion of the first statement, after reading some of his comments we can only imagine he, as a member of the “intelligence community”, is a devoted subscriber of the abovementioned “Strategic Intelligence” newsletter.

Because here is the one statement from Petraeus that we read, read again, then kept rereading for one simple reason…

“There is no shortage of customers for the purchase of U.S. Treasuries,” said Petraeus…. “Given the relative strength of the U.S. economy and the prospect of the Fed raising interest rates at some point in the months ahead, I suspect there will continue to be very keen interest in U.S. Treasuries,” Petraeus said.

… everything in it is dead wrong.

No David, the prospect of the Fed rising interest rates will crush interest in Treasurys. In fact, the only thing that will generate “keen interest” in US Treasurys is ongoing weakness in the US economy: precisely the opposite of the point you are trying to make.

And just to explain to KKR’s prominent hire what is leading to the great demand for Treasuries, the answer is the dumping in stocks, as the Great Unrotation kicks in once again, and all those who are selling equities end up buying Treasurys along the entire curve. In fact, the worse the US economy gets, and the higher the probability of NIRP, QE4 and/or helicopter money, the greater then demand for Treasurys, not because the US now has $19 trillion in debt but simply to frontrun the Fed’s monetization of US paper once again.

Our advice, Mr. Petraeus: don’t quit your day job. In fact, if you want to keep it you may want to avoid giving any interviews at all going forward or else KKR will soon find that there is absolutely no “intelligence”, confidential or otherwise, to be scrubbed.

Incidentally, the above is a great example of an “analysis” reaching the right conclusion for all the wrong reasons – a theme all too prevalent on Wall Street. For a far better, and correct, explanation why Chinese selling of TSY may not lead to a surge in yields (the jury is still clearly out – Chinese selling has only been widely recognized for the past month) read Why China Liquidations May Not Spike US Treasury Yields.