– U.S. Will Station New Nuclear Weapons in Germany Against Russia:

Submitted by Eric Zuesse, investigative historian Eric Zuesse is the author, most recently, of  They’re Not Even Close: The Democratic vs. Republican Economic Records, 1910-2010, and of  CHRIST’S VENTRILOQUISTS: The Event that Created Christianity.

U.S. Will Station New Nuclear Weapons in Germany Against Russia

Germany’s ZDF public television network headlines on Tuesday September 22nd, “New U.S. Atomic Weapons to Be Stationed in Germany,” and reports that the U.S. will bring into Germany 20 new nuclear bombs, each being four times the destructive power of the one that was used on Hiroshima. Hans Kristensen, the Director of the Nuclear Information Project at the Federation of American Scientists, says, “With the new bombs the boundaries blur between tactical and strategic nuclear weapons.” 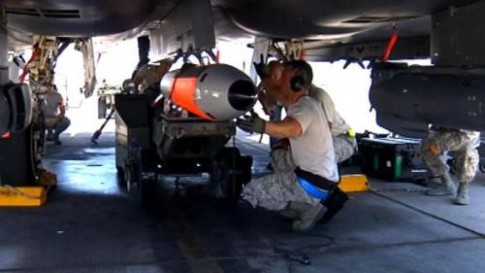 German Economic News also reports on Chancellor Merkel’s decision to allow these terror-weapons against Russia: “The Bundestag decided in 2009, expressing the will of most Germans, that the US should withdraw its nuclear weapons from Germany. But German Chancellor Angela Merkel did nothing.” And now she okays the U.S. to increase America’s German-based nuclear arsenal against Russia.

Maria Zakharova, of the Russian Foreign Ministry, says: “This is an infringement of Articles 1 and 2 of the Treaty on Non-Proliferation of Nuclear Weapons,” which is the treaty that provides non-nuclear states the assurance that the existing nuclear powers will not try to use their nuclear status so as to take over the world.

German Economic News says: “The federal government had demanded the exact opposite: The Bundestag decided in March 2010 by a large majority, that the federal government should ‘press for the withdrawal of US nuclear weapons from Germany.’ Even the coalition agreement between the CDU and FDP, the German government in 2009 had promised the withdrawal of nuclear weapons from Büchel. But instead there will be these new bombs.”