Two weeks ago, when no one was talking about the possibility of a government shutdown, we warned it was coming. Today, as Politico reports, with very little time left to reach a deal, budget experts project a 75% chance of a shutdown.

While a shutdown is anything but certain, of course. But it’s hard to see how the situation could change dramatically in the very short time left before the start of the fiscal year. It’s far more likely the odds will get worse rather than better. Politico’s Stan Collender’s most recent projection is that there is now a 75 percent chance of a shutdown. As he explains,

As an almost 40-year veteran of the federal budget wars and one of the few people who has served on the staffs of both the House and Senate budget committees, I’ve reached this lofty number by reading the budget tea leaves that others seem almost desperate to discount, disregard or ignore.

First and foremost, there is not enough time to reach a deal. Not only have none of the fiscal 2016 appropriations yet been signed into law, none have even passed both the House and Senate. With less than two calendar weeks (and far fewer days of potential legislative work) to go, the only way to keep the government from shutting down will be for Congress and the president to agree on a continuing resolution to fund the government for a short time while a larger deal is negotiated.

Such a short-term CR will be very difficult for any number of reasons, but the controversy over Planned Parenthood is perhaps the biggest one. The dispute over continued funding for the organization has added a hyperemotional element to what already is a hyperpartisan and dysfunctional budget process. Some Republicans have vowed never to vote for any legislation — including a CR — that maintains this funding, while the White House has promised to veto any bill that ends it. With Congress not likely to have the votes to override a veto, this issue alone could easily bring government operations to a halt on Oct. 1.

These already difficult issues are being made much worse by the often-extreme differences between House and Senate Republicans and the inability of the GOP leaders in both houses to control their members.

That puts Senate and House Republicans directly at odds. McConnell likely can’t get the Senate to adopt a CR that stops funding for Planned Parenthood while Boehner can’t get the House to adopt one that allows it to continue.

That means the speaker and majority leader might have to do what Boehner has done in past budget fights: work with Democrats to get the votes needed to move ahead. But House and Senate Democrats already have indicated that their votes won’t come cheap. Their demands could include all of the budget items Republicans don’t want, such as more funding for domestic as well as military programs, continued funding for Planned Parenthood and funding for the implementation of the agreement with Iran. They might also want something more, such as an agreement to begin the budget negotiations the White House has been requesting.

This total capitulation to Democratic demands will be very hard for House and Senate Republicans to stomach. It could cost Boehner his job as speaker and threaten McConnell’s authority as majority leader. It also is not at all clear that House Republicans or the four GOP senators running for president view a government shutdown as an event to be feared politically or that they are worried about being blamed should one occur. For some — including many of the same representatives who are threatening Boehner’s tenure as speaker — a shutdown would be the legislative equivalent of a reelection campaign event that energizes the Republican base and convinces constituents someone is fighting for them in Washington.

These House members point with glee to the results in the first election following the last shutdown in 2013. Not only did the GOP win nine seats and wrest control of the Senate, it won 16 more seats and increased its majority in the House. Why should anyone think, they ask, that the situation will be any different this time around?

As we concluded previously,there is more than one way that Congress could still avoid a shutdown at the end of the month. The most obvious option would be for House Republican leaders to bring “clean” spending legislation to a vote, with the expectation that it would pass with substantial Democratic support. To satisfy conservatives, the House could also vote on separate legislation to enact the specific policy changes some lawmakers are demanding, potentially via the reconciliation process, which requires only 51 votes in the Senate and therefore would allow congressional Republicans to send such a bill to the President’s desk (it would nevertheless be vetoed, but the effort might be enough to satisfy House conservatives). A second option would be to split off the controversial issues from the funding for other agencies, limiting the scope of any potential shutdown, similar to the strategy used in late 2014 to extend spending authority in the face of Republican opposition to the President’s executive action on immigration. However, it seems unlikely that congressional Democrats would support such a move this time around.

So will a shutdown occur? With a few weeks to go until the deadline, the outlook is very murky but our best guess is that Congress will narrowly avoid it. While there are several considerations that make a shutdown possible, as noted above, support for the current effort is still fairly limited. Prior to the 2013 shutdown, for example, 80 House Republicans signed on to the effort to oppose spending legislation unless it blocked funding for the Affordable Care Act (ACA, or Obamacare). By contrast, only around 30 have signed on to the current effort, though that number may rise.

Exhibit 1: Shutdowns create volatility mainly when they overlap with a debt limit deadline 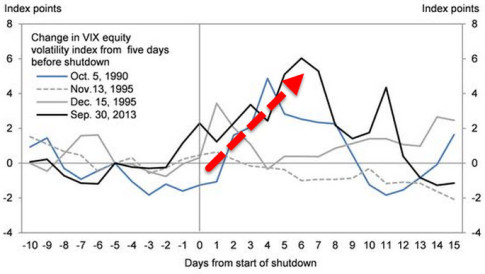 Second, a potential shutdown would probably be very short. In 2013, the shutdown ended up lasting longer than initially expected, in large part because the only natural deadline was the debt limit deadline, which was 2.5 weeks after funding lapsed. While one might argue that the lack of any deadline could lead to an even longer potential shutdown this year, it is more likely in our view that it would simply result in a decision to end the shutdown soon after it began, as has been the case with nearly every other government shutdown. In the 12 instances since 1980 that the federal government has shut down due to a funding lapse, the shutdown has lasted more than a week only twice. In 2013, we estimated that each week that all agencies were shut down would reduce real GDP growth in the quarter by around 0.2pp, though most of this effect would be reversed in the following quarter (after the first week, most civilian defense employees returned to work, reducing the economic effect of the final two weeks of what turned out to be a three-week shutdown).

It is too early to predict with any certainty whether a shutdown will occur, let alone how long it might last, but as the situation stands today, it seems likely to us that if a shutdown does occur it would have a smaller effect than the one in 2013.

With the beginning of a new fiscal year less than two weeks away and no funding authorization in place, there is a growing chance of a Federal government shutdown. Congress will also have to increase or suspend the debt ceiling within the next 1.5 month as the Treasury is projected to exhaust so-called ‘extraordinary measures’ at some point in October or November.

No matter how immaterial in terms of their economic impacts, government shutdowns create uncertainty and thus influence Fed decisions. We already view the odds of an October liftoff as low and a government shutdown could lower them further. Although funding issues should be resolved by the December FOMC meeting, there is a small chance that the fiscal standoff extends into the end of the year (i.e. due to a temporary continuing resolution), creating another deterrent for the Fed.