– Wanna See The ‘Trick’ In Trickle-Down?:

In the chart below I’ve indexed real median personal income against real corporate profits (before tax w/o adjustments) to the beginning of 2009, the point at which central bankers implemented trickle down economics to rescue Americans from the largest gov/banking policy induced disaster in the history of the world.   Let’s have a look at the results of the bankers trickle down strategy…. 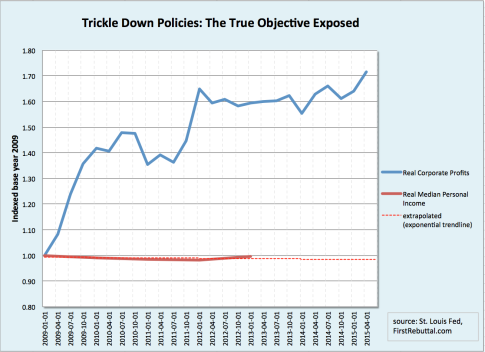 Go figure eh….  Anyone think moar QE is the answer??  We just won’t know unless we keep on trying I suppose… says Ms. Yellen and the Business Roundtable (click to see many of the very faces of those that reached their shifty little hands into the ass of the golden goose and pulled out trillions of printed dollars but left trillions in debt obligations for your grandchildren).

Anecdotally, for those of you that rarely leave the city, I was in a small town in Indiana not too long ago.  I stopped to get a bite to eat and prefer local diners to fast food.  Problem was almost every shop in what would have been a quaint downtown was boarded up.  I asked a lady if there was still a place to get a bite to eat in town.  She pointed me to the last shop at the end of the row.  I went in, sat down, ordered some food and couldn’t help overhearing the guys talking at the table next to me.

“I’m really hoping to get onto the second shift soon”, says one guy.  The other guy responds, “yeah me too man we (family) could really use that extra $0.75 an hour”.

I immediately texted some broker buddies in Chicago and New York and relayed the conversation I’d just overheard, with the caption…. “I just overheard what everyday Americans are talking about….”

The reality is that while most folks who are reading this may find it difficult to empathize, the vast majority of Americans are scratching for any extra $0.75 an hour they can find.  At the same time CEO’s and highly paid bureaucrats continue to tout policies that have enriched themselves beyond the wildest dreams and comprehension of the average American.  Yet they promote these policies as being in the best interest of the working class.

And although you may be comfortable with your current financial sector job it to is but a fleeting position.  Today you are fine but tomorrow you too will be scratching for whatever cash you can find. There are very few who will not be impacted by what’s already been set in motion.

3 thoughts on “Wanna See The ‘Trick’ In Trickle-Down?”