– Migrant Crisis: The Footage The Media Refuses To Broadcast (Video) 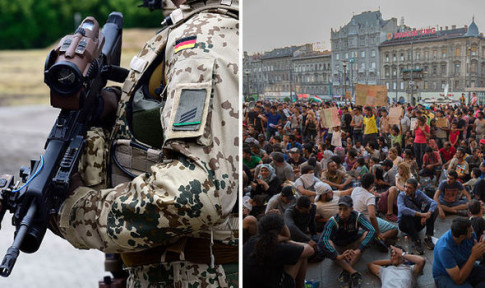 Two weeks ago, in what was the first official shot across the bow to Europe’s long-standing “Schengen” customs union, we reported that the Italian province of Bolzano across from the Austrian border announced it is willing to “temporarily suspend Schengen” and “restore border controls” following a request by the German state of Bavaria.

Today, none other than Europe’s master state, Germany itself, is about to launch an ICBM at Schengen when, as BBC reports, “Germany is to reintroduce some form of controls on its border with Austria to cope with the influx of migrants, German and Austrian media report.” While the BBC said that it is not clear what measures would be introduced, it is likely that a full return to the pre-Schengen era, with extensive customs checks of every border crosser is imminent.

BBBC further reports that”more than 13,000 migrants arrived into Munich alone on Saturday. Germany’s vice-chancellor said the country was “at the limit of its capabilities”. Germany’s Bild newspaper and Austria’s Kronen Zeitung said controls would be in place on the Bavaria-Austria border. Germany expects 800,000 migrants to arrive this year.”

Also, according to Germany’s Spiegel, German Interior Minister, Thomas de Maiziere, would make an announcement in the coming hours. Since last month, Mr de Maiziere said the Schengen agreement, which allows free movement between a large number of European countries, could be suspended, it is quite likely that as of today, Europe’s customs union will officially be halted if only temporarily.

Kronen Zeitung said that Bavarian police will begin to carry out checks “to determine immediately who is entitled to asylum”, but it is not clear how such checks would be made.

Earlier on Sunday, Germany’s Vice-Chancellor Sigmar Gabriel, who is also economy minister, warned the country was being stretched to its limits by the new arrivals.

“Europe’s inability to deal with the migrant crisis has brought even Germany to the limit of its capabilities,” he told Der Tagesspiegel newspaper. “It is not just a question of the number of migrants but also the speed at which they are arriving that makes the situation so difficult to handle.”

Which is somewhat ironic considering the full-court media propaganda press eager to make Germany seem like the promised land for hundreds of thousands of Syrian refugees: just ealier today CBS had an article on “Angela Merkel: From debt villain to migrant heroine” in which it said “In the space of two months, German Chancellor Angela Merkel has gone from being portrayed as the heartless villain in Europe’s debt crisis to the heroine of those flooding in to find refuge on the continent.”

Her insistence that Germany and its fellow members in the 28-nation European Union all have a duty to shelter people fleeing civil wars has cemented something similar among hopeful migrants. Some have held aloft pictures of Merkel, and she was greeted with applause and cheers at a Berlin refugee home Thursday. 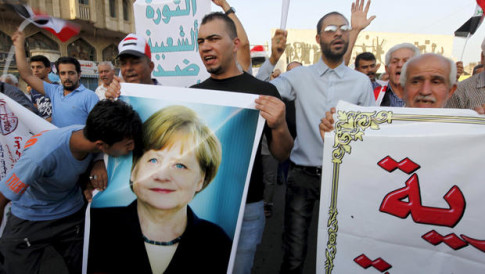 Oops, may want to rewrite that one quickly, especially following a report from Bild that the German government “will send 2,00 riot police to the Bavarian border, where they will “help the State to secure the border.”

Not only that but Express reported that the “German Defence Minister has admitted that the country verges on “an emergency” after cracks have begun to emerge in the ‘German generosity’ and that some 4000 German troops have been put on standby.

Germany has been viewed as a leader on Europe’s worst refugee crisis for 70 years, with Chancellor Angela Merkel’s expectation that the country will take in 800,000 this year alone.”

However, the move appears to have backfired as German towns struggle to process the unprecedented number of arrivals.

He added that the troops would be able “to pitch in in an emergency”.

Putting Germany’s generosity, which just ended in perspective, “More migrants have arrived at Munich’s train station since the start of September than in the whole of 2014.”

The good news for Germany is that at least the tens of thousands of Muslims migrants will have a place to pray: just as “generously” Saudi Arabia – in lieu of actually accepting any asylum seekers – offered to help Germany cope by building at least 200 mosques.  The Gulf state said it would build one mosque for every 100 Middle Eastern refugees who entered Germany. It will be busy building a lot of mosques.

The bad news for Germany is that not only will the migrant situation not improve any time soon, but it is now in a lose-lose situation, with the facade of its former faux generosity crumbling, just as countless more migrants are set to lose their lives on their way to a promised land that no longer is.

And confirming just that, moments ago Xinhua reported that 28 migrants were killed as a boat capsized off Greece.

For now, however, one thing is certain: Europe may still have the Euro now that Greece is a permanent German debt colony, but the true heart of Europe, its customs union, is about to go on into indefinite V-fib as nation after nation follows in Germany’s footsteps and closes its doors to all those refugees it so generously welcomed until now.

Update: just minutes after we wrote the following, we got confirmation we may have been on to something. Oh, and goodbye Schengen, only for the “time being” of course. from Czech News:

The Interior Ministry´s spokeswoman Petra Kucerova confirmed for CTK that the measure is linked to the launch of border checks on the German-Austrian border over the influx of refugees.

Earlier today, German Interior Minister Thomas de Maiziere announced that Germany will temporarily introduce checks on its borders, the EU´s internal ones, beginning with its border with Austria. He said Germany consulted Austria before taking the step.

“For the moment, we will react by taking our own measures, which is the reinforcement of the police on duty in the border areas. Our further steps will depend on the number of incoming migrants,” Rendlova said.

She said the measures would concern the South Moravia and South Bohemia Regions, both of which border on Austria.  The police would release information about the reinforcement and further details only later.

To the refugees (and/or masked ISIS terrorists of course) that successfully made it into Germany/Europe, congratulations. To the rest of them: better luck next time.