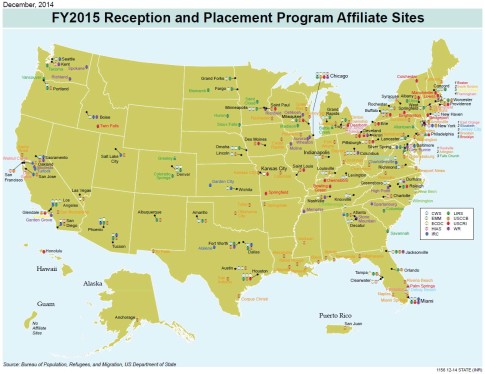 For the past several weeks it seemed as if Germany had truly become the promised land for Mideast asylum seekers, primarily those seeking to escape the Syrian civil (and global proxy) war, but according to various media reports, also a material number of “ISIS-linked terrorists.” Then it all came crashing down earlier today when Germany’s beloved by all refugees “Mutti” said genug, and with one decision shut down the border with Austria in the process unraveling decades of customs-union progress (following promptly by the Czech Republic doing the same, with Italy expected to follow suit in the hours ahead).

Ironically, just as Europe is shutting its doors to Syrian refugees, the US is opening its own.

On Friday, Obama said that the United States will admit 10,000 Syrian refugees for resettlement over the next 12 months, following criticism that America is not doing enough with Europe’s migrant crisis.

How will this take place logistically? As AFP notes, “this would represent a huge increase in the number of families arriving on US soil. In the more that four years since fighting erupted barely 1,800 Syrians have been welcomed here.” Which is why the French wire service did a brief summary of the various steps involved in admitting a record number of Syrians on US soil.

Here are the key points:

More than four million people have fled the fighting in Syria since 2011 and most are living in camps in Jordan, Turkey, Lebanon, Egypt and Iraq, where the UN High Commissioner for Refugees registers them. Some 18,000 of these people — chosen because they are the most vulnerable whether through family circumstances, injury or disability – have been referred to the United States for resettlement. Officers from the Department of Homeland Security fly from Washington to the camps and conduct interviews with candidates, seeking to weed out what a US official called “liars, criminals and terrorists.” Each case file is reviewed by the National Counterterrorism Center, the FBI’s terrorist screening center, the DHS, the Department of Defense and “other agencies” – US intelligence.

“Refugees are subject to the highest level of security checks of any category of traveler to the United States,” another State Department official told reporters.Meanwhile they receive medical tests and those with communicable diseases, most commonly tuberculosis, are given treatment before they can travel to the United States, often delaying the process.

Currently the procedure takes between 18 and 24 months from the time UNHCR recommends a refugee for resettlement and that person’s flight to America.

It is not clear how much the screening process for Syrians costs, but the US government spent $1.1 billion last year resettling 70,000 people from around the world, or almost $16,000 per head.

Critics note that if the United States takes two years to screen each of the 10,000 refugees Obama has promised to welcome none will have arrived before he leaves office.

But, according to a US official, thousands of cases are already in the pipeline and will hopefully now be processed faster.

“We have been resettling Syrian refugees in small numbers since 2011 and it was only in June of 2014 that UNHCR started submitting large numbers of referrals, between 500 and 1,000 per month,” she said.

“Those referrals have come pretty steadily since last June to the point where we now have a critical mass. We at the State Department have already prepared the cases for more than 10,000 people.”

But the most important question on the minds of most Americans is the following:

Well, once refugees are approved, the State Department pays the International Organization for Migration (IOM) to fly them to the United States.  Refugees sign a promissory note to repay their airfare once they are established, and they are met at the airport by members of one of nine non-government resettlement agencies contracted by the State Department.

There are around 180 resettlement centers dispersed across the United States, where NGO workers help the new arrivals settle in and find work and accommodation in their first 30 to 90 days.

Those who have relatives in the United States will sometimes be assigned to live near them, and most go to cities like Atlanta, San Diego or Dallas where rents are more affordable than in New York or San Francisco.

Others end up in smaller cities like Boise, Idaho or Erie, Pennsylvania, but regardless of where they are taken they are free to move once they find their footing. After 90 days new arrivals are no longer eligible for the State Department-funded support through the resettlement agencies, but some join support programs run by the Department of Health and Human Services.

So where are these 180 resettlement center? They are shown on the map below:

The full list can be found in the 35-page document sourced from the Refugee Processing Center.

All this, we again remind readers, just so a Qatari gas pipeline can cross Syria and enter Europe, ending Gazprom’s monopoly over European gas demand.

3 thoughts on “10,000 Syrians Are Headed For The Following 180 US “Refugee Processing Centers””