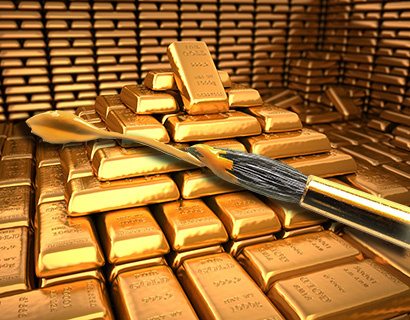 Over the past several years, incidents involving fake gold (usually in the form of gold-plated tungsten) have emerged every so often, usually involving Manhattan’s jewerly district, some of Europe’s bigger gold foundries, or the occasional billion dealer. But never was fake gold actually discovered in the form monetary gold, held by a bank as reserve capital and designed to fool bank regulators of a bank’s true financial state. This changed on Friday when Russia’s “Admiralty” Bank, which had its banking license revoked last week by Russia’s central bank, was reportedly using gold-plated metal as part of its “gold reserves.”

According to Russia’s Banki.ru, as part of a probe in the Admiralty bank, the central bank regulator questioned the existence of the bank’s reported quantity of precious metals held in reserve. Citing a source, Banki.ru notes that as part of its probe, instead of gold, the “regulator found gold-plated metal.”

The Russian website further adds that according to “Admiralty” bank’s financial statements, as of August 1 the bank had declared as part of its highly liquid assets precious metals amounting to 400 million roubles. The last regulatory probe of the bank was concluded in the second half of August, said one of the Banki.ru sources. Another source claims that as part of the probe, the auditor questioned the actual availability of the bank’s precious metals and found gold-painted metal.

The website notes that shortly before the bank’s license was revoked, the bank had offered its corporate clients to withdraw funds after paying a commission of 30%. This is shortly before Russia’s central bank disabled Admiralty’s electronic payment systems on September 7.

Or at least highly liquid on paper: according to Banki.ru the key reason for the bank’s license revocation was the central bank’s insistence that the bank had insufficient reserves against possible loan losses.

The Russian central bank has not yet made an official statement.

The first question, obviously, is if a small-to-mid level Russian bank was using gold-plated metal to fool the central bank about the quality of its “gold-backed” reserves, how many other Russian banks are engaged in comparable fraud. The second question, and perhaps more relevant, is how many global banks – especially among emerging markets, where gold reserves remain a prevalent form of physical reserve accumulation – are engaging in comparable fraud.

Finally, what does this mean for gold itself, whose price on one hand is sliding with every passing day (thanks in part to what is now a record 228 ounces of paper claims on every ounce of physical gold as reported before), even as it increasingly appears there is a major global physical shortage. If the Admiralty bank’s fraud is found to be pervasive, what will happen to physical gold demand as more banks are forced to buy the yellow metal in the open market to avoid being shuttered and/or prison time for the executives?