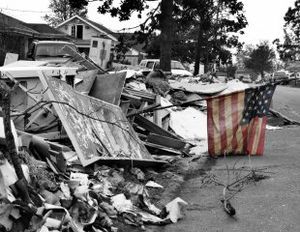 The following is an excerpt from the new book Disaster Profiteers: How Natural Disasters Make the Rich Richer and the Poor Even Poorer by John C. Mutter (St. Martin’s Press, 2015):

Disaster seen as an opportunity for engineering social change is not a new idea. The Great Kanto Earthquake of 1923 occurred simultaneously with a typhoon, the only occurrence of such a double disaster on record. The earthquake, and more so the subsequent fires, destroyed 45 percent of Tokyo and 90 percent of Yokohama, killing well over 100,000 people. (As always, estimates vary.) The fires no doubt killed more people than the quake itself as the quake occurred around midday, when many people were cooking outdoors on open fires. Descriptions of the conflagration sound like scenes from a fiery hell. Some 38,000 people were incinerated together when they sought refuge in a huge former army clothing warehouse; it was instantly engulfed in the inferno of a massive fire tornado created by the typhoon winds and the roaring fires.

A certain elite saw the earthquake as an opportunity to rebuild the city in a more modern and efficient way, similar to Georges- Eugene Haussmann’s renewal of Paris, with wide boulevards and grand architecture, at the behest of Napoleon III in the 1850s. (Tellingly, Haussmann’s plans have been criticized for creating an overly grandiose city meant for tourists, the wealthy, and the bourgeoisie, with working-class people effectively ignored and marginalized to the periphery of the city.) In its layout and architecture, the new Tokyo was meant to somehow reflect new moral values as well. Haussmann used military cannons to demolish Paris, but for Tokyo, there was no need for cannons: Nature had razed the city.

In fact, the grand plan for heroic and moral reconstruction of Tokyo never came to fruition. The driving force was business interests and the demands of commerce. Business owners had no interest in waiting while elaborate plans were drawn up and debated and rebuilding was executed according to plan. They wanted their businesses back and running as soon as possible, and that meant more or less re-erecting what they had before, perhaps with some minor improvements. They had no interest in a Haussmann-like Tokyo; that might take too long. And they prevailed. Tokyo was rebuilt quickly and with few improvements.

When everything had quieted down in New Orleans after Katrina, there were plenty of people itching to use the opportunity presented by the razing of the city to give New Orleans a makeover. A makeover plan that was included in a report from the Committee for a Better New Orleans became a starting point. For most of the planners, a New Orleans makeover meant changing the demographics as much as the architecture and city layout. That is, in fact, what has happened.

The first attempt to reshape New Orleans came soon after the storm. Called Bring New Orleans Back, or BNOB, it was the product of an advisory panel handpicked by Mayor Ray Nagin. The most influential person on the panel was the real estate mogul Joseph Canizaro. Like many of his colleagues high up in the New Orleans elite, he viewed the damage to the city caused by Katrina as an opportunity. He expressed it this way: “I think we have a clean sheet to start again, and with that clean sheet we have some very big opportunities.”

Others were not as tactful. Richard H. Baker, the ten-term Republican representative from Baton Rouge, was quoted by the Wall Street Journal as saying, “We finally cleaned up public housing in New Orleans. We couldn’t do it, but God did.”

Soon after, he posted a sort of retraction and rewording, saying that he was misquoted and what he “remembered expressing” was “we have been trying for decades to clean up New Orleans public housing to provide decent housing for residents, and now it looks like God is finally making us do it.”

I wonder if Joe Canizaro knew of Haussmann or the postdisaster master planners in Tokyo. I doubt it, but he was following in their path. The logic is, in brief, that the most damaged areas are the most likely to be damaged again (for the same reasons they were so badly damaged in the first place) so the best thing to do is strip people out of those areas. That will keep people safe. Even though they might not want to be moved out, it’s for their own good.

In an article in Mother Jones, Mike Davis argued that the New Orleans elite had long been anxious to purge the “problem people” from the city and tells us that one French Quarter landowner, speaking to Der Spiegel, said, “The hurricane drove poor people and criminals out of the city and we hope they don’t come back.” You can only imagine what was said behind closed doors on New Orleans’ tony Audubon Drive. US housing secretary Alphonso Jackson predicted that the city was “not going to be as black as it was for a long time, if ever again.” It seemed more like a wish than a prediction.

The Washington Post quoted then Republican House Speaker J. Dennis Hastert advocating bulldozing part of New Orleans and Republican senator Rick Santorum suggesting that people should be punished for “ignoring” pre-storm evacuation orders, as if being flushed out of their homes and into the Superdome were not punishment enough.

As one might have predicted and has been written about compellingly by Naomi Klein in particular, cronies of the Bush administration benefited hugely in the reconstruction of New Orleans. Kellogg Brown & Root (KBR), a subsidiary of Halliburton, which was run by Dick Cheney from 1995 to 2000 (but not at the time of Katrina), received tens of millions of dollars in no-bid contracts for reconstruction work at US Navy and other facilities. KBR is the largest nonunion engineering company in the United States and has provided large-scale engineering services globally, including during times of conflict. It was part of a group that provided infrastructure for the military in Vietnam during the war, and it received the contract for cleanup after the 9/11 attack on the World Trade Center towers.

An extremely capable and effective company, KBR has few competitors, and although it has benefited from huge no-bid federal contracts, it has also won many open-bid contracts. It is perfectly possible that KBR would have won the no-bid contracts it was awarded, had they been openly bid. That was more or less the logic, combined with the imperative to move quickly after the disaster—bidding takes a long time, KBR has a proven record in what needs to be done, it will probably win the bid anyway, so why not give it the contract?

The problem, of course, is that under that scenario, no one has any idea if the price of the contract is fair or inflated. The opportunity to overcharge is enormous.

To Richard Campanella, a geographer at the Tulane School of Architecture, New Orleans is becoming gentrified. The mode of gentrification follows that of places like Austin, Texas; Portland, Oregon; and parts of Brooklyn, New York. Young urban rebuilding professionals (YURPs), or, alternatively, the creative class, are attracted to the very rundown and grimy aspect of these areas that make some people want to leave. They start upscale businesses like specialty coffee shops and yoga studios and go to the inevitable Saturday farmers’ market where they talk about “tactical urbanism, the Klezmer musicscene and every conceivable permutation of sustainability and resilience.” Christchurch, New Zealand, experienced the same sort of regeneration following the 2011 earthquake, with young people from out of town starting cultural organizations and businesses in areas that were damaged and saw land prices fall.

In the American Midwest, the disaster that Detroit suffered was economic, due to the decline of manufacturing industries, especially the big US automakers that were the city’s main employers, but post-disaster gentrification has much the same signature as that in New Orleans. The extent of urban blight is huge. Detroit has lost more than a million residents since its peak, and that has meant a vast number of abandoned houses and businesses. Detroit filed for municipal bankruptcy in 2013, the largest such case in US history. Public services are minimal. Most of the streetlights don’t work. Firehouses and schools are closing all over the city.

But, just as in New Orleans, new businesses are starting up, launched by young urban professionals. Detroit even has a new Whole Foods (as does New Orleans), a beacon of gentrification. Some large businesses are growing in Detroit too. Quicken Loans has its headquarters in downtown Detroit. Its owner, Dan Gilbert, has purchased or has long-term leases on 60 buildings in the central business area. Cheap real estate is the reason why you see so many businesses started by young out-of-towners like those Richard Campanella describes starting up businesses in New Orleans. The similarities are striking. And the situations are very different from the sort of reconstruction we saw in San Francisco in 1906 and after the Kanto earthquake.

This sort of revitalization is highly isolated, with pockets of progress amid a sea of stagnation. It is not the sort of development that can bring a whole community forward. It doesn’t create many jobs and interacts only with a few of the more well-to-do people. In Detroit, it has been called a private boom among public blight.

What all these cases reflect is an ordering of society and a geography of poverty and wealth that increasingly put physical and financial distance between the classes. And every disaster, because it harms the lower ranks and merely inconveniences the upper, separates us more and more.

Comment: Haiti is another example of this same colonial mindset. Many residents are still living in squalid disease-ridden tent cities, while the wealthy have built luxury hotels and companies are using the country’s population as slave labor.Haiti “Reconstruction”: Luxury Hotels, Sweat Shops and Deregulation for the Foreign Corporate Elite
‘Where’s the $500 million?’ American Red Cross promises houses for 130,000 Haitians, ‘builds only 6’
Keeping colonialism in place: Haitian police and UN ‘peacekeepers’ fire on protesters