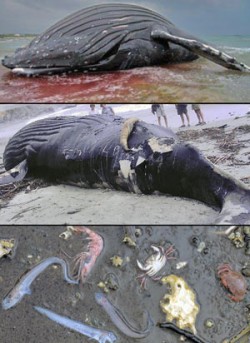 – Skyrocketing deaths on West Coast — Experts: “Extreme Mortality Event… dying in such high numbers… such great numbers… very concerned” — “It’s so mysterious… What is going on here?!” — “Possibilities like fallout from Fukushima” — Only 2 full necropsies on 700 deaths (VIDEOS) (ENENews, Sep 2, 2015):

VOA transcript, Sep 1, 2015 (emphasis added): Sharp Rise in Whale Deaths Being Investigated — “Since May, 30 dead whales have washed ashore on the Gulf of Alaska. (Deborah Fauquier, NOAA): ‘And the average for the whole year generally is 8, so it’s definitely significantly elevated and for us that was a reason for concern.’ The Extreme Mortality Event, as scientists are calling it, has triggered an investigation.”

Huffington Post, Sep 1, 2015: Radiation in the Ocean — The West Coast of the United States seems under siege by negative environmental news… and numerous accounts of unusual coastal events: algae blooms, whale strandings, cancer in seals, collapse of fish stocks, and more… One argument has been the effect of radiation leaking from the [Fukushima] nuclear power plant reactors… and has been thereafter distributed by ocean currents; indeed there is evidence of a plume of increased concentration of Cesium-134, and other radioactive elements that have been observed at unprecedented levels, spreading out some 5,000 miles into the Pacific…  In April of this year, there were headlines declaring that “Fukushima radiation has reached the North American Shore” and concerns were raised, spread through the Internet and press, that this was surely the cause of these otherwise inexplicable anomalous natural events. There is no Federal agency that funds monitoring of radiation in coastal water… So, yes, and no. No definitive conclusion, no clear argument that radiation is the cause of those coastal events which distress us so… The question is immensely important…

A Plus, Aug 27, 2015: The Story Behind This Picture Is So Mysterious, Scientists Are Scratching Their Heads; What is going on here?!… the number has skyrocketed. Thirty whales spanning at least four species have been found… “NOAA Fisheries scientists and partners are very concerned about the large number of whales stranding in the western Gulf of Alaska in recent months,” Dr. Teri Rowles of the NOAA said… these enormous, gorgeous animals are dying in such high numbers.

VOA, Sep 1, 2015: While President Barack Obama is in Alaska, he might have this question: Why have 30 dead whales washed ashore… [NOAA’s] Fauquier said the “extreme mortality event” was complicated… Fauquier noted that in the ocean, toxins move up the food chain.  “Some of the whales actually filter the phytoplankton and the zooplankton… they get the toxins through that method…. as you go higher up the food web, more toxin gets concentrated.”… NOAA hopes to explain why the whales died and why they perished in such great numbers.

Cordova Times, Aug 28, 2015: Whales..Thirty dead whales ….And no one knows why… when thirty of them die in four months, three times the usual rate, something is not right…. between 700 deaths over the years, scientists have managed to perform two full necropsies. For this particular event, they’ve done one limited necropsy… While they keep an eye on algae, they have been testing all possibilities. Possibilities like fallout from Fukushima, and while they did radiation testing as part of the limited autopsy, it came back “with background levels that would occur normally in Alaska,” said Julie Speegle, speaking on behalf of NOAA.

Newsweek, Aug 27, 2015: Over the last few months, dead whales have been appearing regularly on beaches along the Northern California coast. In the same period, 30 whale carcasses have washed up along the coast of Alaska, puzzling scientists.

Washington Post, Aug 30, 2015: Concerns mount as whales are found dead in Gulf of Alaska — Researchers are scrambling to determine what’s behind the death of 30 whales… Other dead whales have been reported off the coast of British Columbia…. starvation or disease could be behind the deaths… The more likely culprit is unusual water conditions.

NPR, Sep 1, 2015: Researchers say record low oxygen levels in Hood Canal are causing marine life to die off. Marine life is struggling to survive… “We have been seeing lots and lots of dead fish on beaches,” said Seth Book, with the Skokomish Tribe’s Department of Natural Resources… “This is really the worst year in terms of the oxygen,” said Jan Newton, an oceanography professor at the University of Washington…

1 thought on “Skyrocketing deaths on West Coast — Experts: “Extreme Mortality Event… dying in such high numbers… such great numbers… very concerned” — “It’s so mysterious… What is going on here?!” — “Possibilities like fallout from Fukushima” — Only 2 full necropsies on 700 deaths (VIDEOS)”