Over the past 48 hours or so, we’ve seen what certainly appears to be visual confirmation of a non-negligible Russian military presence in Syria. For anyone coming to the story late, overt Russian involvement would seem to suggest that the geopolitical “main event” (so to speak), may be closer than anyone imagined. 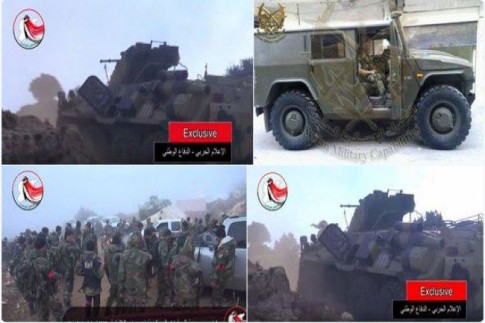 Russia’s excuse for being in Syria is the same as everyone else’s: they’re there, ostensibly, to fight ISIS. As we mentioned yesterday, and as we’ve detailed exhaustively as it relates to Turkey, the fact that ISIS has become a kind of catch-all, go-to excuse for legitimizing whatever one feels like doing is a dangerous precedent and Turkey’s crackdown on the Kurds proves beyond a shadow of a doubt that Islamic State will serve as a smokescreen for more than just the preservation/ouster (depending on which side you’re on) of Bashar al-Assad.

Having said all of that, going into the weekend Russia had yet to confirm publicly that it had commenced military operations in Syria despite the fact that it’s the next closest thing to common knowledge that at the very least, the Kremlin has provided logistical support and technical assistance for a period that probably spans two or more years.

But on Friday, Vladimir Putin looks to have confirmed the scope of Russia’s military role, even if he stopped short of admitting that Russian troops are engaged in combat. Here’s The Telegraph:

Russia is providing “serious” training and logistical support to the Syrian army, Vladimir Putin has said, in the first public confirmation of the depth of Russia’s involvement in Syria’s civil war.

And while the highlighted passage there is actually impossible to prove given that the term “depth” is subjective, it certainly does appear that Putin is now willing to concede that support for Assad goes far beyond “political”. Here’s AFP as well:

Asked whether Russia could take part in operations against IS, Putin said: “We are looking at various options but so far what you are talking about is not on the agenda.”

“To say we’re ready to do this today — so far it’s premature to talk about this. But we are already giving Syria quite serious help with equipment and training soldiers, with our weapons,” RIA Novosti state news agency quoted Putin as saying.

And back to The Telegraph briefly:

Speculation is growing that Russia has significantly expanded its involvement in recent months, including with deliveries of advanced weaponry, a raft of spare parts for existing machines, and the deployment of increasing numbers of military advisers and instructors.

Last week Syrian state television released images showing an advanced Russian-built armoured personnel carrier, the BTR-82a, in combat. Videos have also appeared in which troops engaged in combat appear to shout instructions to one another in Russian.

Of course whether or not the troops Russia has on the ground were sent to Syria with explicit orders to join the fighting is largely irrelevant when the bullets start flying. As Pavel Felgenhaeur, an independent commentator on Russian military affairs told The Telegraph, “it was quite conceivable that members of the advisory mission occasionally found themselves in combat or had even suffered casualties.”

So in other words, they’re at war, and even as Putin is now willing to admit, with a two year (at least) lag, that Russian boots are indeed on the ground, it may be a while before he admits to their role in direct combat and if Ukraine is any guide, he might never acknowledge the extent of Russia’s involvement. But make no mistake, the Russian presence has nothing to do with the “threat” ISIS poses to the world and everything to do with ensuring that Assad’s forces can fight on – at least for now.

The absurd thing about the whole effort is that ISIS itself is now just cannon fodder both for Russia and for the US led coalition flying missions from Incirlik that Turkey has suggested may soon include Saudi Arabia, Qatar, and Jordan. Even more ridiculous is the fact that since none of this has anything to do with eradicating ISIS in the first place, and because ISIS itself got its start as a CIA “strategic asset” in the quest to destabilize the Assad regime, the bombing of ISIS targets by the US, Turkey, and Russia doesn’t really serve much of a purpose at all.

That is, everyone’s just biding time to see how far the other side is willing to go in support of their vision for Syria’s political future – a political future which, as we noted yesterday, almost certainly will not be decided at the ballot box, that is unless it’s after US Marines have stormed Damascus at which point the US will benevolently allow whatever civilians are still alive in Syria to choose between two puppet leaders vetted and supported by Washington.

And lest anyone should forget what this is all about… 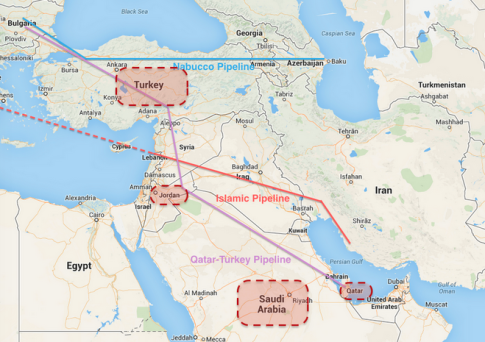