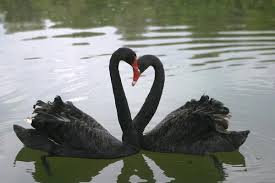 And more is coming where that came from.

You can’t say Nassim Taleb didn’t warn you: the outspoken academic-philosopher, best known for his prediction that six sigma “fat tail”, or black swan, events happen much more frequently than they should statistically (perhaps a main reason why there is no longer a market but a centrally-planned cesspool of academic intervention) just had a black swan land smack in the middle of the Universa hedge fund founded by ardent Ron Paul supporter Mark Spitznagel, and affiliated with Nassim Taleb.

The result: a $1 billion payday, translating into a 20% YTD return, in a week when the VIX exploded from the teens to over 50, and which most other hedge funds would love to forget.

Universa Investments LP gained roughly 20% on Monday, according to a person familiar with the matter, a day when the market collapsed more than 1,000 points in its largest ever intraday point decline. Universa’s profits—some realized and some on paper—amounted to more than $1 billion in the past week, largely on Monday, as its returns for the year climbed to roughly 20% through earlier this week.

“This is just the beginning,” said Universa founder Mark Spitznagel, a longtime collaborator with Mr. Taleb, who advises Universa, lectures at New York University and is known for his pessimistic forecasts about the global economy. Mr. Spitznagel himself has spent the last several years warning of a coming correction, one he viewed as inevitable given accommodative policies by central banks around the world.

“The markets are overvalued to the tune of 50% and I’ve been saying that for some time,” said Mr. Spitznagel.

Universa gained renown for its outsize gains in 2008, racking up more than 100% profits for many of its clients. In 2011, it notched around 10% to 30% gains for clients. During the years in between it posted steady, small losses.

The firm focuses on finding cheap, shorter-dated options on the S&P 500 and other instruments it expects to rise in value amid a notable downturn.

During the past week, the value of such options that Universa bought over the past one to two months jumped, said people familiar with the matter.

The Miami-based Universa and some other “black swan” hedge funds that seek to reap big rewards from sharp market downturns have emerged as winners amid the world-wide volatility of the past week, say their investors, racking up double digit gains in roughly the past week.

Incidentally, this is precisely what a “hedge” fund should do: protect against massive, “fat tail” days like this Monday; instead they merely ride the beta train with the most leverage possible, hoping that the Fed will prevent any events that actually need hedging, and blow up in a fiery crash any time the market tumbles. Needless to say this makes most of them utterly useless, especially since one can just buy the SPY for almost nothing, and avoid paying the hefty 2 and 20 (or 3 and 45) fee, which until recently was merely there to fund trading based on inside information aka “expert networks” and “idea dinner” thesis clustering.

And speaking of non-hedging “hedge” funds, the table below lays out the performance of some of the most prominent names through either Friday of last week, or as of mid-week. You will notice three things: i) a lot of minus signs for entities that supposedly “hedge” market drops, ii) Bill Ackman’s Pershing Square, which until last month was among the best performers, was – as of Wednesday – down for the year, and iii) Ray Dalio’s “risk parity” quickly has become “risk impairty” in an environment where both stocks were sold by the boatload, at the same time that China was dumping US treasurys – a scenario no “risk parity” fund is prepared for. 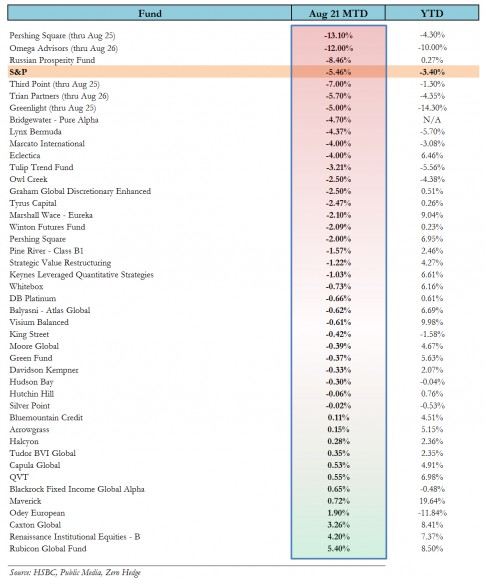