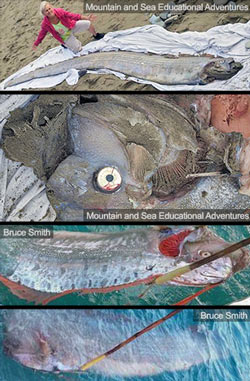 Los Angeles Times, Aug 17, 2015 (emphasis added): Biggest oarfish seen at Catalina Island in years washes ashore… marking a rare sighting of the deep-sea creature… [It] was 24 feet long when it was alive, said Annie MacAulay, a marine biologist… its tail [was] severed off — which oarfish have been known to do to shed weight and save energy, she said… The one found Monday had an empty pocket in its stomach, which MacAulay said could mean it recently stopped eating, a potential sign of distress or sickness… a handful of oarfish [have] washed up on California’s coasts in recent years.

New York Daily News, Aug 17, 2015: Stunned scientists fished for clues Monday to explain the origin of the giant oarfish that washed up on the shores of Catalina — the third massive marine oarfish found on the island in two years’ time [see articles below for additional finds]… The sleek silver fish was missing its pectoral fins and tail… perplexed researchers are looking for a reason why. Dr. Misty Paig-Tran from California State University Fullerton collected tissue samples… to determine whether it had any toxins in its system. But questions still remain as to why these fish are dying… The conservationist also speculated that water pollution could be to blame.

OC Register, Aug 19, 2015: This is the third oarfish to be documented on the island [since] 2013… MacAulay said the animal didn’t come to shore because of an illness or shark attack. When she dissected the fish, she discovered a belly full of krill… “It’s very strange, and the other one in June was the same,” she said.

Gazettes (Long Beach), Aug 19, 2015: MacAulay said this is the third such creature to wash up on the island in the past two years…. Before then, MacAulay said she isn’t aware of any others… … Sightings are extremely rare. Those that come near the shore are usually distressed.

AP, Aug 19, 2015: Residents of Santa Catalina Island have found a second sea monster on their shores in just three months… {MacAulay] says to see two in a three-month period after never seeing one her entire career is incredibly exciting.

Mountain and Sea Educational Adventures, Aug 17, 2015: Unbelievable! The second oarfish that we found washed up on the shores of Catalina Island.

San Diego Reader, Jun 30, 2015: First-ever oarfish caught on rod… That it was in shallow water for an oarfish gives the implication that it was unhealthy… crew tried to gaff and raise the 20-foot fish to the boat. The soft flesh only tore, and they had to give up…

Pete Thomas Outdoors, Jul 8, 2015: The bizarre catch… was snagged and barely alive… a crewman attempted to collect it with a gaff, but the flesh was too soft for the gaff to hold… for some reason Catalina has become a hot spot for sightings.

Bruce Smith, captain of sport fishing boat, Jun 29, 2015: “We caught an oarfish… at Catalina… in shallow water like 5 fathoms [30 feet]… It was pretty much dead… I know they washed up on the beach here a couple times… It was very surprising, it’s a once in lifetime thing.”

Los Angeles Times, Jun 3, 2015: Rare oarfish found dead on Catalina… The first sighting of a live oarfish was only recorded 2001, when one was caught on film by the U.S. Navy…