Turkey’s lira is once again in free fall, after testing all-time lows against the dollar during multiple sessions of late as political turmoil and civil war wreak havoc on the currency.

On Tuesday, the central bank failed to hike rates and delivered what was generally said to be a confused set of guidelines for navigating the normalization of monetary policy in developed markets. On Wednesday, news that the timing of a rate hike will now depend on the Fed looks to have put pressure on TRY.

In short, a perfect storm of political upheaval, indeterminate monetary policy, and growing violence between Ankara and the country’s Kurdish population have conspired to send the lira on a terrifying ride and as you’ll note from the headline roundup presented below, it looks as though things are going to get a whole lot worse before they get better. 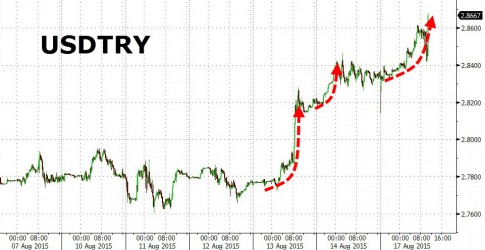 Some useful color from BofAML:

CBT Governor Basci announced earlier that the monetary policy would be normalised and that has built the expectations for a pre-emptive move from the MPC in today’s meeting. However, the published road-map is unlikely to convince the market that CBT will tighten enough in a timely manner to stop TRY from weakening.

Now that the CBT has left rates unchanged and announced that it will largely rely on selling more FX to tame volatility in FX market while waiting Fed to hike first, TRY still remains a fair game. We expect 150bp hikes in policy rate this year and 100bp in 2016, but the first hike is likely to move forward as we expect Fed to hike in September.

The main change in the rate decision announcement is CBT’s clear statement that monetary policy is going to tighten further in the coming months. The main reason behind such a tightening is the pressure on core inflation due to weaker TRY, despite lower food and energy prices. CBT keeps mentioning that the pace of the tightening will depend on the rate normalisation globally (read it as Fed hikes) and the improvement in inflation outlook.

CBT has announced its long-awaited road-map for the normalisation of the monetary policy and we believe it’s likely to disappoint the markets because it’s too gradual. CBT says that they will gradually narrow the ON corridor symmetrically around the policy rate after Fed starts hiking rates. Before doing so, they will sell more dollars in daily auctions. They will also eliminate the discounted funding facility to primary dealers to simplify the

framework, but that will keep the effective cost of funding unchanged. Therefore, TRY is not getting any tighter until CBT starts hiking rates.