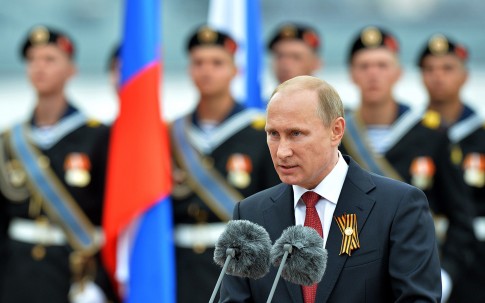 Following the 2014 Crimean referendum which saw the Black Sea peninsula join Russia shortly after the Ukraine presidential coup and ensuing territorial conflict between pro-Kiev and pro-Moscow regions, many speculated it is only a matter of time before the Donetsk region, subsequently elevated into People’s Republic status, which has been engaged in constant warfare with the Kiev army (which is in such bad shape it recently drafted a disabled man without arms) would follow suit.

We now have the answer.

Having waited for over a year for the Ukraine civil war/conflict to be relegated to back page status, if that, Putin has finally given the green light, and as Xinhua reports, leaders of the self-proclaimed “Donetsk People’s Republic” are planning to hold a referendum on seceding from Ukraine and joining Russia, the Donetsk-based Ostrov news agency reported Wednesday.

The referendum is scheduled to take place some in early to mid November, or specifically two to four weeks after the Oct. 18 local elections, said the news agency.

The ballot papers for the referendum designed in the colors of the Russian flag have already been printed, it said.

And while neither the rebel leadership nor the Ukrainian authorities have commented on the report yet, the modus operandi is strikingly familiar to what happened in Crimea.

Should Donetsk indeed proceed with a popular secession vote, the result is virtually assured but the bigger question is just how would Europe react considering this would result in another territorial expansion of Russia which would be accused of annexing a region that Kiev has largely given up even pretending it has control over.

In July, leaders of pro-independence insurgents in Donetsk region said they would hold local elections on Oct. 18 without Kiev’s supervision as they believed that the Ukrainian government has not fulfilled its obligations under the Minsk peace agreement.

Last week, violence in eastern Ukraine has sharply escalated after several weeks of relative calmness. On Sunday night, at least 11 people, including nine civilians, were reportedly killed in Donetsk region, marking the worst casualties in the conflict since early June.

Then again, after the recent referendum farce in Greece in which a substantial majority of the population voted for one thing just to get the opposite, maybe history is about to rhyme a few hundred kilometers northeast of Athens.