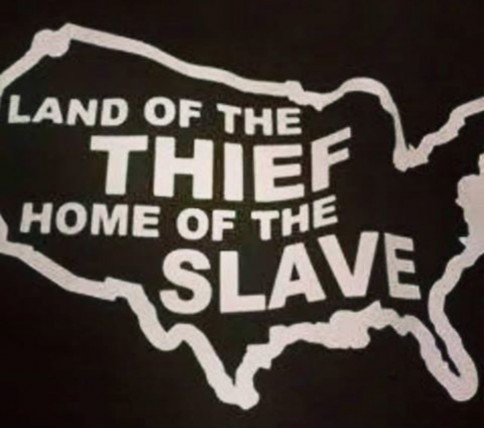 – The Oligarch Recovery – Renting in America is Most Expensive Ever (Liberty Blitzkrieg, Aug 13, 2015):

Characterizing the upward transfer of virtually all American wealth to a handful of oligarchs a “recovery,” represents a grotesque insult to the english language as well as common sense.

The writing was on the wall from the very beginning. I knew as soon as TARP passed that we as society would regret the day we bailed out the bankers who destroyed the world economy. It didn’t take long.

Bailed out Wall Street banks went ahead and paid themselves record bonuses less than one year after the bailouts. Then, in early 2013, the financial community’s next scheme to feed off the carcasses of the American public became crystal clear. They wanted to become America’s slumlord by buying millions of foreclosed homes and then renting them back to former homeowners. When I realized what was happening I published the post, America Meet Your New Slumlord: Wall Street. Here’s the opening paragraph:

Well they aren’t really your “new” slumlord in the sense you have been debt slaves to the financials system for decades.  What I really mean is that it is now becoming overt and literal.  Literal because financiers are now the main players in the real estate market and are buying all the homes ordinary citizens were kicked out of over the past few years.  Yep, we bailed out the financial system so that financiers with access to cheap credit can buy up all of America’s real estate so that they can then rent it back to you later.

Two and a half years later, the results are clear. Landlords getting paid, renters getting shafted. As Bloomberg reports:

Americans living in rentals spent almost a third of their incomes on housing in the second quarter, the highest share in recent history.

Rental affordability has steadily worsened, according to a new report from Zillow Group Inc., which tracked data going back to 1979. A renter making the median income in the U.S. spent 30.2 percent of her income on a median-priced apartment in the second quarter, compared with 29.5 percent a year earlier. The long-term average, from 1985 to 1999, was 24.4 percent.

While mortgages remain relatively affordable, landlords have been able to increase rents because demand for apartments remains strong. The U.S. homeownership rate fell to the lowest level in almost five decades in the second quarter, as strict lending standards and tight inventories keep many families in the rental market. 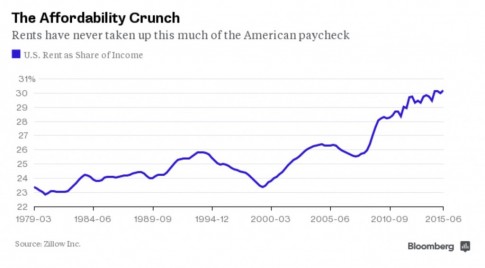 What do you expect to happen when you bailout sociopathic criminals?

Welcome to the Housing Recovery: Rents are Rising, Incomes are Falling