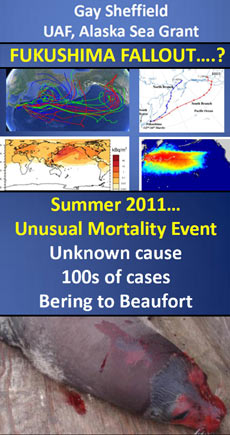 – US Gov’t Expert: Fukushima is always on people’s minds… a lot of concern and worry about radiation’s role in unusual marine deaths — Reports of shrunken or enlarged organs, black kidneys, sores on liver, slime in mouth, discolored skin — Mortality in intertidal zone like “we haven’t seen before” (VIDEO) (ENENews, Aug 11, 2015):

Gay Sheffield, NOAA Sea Grant (US Dept. of Commerce) marine advisory agent, July 2014 at 31:00 in (emphasis added): “I’m here in Bering Strait and I know there’s people [on this call] from all over the state, so they may not be familiar with some of our events. Right after Fukushima blew, we had, and still sort of have… an unusual mortality event with four species of seals in this region, all the way from Bristol Bay, up to Barrow (the Russian side), and all the way into Canada… A lot of people were curious, because we have never been able to find an infectious disease. A lot of people were concerned and worried that this Fukushima radiation had some effect… Fukushima is a big concern in this region… Fukushima is always on people’s minds… Here’s the cover of the Nome Nugget, that’s our newspaper here, and the top story was the lack of radiation monitoring was really annoying people — that we had nothing, nothing was being done. It was a concern all the time on people’s minds — with the seals, with the birds, and what not… it was making the front news of the paper. I hope that lets others know that the concern people have in Western Alaska… it’s a big thing.”

A long list of unusual events soon after Fukushima may explain why it’s “always on people’s minds” in Alaska: