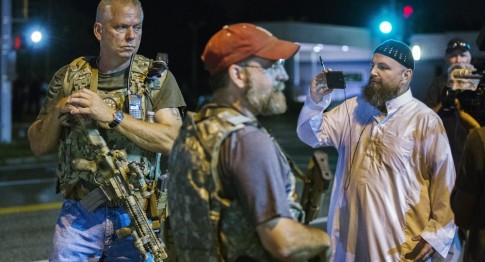 In the midst of an already tense night in Ferguson, a vigilante group of four heavily armed white men are now patrolling the streets. Described as a “fiercely anti-government, militaristic group,” the self-proclaimed “Oath Keepers” were reportedly hired by a conservative media organization to protect a single journalist in the event of violence.

Ferguson saw its first wave of unrest last August, following the shooting death of unarmed teen Michael Brown by Darren Wilson. Riots erupted, a curfew imposed. Dozens were arrested, including journalists, and in the aftermath, much of the violence was blamed on a militarized police force which unnecessarily inflamed the situation.

One year later, Ferguson is still seeing its share of unrest.  On Sunday, a day of peaceful protests turned into riots, and many still felt that was largely the result of police antagonizing protesters.

But now a new factor could add to tensions in a racially charged environment: a group of four white men, voluntarily patrolling the streets with military-grade weaponry.

They call themselves the “Oath Keepers,” an organization of former military, police, and first responders, who seek to “defend the Constitution against all enemies, foreign and domestic.”They wear bulletproof vests and communicate through two-way radios. They carry pistols attached to their hips as a secondary measure. Their primary tools are automatic assault rifles.

“I’m happy that we’re able to defend ourselves. It’s been our right for a long time,” one member told NBC, speaking about the state’s open carry laws. Missouri allows licensed individuals to openly carry firearms, provided they’re not doing so in an “angry or threatening manner,” though that caveat is certainly up for interpretation.

While they may consider themselves as defenders of freedom, others have a hard time seeing them as anything other than a right-wing militia fueled by a shared love of the Second Amendment. The Southern Poverty Law Center, a civil rights organization, has described the group as a “fiercely anti-government, militaristic group.”

“Their presence was both unnecessary and inflammatory,” St. Louis County Police Chief Jon Belmar said, according to Reuters.

Others in the community had similar sentiments, questioning the wisdom of introducing a hostile presence into an already inflamed situation.

“You’re going to bring some uncommissioned citizens, white citizens, into a black community like this? It’s disrespectful,” Talal Ahmad, who took part in last year’s protests, told Reuters. “Here, in a black neighborhood, we’re already living in a state of terror.”

Still, the question remains: who did send in the civilian cavalry?

The Oath Keepers made headlines last month when the group took it upon itself to guard military recruitment centers. Blaming the US government for failing to prevent a shooting which left four dead in Tennessee, the Oath Keepers took up arms before local authorities asked them, politely, to please stop.

It’s entirely possible that the organization’s emergence in Ferguson is a similar voluntary fashion. But according to the leader of the group, known only as John, the Oath Keepers were present to protect a journalist from conservative website Infowars.

“There were problems here, there were people who got hurt. We needed to be prepared for that,” John said, according to Reuters.

Infowars has denied any affiliation with Oath Keepers.

“Despite the remark by ‘John,’ Infowars did not hire the Oath Keepers to protect its journalists reporting from the embattled Missouri city,” reads a statement from the website. “The Oath Keepers went to Ferguson on their own without consulting with Infowars.”

The website also claims that the allegations are an attempt by the mainstream media to link Infowars with extremist groups.

Over twenty people were arrested during skirmishes on Monday night. This followed dozens of arrests earlier in the evening, as demonstrators gathered outside of the St. Louis County Federal Courthouse and blocked traffic along Interstate 70.

Rumors are circling among activists on the ground that local authorities are considering the implementation of curfew for Tuesday night. Given that the events of Monday night were relatively mild, a curfew may only serve to exacerbate the situation.