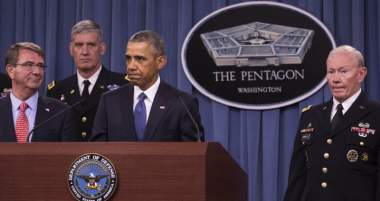 Everybody has heard of the group of barbarians styling themselves the Islamic State, or ISIS, or, ISIL, or whatever they’re calling themselves this week. These savages are still butchering their way through huge segments of Iraq and Syria with U.S. weapons. What fewer people know about is that this terrorist group is largely the Frankenstein creation of the Obama administration’s so-called “anti-ISIS” coalition.

But don’t take my word for it. So far, we’ve had Vice President Joe Biden, U.S. Joint Chiefs of Staff Chairman Martin Dempsey, and the U.S. Defense Intelligence Agency reveal the fact that the anti-ISIS coalition armed, trained, and funded ISIS — and that they wanted an Islamic State in Eastern Syria to destabilize the regime of Bashar al-Assad. Don’t believe me? Here’s what Biden revealed in a 2014 speech at Harvard:

The idea of identifying a “moderate middle” has been a chase America’s been engaged in for a long time…. The fact remains that the ability to identify a “moderate middle” in Syria was — there was no “moderate middle” because the “moderate middle” are made up of shopkeepers, not soldiers…. What my constant cry was was that our biggest problem was our allies…. What were they doing? They were so determined to take down Assad and have a proxy Sunni-Shia war, what did they do? They poured hundreds of millions of dollars and tens, thousands, of tons of weapons into anyone who would fight. Except that the people who were being supplied were al-Nusra and al-Qaeda and extremist elements of jihadis coming from other parts of the world.

How and Why Obama’s ”Anti-ISIS Coalition” Created ISIS

(View more videos from The New American)Did you catch that? There were no moderate rebels in Syria, despite Obama’s claims to be arming moderate rebels against Assad. Again, according to Biden, the anti-ISIS coalition was arming ISIS.I know, I know, Biden, who’s often ridiculed as Obama’s impeachment insurance, can’t always be taken seriously. Here’s what General Dempsey had to say about this:

General Dempsey: It really comes down to building a coalition so that what the Arab Muslim world sees is “them” rejecting ISIS, not…

General Dempsey: I know major Arab allies who fund them.

So there you have it from America’s most senior military leadership, too.

But is this all some new revelation that took the White House by surprise? Not even close. Judicial Watch recently obtained an explosive document from the Defense Intelligence Agency exposing the fact that the West, along with Arab and Muslim regimes in Obama’s anti-ISIS coalition, knew that al-Qaeda and other terror groups were leading the rebellion against Assad from the start. The report says, “The Salafist, the Muslim Brotherhood, and AQI [Al Qaeda in Iraq] are the major forces driving the insurgency in Syria.”

The report also reveals that the anti-ISIS coalition wanted to see an Islamic State in Eastern Syria.

Again I quote: “The West, Gulf countries, and Turkey support the Syrian opposition.” The document goes on: “There is the possibility of establishing a declared or undeclared Salafist principality in Eastern Syria, and this is exactly what the supporting powers to the opposition want, in order to isolate the Syrian regime.”

Of course, that is also exactly what happened when ISIS declared the establishment of its “caliphate” in Eastern Syria and parts of Iraq. The document also predicts what would happen with stunning accuracy, saying: “This creates the ideal atmosphere for al-Qaeda Iraq to return to its old pockets in Mosul and Ramadi, and will provide a renewed momentum under the presumption of unifying the jihad among Sunni Iraq and Syria, and the rest of the Sunnis in the Arab world.” And the document goes on from there.

Does all of that sound familiar? It should. But remember, this document was from 2012, which was very early on in the war against Syrian dictator Assad, who of course used to be a U.S. ally in the terror war.

Now, if you have been reading The New American magazine all those years, none of this is a surprise to you, because we, along with other quality alternative media outlets, have been reporting this from the start. If you get your news from the establishment press, though, I understand your shock and frustration at just learning about this now.

Something very similar happened in Libya, too, where Obama and NATO, acting on an illegitimate UN resolution, rather than a constitutionally required declaration of war from Congress, overthrew their terror-war ally Muammar Gadhafi by backing actual al-Qaeda leaders who openly bragged about having fought U.S. troops in Iraq and Afghanistan.

Had enough of this insanity and criminality? Demand that Congress follow the Constitution and adhere to the non-interventionist foreign policy advocated by our Founders. And subscribe to The New American magazine to stay informed.