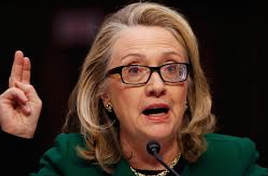 Hillary Clinton, who just months ago was for all intents and purposes running unopposed in a bid to return to The White House, only this time around as President, has discovered that the controversy surrounding her handling of sensitive information will likely prove to be a very serious issue for voters going forward.

An attempt to restore the public trust by releasing thousands of pages of e-mails only exacerbated the situation, as some who reviewed the correspondence sent from the former Secretary of State’s private e-mail server now say that although none of the transmitted information was classified at the time it was sent, there are accepted (if sometimes unwritten) standards that top diplomats are expected to follow and Clinton almost certainly did not follow protocol.

On Tuesday, the story took a new turn when Clinton, bowing to pressure from GOP lawmakers, turned over her private e-mail server and a thumb drive to the FBI. This, apparently, will allow a “neutral third party” the verify Clinton’s claims that all of her work-related mail has been turned over to the State Department. Here’s WSJ:

Hillary Clinton is turning over to federal authorities the private computer server she used to handle her emails when she served as secretary of state, an unexpected move and an attempt to quash concerns that her unorthodox approach included insufficient safeguards to protect government secrets.

A spokesman for Mrs. Clinton’s presidential campaign on Tuesday said she had directed her team to give to the Justice Department both the computer server—which had been kept at her home in Chappaqua, N.Y.—and a thumb drive containing copies of her emails.

Mrs. Clinton’s decision to relinquish her computer server is a surprise twist in a controversy that has shadowed her presidential bid. For months she has rebuffed congressional Republican leaders who have called on her to turn over the server to a neutral third party to verify her assertion that she had given the State Department all her work emails.

Needless to say, Republicans believe the gesture is too little, too late:

“It’s a welcome development, but it’s hard to believe that the Clinton private server and the thumb drives in the possession of Ms. Clinton’s personal lawyer have just recently been turned over to the authorities,” said Sen. Chuck Grassley (R., Iowa), chairman of the Senate Judiciary Committee. “That’s a long time for top secret classified information to be held by an unauthorized person outside of an approved, secure government facility,” added Sen. Grassley, who has been inquiring about steps taken to secure any classified material on Mrs. Clinton’s email system.

As detailed by Peter Van Buren earlier this month for Reuters, “What matters in the world of secrets is the information itself, which may or may not be marked “classified.” Employees at the highest levels of access are expected to apply the highest levels of judgment, based on the standards in Executive Order 13526. The government’s basic nondisclosure agreement makes clear the rule is “marked or unmarkedclassified information. In addition, the use of retroactive classification has been tested and approved by the courts, and employees are regularly held accountable for releasing information that was unclassified when they released it, but classified retroactively.”

As it turns out, some of the e-mail in question may now count as classified, and after investigators discovered several such correspondence in a relatively small sample of the documents Clinton turned over, the matter was referred to the Justice Department and the FBI.

Turning over the servers and thumb drive is another effort to put the issue to rest and Clinton’s campaign says she will “cooperate with the government’s security inquiry, and if there are more questions, we will continue to address them.”

And there very well could be more questions and not just from Republican lawmakers.

The issue looks to be costing Clinton at the polls as voters see the e-mail drama as evidence that the former First Lady can’t be trusted. On that note, we’ll leave you with the following from the Hill, which serves to underscore the fact that Clinton may be beatable after all:

Sanders has eclipsed Clinton by a 44 to 37 percent margin, according to a new Franklin Pierce University/Boston Herald poll that was first reported by the Boston newspaper Tuesday evening.

The previous FPU/Herald poll taken in March had Sanders trailing Clinton 44 to 8.

Today’s poll is the first to show Sanders, whose liberal policies are popular with the Democratic base, ahead of Clinton in New Hampshire.

And it comes as reports surfaced that Clinton will turn over her private email server that she used while leading the State Department to Justice Department officials.