They now fund ISIS, and say they’re AFRAID of ISIS and the Mistrales will help them in their battles with ISIS. 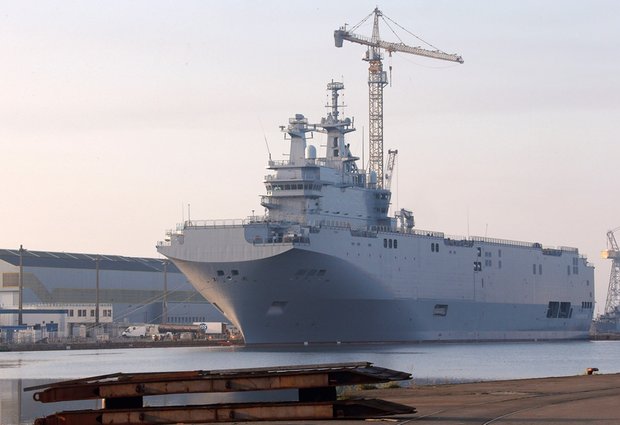 Egypt and Saudi Arabia are eyeing two Mistral warships that France originally sold to Russia before backing out of the deal, Agence France-Presse reported Friday, citing an unnamed French official. The two Sunni Arab nations are grappling with regional threats posed by militants like the Islamic State group, and Saudi Arabia has been deeply unsettled by a recent nuclear deal between Shiite Iran and Western leaders.

“Egypt and Saudi Arabia are desperate to buy two Mistrals,” the official told French newspaper Le Monde, AFP reported. “King Salman of Saudi Arabia wants to build a fleet in Egypt which could project regional power in the Red Sea and Mediterranean,” the source added, noting that other countries in the Middle East are also interested in building a regional naval force.

Egypt and Saudi Arabia signed an agreement, dubbed the Cairo Declaration, at the end of July to foster joint communication and cooperation on matters of national security. Those efforts would take place “at the highest levels between the two countries,” a statement by the Saudi Press Agency said. As part of the declaration, the two countries also agreed to create a joint Arab military force.

France was originally scheduled to deliver two 650-foot Mistral warships, amphibious vessels that can transport helicopters, to Russia by the end of 2015, but it backed out over concerns about Moscow’s backing of separatist rebels in the conflict in Ukraine. The deal was worth about $1.3 billion.

Egypt has been struggling to quell the rising threat of the Islamic State group in the Sinai Peninsula, where militants from the group carried out a string of coordinated attacks July 1 that killed 17 Egyptian soldiers. The group has claimed responsibility for other recently deadly assaults in North Africa and Kuwait, far from its stronghold in Syria and Iraq. The group, also known as ISIS or ISIL, also has a growing presence in Libya, which lies just west of Egypt. The United States recently delivered eight F-16 fighter jets to Cairo, and in December, the U.S. sent Cairo 10 Apache helicopters.

For Saudi Arabia, the nuclear deal signed with Iran mid-July sparked worries that the agreement would enhance Iran’s ability to fund proxy groups that Saudi Arabia considers threats to its interests. Iran backs Houthi rebels in Yemen, for instance, while Saudi Arabia has been leading airstrikes to prop up the Sunni regime there.

“At this current period which the Arab world is facing, we need to work together, because the threats are many, and we will not overcome them unless we work together,” Egyptian President Abdel-Fattah el-Sisi said about the Cairo Declaration. “Egypt and Saudi Arabia are the two pillars of Arab national security, and together we can confront these challenges,” he added. Military ties between the countries have depeened since Sisi ousted the democratically elected Mohammed Morsi, a leader of the Muslim Brotherhood, which Saudi Arabia opposes.