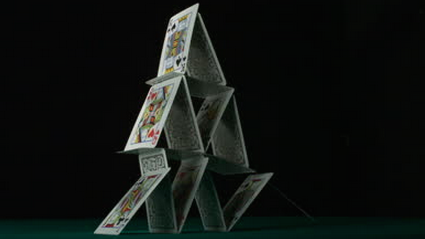 One of the reasons why the Chinese dragon quite often appears to be chasing its own tail is that the country is trying to re-leverage and deleverage at the same time.

Take China’s local government debt refi effort for instance. Years of off-balance sheet borrowing left China’s provincial governments to labor under a debt pile that amounts to around 35% of GDP and thanks to the fact that much of the borrowing was done via LGFVs, interest rates average between 7% and 8%, making the debt service payments especially burdensome. In an effort to solve the problem, Beijing decided to allow local governments to issue muni bonds and swap them for the LGFV debt, saving around 400 bps in interest expense in the process. Of course banks had no incentive to make the swap (especially considering NIM may come under increased pressure as it stands), and so, the PBoC decided to allow the banks to pledge the new muni bonds for central bank cash which could then be re-lent into the real economy. So, China is deleveraging (the local government refi effort) and re-leveraging (banks pledge the newly-issued munis for cash which they then use to make more loans) simultaneously.

We can see similar contradictions elsewhere in China’s financial markets. For instance, Beijing has shown a willingness to tolerate defaults – even among state-affiliated companies. This is an effort (if a feeble one so far) to let the invisible hand of the market purge bad debt and flush out failed enterprises. Meanwhile, Beijing is enacting new policies designed to encourage risky lending. In April for instance, the PBoC indicated it was set to remove a bureaucratic hurdle from the ABS issuance process, which means that suddenly, trillions in loans which had previously sat idle on banks’ books, will now be sliced, packaged, and sold. Specifically, the PBoC said regulatory approval would no longer be required to issue ABS (hilariously, successive RRR cuts have served to reduce banks’ incentive to package loans, but we’ll leave that aside for now). Once again, deleveraging (tolerating defaults) and re-leveraging (making it easier for banks to get balance sheet relief via ABS issuance), all at once.

There’s a parallel between this dynamic and what’s taking place in China’s equity markets. That is, a dramatic unwind in the half dozen or so backdoor margin lending channels (a swift deleveraging) has been met with a government-backed effort to prop up the market via China Securities Finance Corp., which has been transformed into a state-controlled margin lending Frankenstein that could ultimately end up with some CNY5 trillion in dry power (a mammoth attempt at re-leveraging).

Now, the PBoC will look to supercharge efforts to re-engineer a stock market bubble via leverage by pushing brokerages to issue ABS backed by margin loans. Here’s The South China Morning Post:

The product is due to be listed and sold to investors through the Shanghai Stock Exchange.

The minimum investment for the product is 100,000 yuan, with exposure of a single borrower capped at 5 per cent. Investors will bear the risks for gains and losses in the underlying portfolio.

Approval to mainland brokerages to securitise margin loans was given by the China Securities Regulatory Commission on July 1. Brokerages have been encouraged to raise capital via securitisation to help them recapitalise.

A couple of things should be obvious here. First, this sets up the possibility that a perpetual motion margin doomsday machine is being created. That is, if brokerages simply offload the margin loan risk to investors and use the proceeds to fund still more margin lending which can also be turned into still more ABS, and so, then the effect will be to pile leverage on top of leverage on the way to constructing a monumental house of cards. Beyond that though, one certainly wonders what happens in the event the underlying stocks become completely illiquid (i.e. Beijing decides to suspend trading on three quarters of the market again). Here’s a bit more from Bloomberg:

China’s first asset-backed security tied to stock margin loans is raising concern that authorities are fueling new risks as they attempt to reverse an equities slump.

China is increasingly opening to ABS, having reversed course in 2012 to allow sales regulators had banned in 2009 after the products helped spark the global financial crisis. Investor concern has mounted that unintended risks could spread after unprecedented state intervention to help staunch the stock slide that wiped out as much as $4 trillion.

“The risk could be that brokers may not be able to execute forced liquidations in case of sharp declines in the overall stock market,” said Shujin Chen, a banking analyst at DBS Vickers Hong Kong Ltd. “Liquidity risk can also be a problem if there are too many stocks that suspend trading, as happened in July.”

“So far we don’t know how the brokerages are going to use the proceeds,” said Gao Qunshan, an analyst at Tianfeng Securities Co. “It can be positive if they are using the funds to develop new businesses but negative for China’s financial market if they keep lending out for margin financing.”

Yes, it certainly “could be a negative if they keep lending out for margin financing,” which they most certainly will if not of their own accord then by PBoC decree.

And the punchline: the senior tranche (which accounts for CNY475 million of the total CNY500 million deal) is rated AAA.