– One Third Of All Chinese ‘Gamblers’ Have Shut Their Equity Trading Accounts (ZeroHedge, Aug 6, 2015):

It turns out making money trading stocks is not “easier than farmwork” and, as China Daily reports, a stunning 24 million Chinese ‘investors’ have shuttered their trading accounts since the end of June. Unlike in the U.S., where institutions dominate stock trading, retail investors are king in China, owning around 80% of listed stocks’ tradable shares, according to investment bank CICC. With the number of small investors holding stocks in their accounts sliding to 51 million at the end of July from 75 million at the end of June, it appears some grandmas and farmers have learned their lesson (for now). 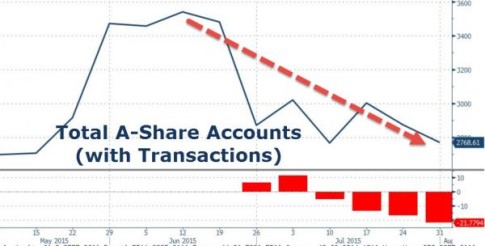 But, as The Wall Street Journal reports, China’s market selloff can safely be declared a rout.

But bank deposit is still the favorite investment tool for Chinese families. As China Daily notes,

Up to 50 percent of disposable income will end up in families’ saving account, according to data from World Bank. Due to recent volatility, it is unlikely that many families will move their money from saving account to stock market.

“Now I realize I can lose a lot of money very quickly,” he said, noting that threats to stocks include China’s slowing growth and the eventual end of government rescue efforts.

But – there remains some who will never learn…

“Where else can I put my money?” said Helen Lu. “Real estate is so expensive and beyond our reach, and there are no other good investment channels.”