When the regime stays in power but loses its ability to rule. This is the current objective of US policy in Syria, to undermine Syrian President Bashar al Assad’s ability to govern the country without physically removing him from office. The idea is simple: Deploy US-backed  “jihadi” proxies to capture-and-hold vast sections of the country thereby making it impossible for the central government to control the state. This is how the Obama administration plans to deal with Assad, by making him irrelevant.  The strategy is explained in great detail in a piece by Michael E. O’Hanlon at the Brookings Institute titled “Deconstructing Syria: A new strategy for America’s most hopeless war”. Here’s an excerpt:

“…the only realistic path forward may be a plan that in effect deconstructs Syria….the international community should work to create pockets with more viable security and governance within Syria over time… The idea would be to help moderate elements establish reliable safe zones within Syria once they were able. American, as well as Saudi and Turkish and British and Jordanian and other Arab forces would act in support, not only from the air but eventually on the ground via special forces. The approach would benefit from Syria’s open desert terrain which could allow creation of buffer zones that could be monitored for possible signs of enemy attack. Western forces themselves would remain in more secure positions in general—within the safe zones but back from the front lines—at least until the reliability of such defenses, and also local allied forces, made it practical to deploy and live in more forward locations.

Creation of these sanctuaries would produce autonomous zones that would never again have to face the prospect of rule by either Assad or ISIL….

The interim goal might be a confederal Syria, with several highly autonomous zones… The confederation would likely require support from an international peacekeeping force….to make these zones defensible and governable, to help provide relief for populations within them, and to train and equip more recruits so that the zones could be stabilized and then gradually expanded.”

Isn’t this the basic gameplan that is unfolding in Syria today?

Notice how O’ Hanlon never considers the moral implications of obliterating a sovereign nation, killing tens of thousands of civilians, and displacing millions of others. Those kinds of things simply don’t matter to the pundits who concoct these imperial strategies. It’s just grist for the mill.  Notice, also, how the author refers to “buffer zones and “safe zones”, the same terms which have been used repeatedly in relation to Turkey’s agreement with the US for the use of Turkey’s Incirlik air base. Turkey wants the US to assist in the creation of these safe zones along Syria’s northern border to protect it from attack and to create a sanctuary for the training so called “moderate” militants to be used in the war against ISIS. As it happens, these prospective safe zones are a vital part of O’Hanlon’s broader plan to break the state into a million disconnected enclaves ruled by armed mercenaries, al Qaida affiliates, and local warlords. This is Obama’s dream of a “liberated Syria”, an anarchic failed state sprinkled with US military bases where massive resource extraction can take place unimpeded.  What Obama wants to avoid at all costs, is another embarrassment like Iraq where the removal of Saddam created a  security vacuum that led to a violent and protracted revolt that cost the US dearly in terms of blood, treasure and international credibility. That’s why he’s settled on the present strategy which he thinks is a smarter way to achieve the same objectives. In other words, the goals haven’t changed. The only difference is the methods.  Here’s more from O’Hanlon:

“The plan would be directed not only against ISIL but in part against Assad as well. In a bow to reality, however, it would not explicitly seek to overthrow him, so much as deny him control of territory that he might still aspire to govern again. The autonomous zones would be liberated with the clear understanding that there was no going back to rule by Assad or a successor. In any case, Assad would not be a military target under this concept, but areas he currently controls (and cruelly bombs) would be. And if Assad delayed too long in accepting a deal for exile, he could inevitably face direct dangers to his rule and even his person.”

What does this mean?

It means that Syria is going to be the testing ground for O’Hanlon’s new regime change strategy, a strategy in which Assad is going to be the number one guinea pig.  And just so there isn’t any misunderstanding about the real aim of the operation, O’ Hanlon makes this rather stunning admission:

“This plan would differ from current strategy in three main ways. First, the idea would be plainly stated as the avowed goal of the United States….. It would also help dispel the lurking suspicion that Washington was content to tolerate the Assad government now as the lesser of two evils.”

So the administration should abandon the pretense that the US is conducting a war on ISIS and just admit openly that ‘Assad’s got to go.’  According to O’ Hanlon that would help to smooth things over with other members of coalition who are confused about Washington’s real intentions.  Here’s more from O’ Hanlon:

“…multilateral support teams, grounded in special forces detachments and air-defense capabilities as needed, would be prepared for deployment into parts of Syria once opposition elements were able to seize and reliably hold strong points…..This last part would of course be the most challenging, and the actual deployment of any such teams the most fraught. It need not be rushed….But it’s a necessary part of the effort.” (“Deconstructing Syria: A new strategy for America’s most hopeless war”, Michael E. O’Hanlon, Brookings Institute)

Translation: There’s going to be US boots on the ground in Syria. You can bet on it. While it’s okay to deploy the jihadi cannon fodder to lead the charge and “soften up” the enemy; eventually, you have to send in the A Team to seal the deal. That means special forces,  a countrywide no-fly zone, forward operating bases, and a ginned-up propaganda campaign aimed at convincing the sheeple that Syria must be destroyed in order to defend US national security.  All of this will unfold in Phase 2 of the Syria war fiasco which is about to intensify by many orders of magnitude.

“This type of plan may be the only realistic path forward… Moreover, while it is not without risks for the United States, the scale of military involvement envisioned is not substantially greater than what we have been doing the last year or so in Afghanistan. President Obama…. should not view Syria as a problem to hand to his successor, but rather a crisis that demands his attention and a new strategy now.”

So there you have it; the plan to rip Syria to shreds, precipitate an even bigger humanitarian crisis, and topple Assad without physically removing him from office.  All that carnage and destruction in one-short 1,100 word essay.  How’s that for brevity?

Do you ever wonder if these policy brainiacs, like O’ Hanlon, ever think about the suffering they cause with their grand strategies, or does it even matter to them? 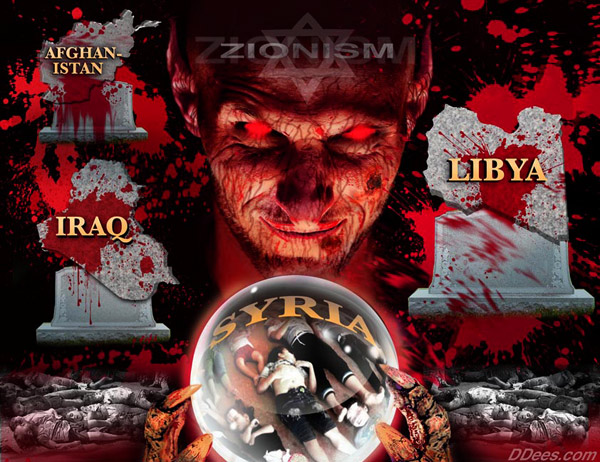 1 thought on “The Brookings Institute Plan to Liquidate Syria”