“So really, it is American taxpayers who are directly murdering Palestinian women and children and babies to the tune of sending israel $10 MILLION EVERYDAY.” 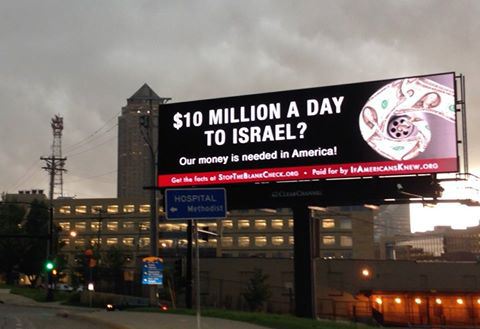 The political season in Iowa is heating up with two controversial billboards in Des Moines displaying a message critical of the relationship between Israel and the United States.

Passersby can see the image of $100 dollar bills swirling down a drain accompanied by the following bulletin: “$10 Million A Day To Israel? Our Money is Needed in America!” on digital billboards on Fleur Drive and Ingersoll Avenue.

The billboards are sponsored by If Americans Knew, a non-profit group that describes itself as “an organization dedicated to educating Americans about the Israel-Palestine conflict.” It was founded by the group’s executive director Alison Weir, an American journalist who has given presentations and lectures about the Israel-Palestine conflict at universities across the country.

The group cites a report published by the Congressional Research Service on June 10, 2015, which states that “Israel is the largest cumulative recipient of U.S. foreign assistance since World War II. To date, the United States has provided Israel $124.3 billion (current, or non-inflation-adjusted, dollars) in bilateral assistance.”

According to an email from the team at If Americans Knew, “Our government funds Israel’s military and blocks Palestinian attempts at self-determination, perpetuating injustice, violence and tragedy in the region and stirring up more resentment against the United States and Americans.

“It is our belief that if the electorate is aware of our role in this conflict, they will demand that candidates and officials in Congress stop our blank check to Israel. This is imperative if there is to be true peace in the region.”

The group initially tried to run the billboards in March with an alternative caption that read “$10 million a day to Israel just doesn’t make sense!” They were told by media advertising company Clear Channel, who owns the billboard space, that the company considered the message to be “anti-Jewish” and would not run them until the wording of the bulletin was changed.

Clear Channel was contacted by Iowa Free Press but have not been available for comment.

The billboards are part of a nationwide campaign being led by the organization. Des Moines was selected for billboard placement because “it is such a crucial location in terms of electoral politics,” according to a statement issued to Iowa Free Press.

The billboards are expected to be displayed for three weeks.