Over the weekend, we got what was merely the latest confirmation that when it comes to sliding gold prices, consumer of physical gold just can’t get enough. As the Times of India reported over the weekend, India’s gold imports shot up by about 61 per cent to 155 tonnes in the first two months of the current fiscal “due to weak prices globally and the easing of restrictions by the Reserve Bank. In April-May of the last fiscal, gold imports had aggregated about 96 tonnes, an official said.”

This follows confirmations previously that with the price of gold sliding, physical demand has been through the roof, case in point: “US Mint Sells Most Physical Gold In Two Years On Same Day Gold Price Hits Five Year Low“, “Gold Bullion Demand Surges – Perth Mint and U.S. Mint Cannot Meet Demand“, “Gold Tumbles Despite UK Mint Seeing Europeans Rush To Buy Bullion” and so on. Indicatively, as of Friday, the US Mint had sold 170,000 ounces of gold bullion in July: the fifth highest on record, and we expect today’s month-end update to push that number even higher. 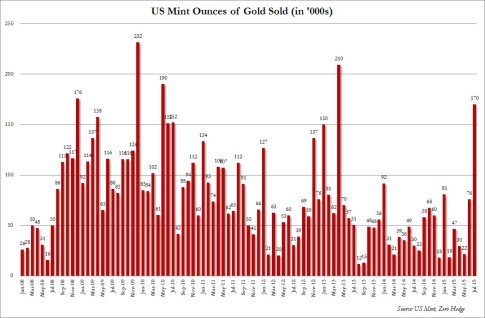 But while the dislocation between demand for physical and the price of paper gold has been extensively discussed here over the years, most recently in “Gold And The Silver Stand-Off: Is The Selling Of Paper Gold And Silver Finally Ending?”, something unexpected happened at the CME on Friday afternoon which may be the most important observation yet.

Recall that in the middle of 2013, in an extensive series of articles, we covered what was then a complete collapse in Comex vaulted holding of registered (i.e., deliverable) gold.  At the time the culprit was JPM, where for some still unexplained reason, the gold held in the newest Comex’ vault plunged by nearly 2 million ounces in just six short months.

More importantly, the collapse in registered Comex gold sent the gold coverage ratio (the number of ounces of “paper” gold open interest to the ounces of “physical” registered gold) soaring from under 20 where, or roughly in line with its long-term average, to a whopping 112x. This means that there were a total of 112 ounces of claims for every ounces of physical gold that could be delivered at any given moment.

Gradually, the Comex raid was relegated to the backburner when starting in 2014 the amount of registered gold tripled from the upper 300k range to 1.15 million ounces one year ago, at which point the slide in Comex registered gold started anew.

Which brings us to Friday afternoon, also known as month end position squaring, when in the latest daily Comex gold vault depository update we found that while some 270K in Eligible gold had been withdrawn mostly from JPM vaults, what caught our attention was the 25,386 ounces of Registered gold that had been “adjusted” out of registered and into eligible. As a reminder, eligible gold is “gold” that can not be used to satisfy inbound delivery requests without it being converted back to registered gold first, which makes it mostly inert for delivery satisfaction purposes. 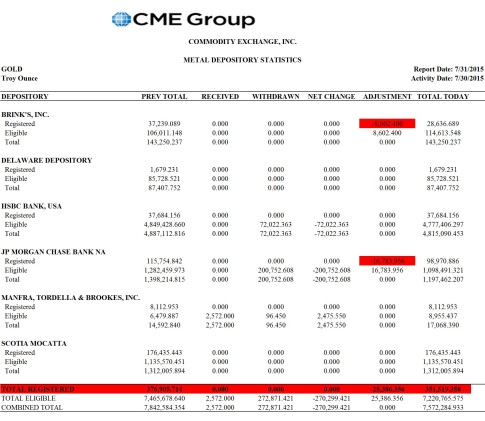 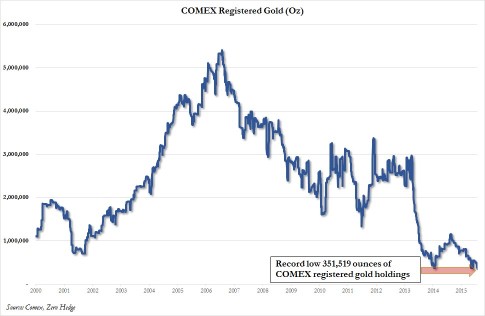 Incidentally, as part of the month-end redemption requests, we saw a whopping 22% of the eligible gold in Kilo-bar format (where there is no registered, just eligible) be quietly whisked away from Brink’s vaults: unlike traditional ounce-based contracts, the kilo format traditionally serves as an indication of Chinese demand, and if withdrawals on par with those seen on July 31 persist, it will soon become clear that Chinese buyers are once again scrambling for the safety of gold now that their stock market bubble has blown up. 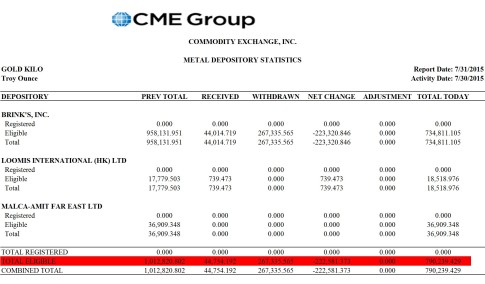 This covers the sudden surge in demand for physical gold as manifested by CME data.

Meanwhile, over in “paper gold” land, things remained unchanged: as shown in the chart below, the aggregate gold open interest rose modestly to 43.5 million ounces up from 42.9 million the day before. 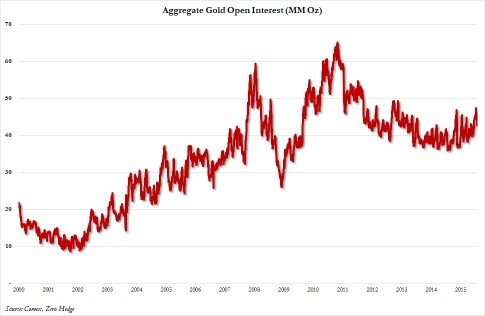 While on its own, gold open interest – which merely represents the total potential claims on gold if exercised – is hardly exciting, as we have shown previously it has to be observed in conjunction with the physical gold that “backs” such potential delivery requests, also known as the “coverage ratio” of deliverable gold.

It is here that things get a little out of hand, because as the chart below shows, all else equal, the 43.5 million ounces of gold open interest and the record low 351,519 ounces of registered gold imply that as of Friday’s close there was a whopping 123.8 ounces in potential paper claims to every ounces of physical gold.

This is an all time record high, and surpasses the previous period record seen in January 2014 following the JPM gold vault liquidation. 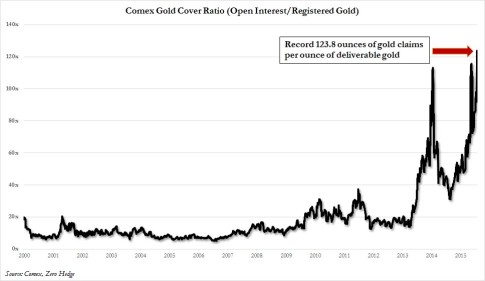 Another way of stating this unprecedented ratio is that the dilution ratio between physical gold and paper gold has hit a record low 0.8%.

Indicatively, the average paper-to-physical coverage ratio since January 1, 2000 is a “modest” 19.1x. As of Friday it had soared to more than 6 times greater.

Which brings us to the usual concluding observations:

First: as we have said previously, at a time when all the gold selling (and naked shorting) is in the paper markets and when demand for physical gold is once again off the charts, with soaring purchases not only in India but also in the US, where is this gold going? Clearly not into CME gold vaults, which are once again a source of physical gold, and as the above shows, have never had less deliverable gold.

Second, total Comex gold has dropped to such precarious levels in the past and while on many occasions market observers have asked if the Comex is close to a failure to deliver, aka a default of the CME’s gold warehouse, it has always avoided such a fate. Still, one wonders: the 10+ tons of deliverable gold at the Comex are now worth a paltry $383 million. It would not be very complicated for a next generation “Hunt Brother” to buy some $400 million in Comex gold, and promptly demand delivery: after all the gold crash of two weeks ago saw some $2.7 billion in paper gold dumped in the most illiquid market – why can’t it be done in reverse. What would happen next is unknown, but unless somehow the Comex found a way of converting millions of ounces of Eligible gold into Registered, the CME would simply be unable to satisfy such a delivery request.

Third: while there are still over 7 million ounces of Eligible gold, why the recent spike in “adjustments” of eligible to registered gold (i.e., missing a warehouse receipt)?

Finally, we assume the mainstream press will once again start paying close attention to the total, and especially registered, gold held at the Comex: at a pace of 25K a day, the gold vaults that make up the CME’s vaulting system would be depleted in just under two weeks of daily withdrawals.

In any case, we are very curious to see how this latest dramatic face off in the long-running war between paper and physical gold, concludes.

1 thought on “Comex On The Edge? There Are Now A Record 124 Ounces Of Paper Gold For Every Ounce Of Physical”