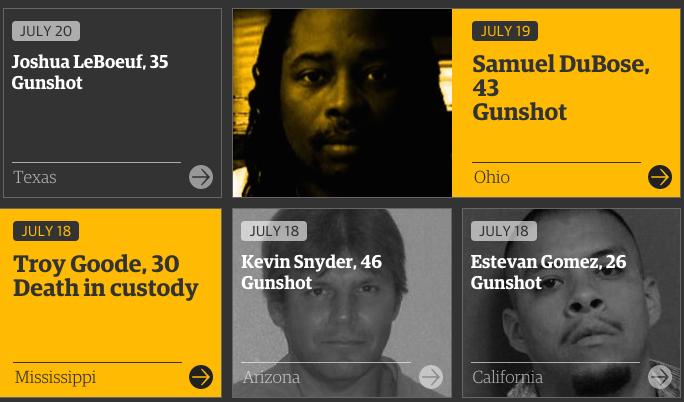 Early last month in “Crowdsourcing Police Brutality“, we highlighted an ongoing project at The Guardian which is attempting to tally the number of people killed by police in the US during 2015. Use of deadly force by authorities in America has become a hot button issue after several high profile cases involving the death of unarmed black suspects culminated in a night of violent protests in Baltimore.

In the wake of Baltimore’s “purge” (as April’s protests came to be known), two competing theories emerged about what effect the controversy has had on policing in America. We’ve outlined the two theories on a number of occasions, but for those unfamiliar, here’s a recap:

One theory — dubbed the “Ferguson Effect” — claims police are now reluctant to engage in “discretionary enforcement” for fear of prosecution. “Discretionary enforcement” of course refers to the use of lethal force in the line of duty and the implication seems to be that in light of recent events, law enforcement officers are afraid that their actions will be scrutinized by the public. In extreme cases, such scrutiny could culminate in social unrest, something no one individual wishes to be blamed for.

Casting doubt on the so-called Ferguson Effect is a report from The Washington Post which shows that US police are shooting and killing “suspects” at twice the rate seen in the past. More specifically, 385 people have been killed by police in 2015 alone. Unsurprisingly, minority groups are overrepresented in cases involving the fatal shooting of unarmed suspects.

Despite a notable spike in violence across Baltimore in the months since the riots and the persistence of violent crime in Chicago, the number of people killed by police across the country posted M/M declines in April, May, and June. In July, the trend was broken. Here’s The Guardian with more:

July was the deadliest month of 2015 so far for killings by police after registering 118 fatalities, according to the Guardian’s ongoing investigation The Counted, which now projects that US law enforcement is on course to kill more than 1,150 people this year.

The July figure brought an end to a steady decline in totals over the previous four months. After 113 people were killed in March, 101 died in April, 87 fatalities were recorded in May and 78 in June.

At least 20 people killed in July – more than one in six – were unarmed, including Samuel DuBose, who was shot by University of Cincinnati officer Ray Tensing in a 19 July traffic stop that has become the latest flashpoint in protests over the police’s use of deadly force.

Of the 118 people, 106 died from gunfire, making July also the first month of 2015 in which that number has exceeded 100. Two people died after officers shocked them with Tasers, two died being struck by police vehicles, and eight died after altercations in police custody.

Tensing had claimed DuBose dragged him with his car, but footage recorded by Tensing’s body camera refuted his account. The officer was charged with murder on Wednesday, when at a press conference the Cincinnati prosecutor Joe Deters called the shooting “senseless” and said Tensing “should never have been a police officer”.

Tensing, who turned himself in on Wednesday, was arraigned on Thursday and has been released on bail. On Friday it was announced by Deters’s office that two officers who appeared to reinforce Tensing’s false account will not be charged with any crimes.

For those who haven’t seen the body cam footage referenced above, here is the incident:

As a reminder, The Guardian’s effort stems from what it says is a generalized failure on the part of the US government to keep a “comprehensive record of the number of people killed by law enforcement” which it says is a “prerequisite for an informed public discussion about the use of force by police.”

Again, we’ll leave it to readers to determine what it says about police accountability in America when other countries feel compelled to put a face and a name to hundreds of people whose deaths, if left in the hands of the US government, might have gone unnoticed or worse, undocumented.