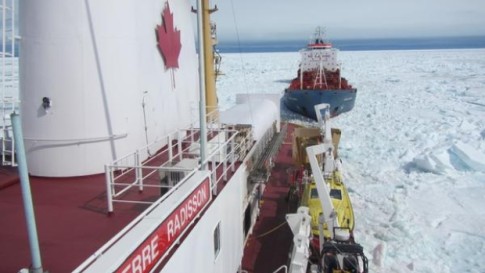 Holding up resupply of Iqaluit

21 Jul 2015 – Heavy ice in the Arctic is making it difficult, if not impossible, for ships to deliver the annual resupply of fuel and goods to some Nunavut and Nunavik communities, says CBC News.

Midway through July, only a single oil tanker, aided by the Coast Guard icebreaker CCGS Pierre Radisson, has been able to reach Iqaluit though the sea ice that remains in Frobisher Bay.

And even though the tanker has finally reached the city, it has still been unable to unload.

“[The ship] cannot get to a secure anchorage to put its line out to fuel the community,” said Johnny Leclair, the Coast Guard’s assistant commissioner.

Contrary to predictions made earlier this year, the sea ice in the bay has not been melting, said Leclair.

Instead, a large compacted pan of thick, first-year and multi-year ice has formed in the bay, ice so thick that icebreakers and commercial ships alike have no choice but to skirt around it.

“We haven’t seen these ice conditions in the eastern part of Hudson Bay this late in the season in, I’d say, two decades,” Leclair said.

“There is a large patch of ice that has not melted and is creating problems for shipping.”