Earlier this week, in an FT op-ed, Eurointelligence’s Wolfgang Münchau said that in his estimation, an EMU exit remains the most likely outcome for Greece. The reason, Münchau explained, is that “[Greek PM Alexis] Tsipras ended up with another very lousy bailout deal. And this one suffers from the same fundamental flaws as its predecessors.” Münchau went on to describe, in vivid detail, how he believes a Grexit would unfold:

My own most likely Grexit scenario is a different one yet again. Donald Tusk, the president of the European Council, hinted at this in his interview with the Financial Times last week when he said that he felt “something revolutionary” in the air. He is on to something. The most probable scenario for me is Grexit through insurrection.

Whether he knew it when he penned those words or not, Münchau’s vision for Greece nearly unfolded just over a week ago when, according to FT, Syriza’s Left Platform (led by outspoken former Energy Minister Panayotis Lafazanis) met in at the Oscar hotel in a “shabby” downtown district of Athens and plotted to ransack the Greek mint, seize the country’s currency reserves, and arrest central bank chief Yannis Stournaras.

It’s not entirely clear from the piece what the conspirators – who FT makes sure to mention included “supporters of the late Venezuelan president Hugo Chávez” and “old-fashioned communists” – planned to do next, but it certainly seems likely that if what you’re about to read is true, Greece came dangerously close to civil war last Wednesday.

Arresting the central bank’s governor. Emptying its vaults. Appealing to Moscow for help.

These were the elements of a covert plan to return Greece to the drachma hatched by members of the Left Platform faction of Greece’s governing Syriza party.

They were discussed at a July 14 meeting at the Oscar Hotel in a shabby downtown district of Athens following an EU summit that saw Greece cave to its creditors, leaving many in the party feeling despondent and desperate.

The plans have come to light through interviews with participants in the meeting as well as senior Greek officials and sympathetic journalists who were waiting outside the gathering and briefed on the talks.

“Obviously it was a moment of high tension,” a Syriza activist said, describing the atmosphere as the meeting opened. “But you were also aware of a real revolutionary spirit in the room.”

Yet even hardline communists were taken aback when Mr Lafazanis proposed that the Syriza government should seize control of the Nomismatokopeion, the Greek mint, where the bulk of the country’s cash reserves are kept.

“Our plan is that we go for a national currency. This is what we should have done already. But we can do it now,” he said, according to people present at the meeting.

Mr Lafazanis said the reserves, which he claimed amounted to €22bn, would pay for pensions and public sector wages and also keep Greece supplied with food and fuel while preparations were made for launching a new drachma.

Meanwhile, the central bank would immediately lose its independence and be placed under government control. Its governor, Yannis Stournaras, would be arrested if, as expected, he opposed the move.

As the details of the Left Platform meeting have leaked out, some political opponents are demanding an accounting.

“Members of this government planned a trip to hell for Greeks,” said Stavros Theodorakis, leader of the pro-EU To Potami party. “They planned to raid the vaults of the people and invade the mint as if it were a Playmobil game. Alexis Tsipras must tell us the truth about what happened.”

While the plan might have seemed straightforward enough on paper, and likely sounded like a good idea in the heat of the moment (assuming the meeting happened when FT says it did, Tsipras had betrayed the referendum outcome and agreed to hand over the country’s sovereignty to Berlin less than 48 hours earlier), it turns out that simply seizing the physical bank notes in the vault and firing up Greece’s euro printing presses wasn’t actually a viable option. “Anyone who tried to buy something with [those euros] would be at risk of being arrested for forgery,” one unnamed ECB official told FT, rather flatly.

Recall that just days before Tsipras arrived in Brussels for his “mental waterboarding”, Lafazanis had enthusiastically laid out the plans for Greece’s partnership with Russia on Gazprom’s Turkish Stream pipeline, exclaiming in the process that “Greece is no one’s hostage” and that “the Greek people’s No vote is not going to become a humiliating Yes.” 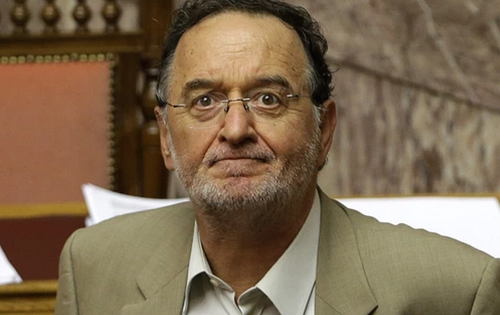 Lafazanis, FT notes, “visited Moscow three times as Mr Tsipras’s envoy after Syriza came to power in January. In return for signing up to a new gas pipeline project, he hoped for at least €5bn in prepayments of gas transit fees, according to people briefed on the initiative. But the Russians rejected the deal the week before the EU summit.” Some reports have also suggested that Moscow backed out of a deal to provide Athens with a loan to launch the new drachma.

We’ll leave it to readers to digest the above and determine how close the Greek mint was to being commandeered by bloodthirsty (politically speaking that is) communists, but it’s worth noting that according to one bank official who spoke to FT, “it was all a fantasy.”