In the immediate aftermath of Sunday night’s massive gold slam, which was oddly reminiscent of the great silver crash of 2011 when on May 1 just around 6:25pm, silver plunged by 15%, from $48 to $42 with no news or catalyst… 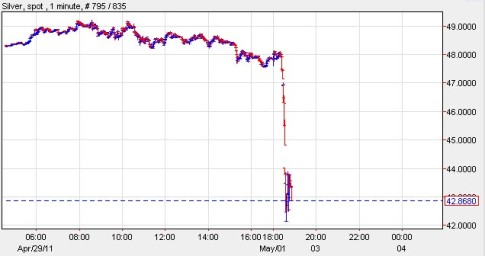 … marking the all time high price of silver in the current precious metals cycle (that particular ‘malicious seller’ has never been identified) the promptly arranged narrative was that because the gold crash took place in the span of 30 seconds just before Chinese stocks opened and broke the gold futures market not once but twice, that it has to be a China-based seller with Reuters taking the lead and quickly pointing the finger with an article titled “Gold hits five-year low, under $1,100 on Chinese selling.” 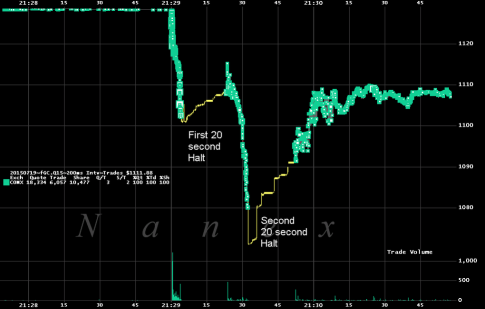 Ironically, the very same Reuters last night admitted that it had been wrong and that it was in fact: “New York sell orders in thin trade” that triggered the “Shanghai gold rout”:

In early Asian trading hours on Monday, when typically only tens of contracts of gold are traded, investors dumped more than $500 million worth of bullion in New York in four seconds, triggering the market’s biggest rout in years.

The sell-off began when one or more massive sell orders hit the price of gold on the CME Group’s Comex futures in New York a tenth of a second after 9:29 a.m. in Shanghai, triggering turnover of almost 5,000 lots of gold in a blink of an eye. That equates to 13 tonnes of gold, more than typically trades in hours during this time of day, and the selling knocked the price almost $20 to $1,100 per ounce during those four seconds. It marked the first leg of a dramatic 60-second sell-off that saw prices sink more than 4 percent to five-year lows.

And just like that the narrative shifts again: instead of a Chinese seller, the real culprit appears to have been a US-based entity masking as a Chinese trader, around which the media then conveniently built a further goal-seeked “story” in which the Sunday night selling (by a US entity now) was the result of a PBOC announcement that its gold holdings had risen to “only” 1600 tons… however the problem is that all this had been known since Friday morning.

So, fast forward to this morning when in yet another Reuters piece, we “find” that the narrative has shifted once more and that now, “traders from Hong Kong to New York are pointing the finger at others for being behind the move while struggling to unmask the mystery sellers.”

In other words: the “hunt” for the great gold “bear raid leader” has begun.

Singapore-based futures brokerage Phillip Futures declared “indiscriminate selling by Asian hedge funds at the stroke of the market’s open in Shanghai” as the chief cause of the price fall in a letter to clients.

But the most well known Chinese funds denied involvement, and as futures trading is anonymous, dealers may never know who was buying and selling during those crucial seconds.

Such details often only become available if regulators take action, and amid the regulatory scrutiny following China’s recent equity market tumbles, it’s unlikely any trader or fund will be eager to take credit for setting off another avalanche.

The fact that the selloff occurred while Japan’s markets were closed for a holiday and U.S. and European traders remained on weekend leave served to implicate China-based dealers in the eyes of some market participants.

At this point a Reuters source even dared to use the “M” word:

“That move was aggressive manipulation. Somebody clearly wanted the market lower and timed it very well,” said a gold trader at a bank in Hong Kong, who saw parallels with the way funds have been linked to swings in copper.

Of course it was, but instead of focusing on what truly matters let’s go chasing for red, literally, herrings…

Chinese funds such as Shanghai Chaos Investment Co and Zhejiang Dunhe Investment Co were, according to traders, behind falls in copper, one in March last year when the metal fell more than 8 percent in three days, and again in January this year when copper slid almost 8 percent in two days.

… herrings which however had nothing to do with the actual selling:

Sources familiar with both Zhejiang Dunhe and Chaos, and at similar outfits, say that while China’s status as the dominant copper consumer left that market vulnerable to potential influence, China’s traders have no such sway over bullion.

“Honestly, Chinese hedge funds are not as experienced as the overseas veterans and gold is more connected to U.S. dollar movement and well-dominated by Wall Street,” said a trader with a Shanghai hedge fund.

A London-based trader with an investment bank agreed the lead seller might not be from Asia. “The selling was on Comex and could also be a non-Chinese fund just executing in what they thought was an illiquid timezone to get the biggest move,” the trader said.

Others got close to admitting what happened, but were stopped just short, instead falling back to what had already been set up as the false narrative:

Vishnu Varathan, senior economist at Mizuho Bank, added “there’s a good real money presence in centres like Hong Kong and Singapore. But of course, the inside people who knew where the trades were executed probably have their reason for citing Chinese hedge funds, but I don’t think they were alone in this trade.”

“I think one of the triggers was some disappointment with the amount of the buildup in China’s gold reserves so in terms of the proximity of that particular trigger and the markets that were open there was some involvement, I’m sure, but it may not be the full story,” Varathan said.

For the record, here is what we said moments after the “bear raid” took place:

Once again, as in February 2014 and on various prior cases, the fact that someone meant to take out the entire bid stack reveals that this was not a normal order and price discovery was the last thing on the seller’s mind, but an intentional HFT-induced slam with one purpose: force the sell stops.

So what caused it?

The answer is probably irrelevant: it could be another HFT-orchestrated smash a la February 2014, or it could be the BIS’ gold and FX trading desk under Benoit Gilson, or it could be just a massive Chinese commodity financing deal unwind as we schematically showed last March it could be simply Citigroup, which as we showed earlier this month has now captured the precious metals market via derivatives.

We then added: “we won’t know for sure until the CME once again explains who violated exchange rules with last night’s massive orders.”

This is the same CME which took 18 months to admit that the almost identical market halting gold flash crash from January 6, 2014 was the result of potentially premeditated “flawed” algo trading which “resulted in a disruptive and rapid price movement in the February 2014 Gold Futures market and prompted a Velocity Logic event.”

And, anticipating precisely today’s latest development in the great gold crash story, namely the pursuit of the perpetrators we also added: “there are many who do want to know the reason for the gold crash, which just like in January 2014 had a clear algorithmic liquidation component to it. Which means that until the CME opines on precisely who and what caused the latest gold market break, we won’t know with any certainty. That doesn’t mean that some won’t try to “explain” it.'”

Such as Reuters, on several occasions.

But the real answer, which almost certainly once again points to the trading desk of one Benoit Gilson in Basel, will surely never be revealed. Even in the January 2014 case, the CME stopped short of actually identifying precisely who had oredered the gold collapse instead leaving it broad as follows: “this failure resulted in unusually large and atypical trading activity by several of the Firm’s customers.”

Which ones? Or perhaps the $64,000 answer to that question is what the central banks and the BIS, and hence the CME, will guard at all costs.

Finally, as we also noted previously, “while the actual selling reason was irrelevant, the target was clear: to breach the $1080 gold price which also happens to be the multi-decade channel support level.”

So far this has almost succeeded, with gold repeatedly sliding just shy of $1080 but never actually breaching it. We expect this too support level to be taken out as what is now clear and accepted manipulation continues, which in retrospect, will merely afford those who buy gold for its true practical value, as insurance against a systemic collapse which is pretty close to where the Chinese central planners find themselves right now not to mention the imploding European monetary union, to buy more for the same paper price.

As for the “great”, and greatly misdirecting, hunt for the “bear raid” leader, one which will never reveal the true culprit, bring it on – we can always do with some entertainment meant to distract the masses. In fact, we would not be at all surprised if some Indian trader out of his parent’s basement in a London suburb ends up going to prison for this while those guilty of chronic, constant manipulation continue to walk free… 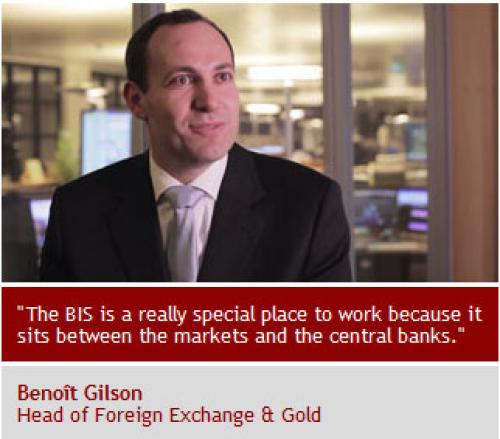