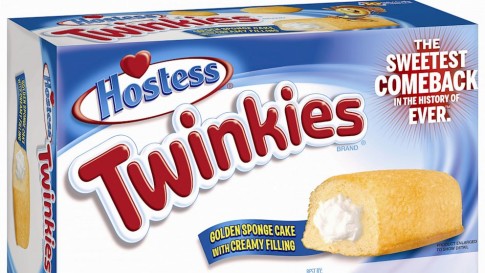 Two days ago we reported that according to the new Chief Restructuring Officer of America’s “first national supermarket chain”, Great Atlantic & Pacific, also known as A&P, Superfresh and Pathmark supermarkets, which just filed its second chapter 11 bankruptcy protection in 5 years, it did so for one main reason: unions, and specifically legacy Collective Bargaining Agreements which made profitability for the (heavily levered) company impossible.

While that argument is debatable, and as we said “if it wasn’t for unions, it would be something else, like loading up on massive amounts of debt to repay Yucaipa’s equity investment, which would then be unsustainable once rates rose and once interest expense became so high it soaked up all the company’s cash flow” one thing that is absolutely certain is that what A&P just did is a flashback to what Twinkies’ maker Hostess itself did as part of its November 2012 Chapter 7 bankruptcy liquidation.

Then, too, the company sought to crush labor unions who “refused to negotiate in good faith”, and as a result the company went bankrupt, thereby ending all of its legacy labor agreements once and for all.

Sure enough, freed of its cash-draining labor obligations, Hostess suddenly became a very attractive target and not only did it survive but it flourished when in 2013 Private Equity titan Apollo Global Management and billionaire investor C. Dean Metropoulos acquired the maker of Twinkies from liquidation.

Very shortly thereafter, the equity investors did everything they could to reward themselves for an investment in the newly labor union-free company, which was quite viable as a standalone entity because demand for its products was as high as ever (the US will never have a problem with lack of obesity) and tried first to sell the company and then to take it public. They were unable do achieve either, so they decided to take a third route, one which takes advantage of the unprecedented debt bubble.

As Bloomberg reports, “Hostess is selling $1.23 billion of term loans. Of that, $905 million will be used to pay a dividend to its shareholders, according to Standard & Poor’s. That’s more than double what they paid for the business.”

Translated: after investing $410 million in March 2013, two billionaires are about to make a $500 million return an investment they have held just over two years, with the blessing of a whole lot of debt investors. And all they had to do was pick up the carcass of a company which did nothing more than crush its unions.

Somewhat snydely, we hope, Bloomberg adds that “the deal is just the latest example of how record-low borrowing costs from the Federal Reserve are encouraging risky companies to add cheap debt — sometimes to enrich private-equity firms — as investors clamor for yield.”

Not sometimes: every time there is a bond bubble resulting from years of ruinous monetary policy and cheap rates, it is the equity backers who are left with all the profits. In this case, Apollo and Metropolous will make a more than 100% return over a holding period of less than two years.

They are not alone: “So-called dividend deals reached almost $16 billion in the second quarter, the most in a year, according to Bloomberg data. The downside of the loans is they can increase a borrower’s risk of default by piling on debt, without any of the cash going to improving operations or boosting revenues.”

“Dividends aren’t designed to create value for the company,” Moody’s Investors Service analyst Brian Weddington said by phone. “This is a return of capital and profits to the founding investors.”

No, the value for the company, its equity sponsors will claim, came from their involvement, and indeed company operations did pick up modestly:

Business at Hostess has improved since the buyout. Earnings have increased “substantially,” said S&P’s Chiem. Revenue has risen to more than $600 million, and earnings before interest, taxes, depreciation and amortization to nearly $200 million, according to S&P. The snack business was able to cut costs by storing its products in a warehouse rather than delivering them directly to stores from where they’re made, according to Chiem.

Happy with their achievement, which was only made possible as a result of the unbundling of the underlying business from its labor union ties, barely one year after their involvement, the billionaire owners sought to capitalize on their investment and Hostess began considering a sale last year, with sources saying in November that the business could fetch as much as $1.6 billion.

The sale process went nowhere, as did a subsequent attempt to take Hostess public.

So, why not follow the path of least resistance, and present credit investors using “other people’s money” with the chance to repay them. This is precisely what they did about to happen courtesy of Credit Suisse which is the lead underwriter on the new debt financing.

Credit Suisse is leading the financing, which consists of an $825 million first-lien loan and a $400 million second-lien offering, according to data compiled by Bloomberg. It has asked investors to commit by July 30.

But don’t say the new creditors, secured by a whole lot of Twinkies and Ho-Hos in company inventory, did not put up a fight demanding fair terms: “At a July 16 meeting held at Credit Suisse Group AG’s New York offices, potential investors were offered treats including Hostess orange cupcakes, according to three people with knowledge of the meeting. They were also offered an interest rate of as high as 7.75 percentage points” above LIBOR.

End result: a company that went from 2x EBITDA leverage to an eye-popping 6x!

For Hostess, the deal will triple debt levels to about six times a measure of earnings, according to an S&P report this month. Regulators including the Federal Reserve and the Office of the Comptroller of the Currency said in their 2013 leveraged lending guidance that debt levels exceeding six times raise concern as they seek to curb risky underwriting.

The irony is that Apollo would have pulled out even more cash if there wasn’t a leverage cap. Still, even with “only” 6 turns of EBITDA in debt, most know how this deal will end:

The dividend demonstrates “a very aggressive financial policy,” S&P analyst Bea Chiem said in the report. The credit grader is keeping Hostess’s corporate rating at B, or five levels below investment-grade, on the view that the baker’s operating performance will continue improving. The junior-ranked loan being marketed is rated CCC+, or seven levels below investment grade.

Only this time there will be no unions left to blame: it will be all about the insurmountable leverage, and the rapacious greed of its PE sponsors to strip the company of all pledgeable assets and extract as much cash as possible in the shortest possible time, while layering what the IMF would clearly dub is insurmountable debt.

But before you blame them, blame the creditors who made it possible: all those “investors” who were tempted with “Hostess orange cupcakes” to dump billions of other people’s money entrusted to then, just so they could generate a modest return.

And before you blame these individuals who are merely looking after their year-end bonus which is contingent on beating some risk (or rather return)-free benchmark, blame the Fed whose 7 years of ZIRP has made this kind of asset strip-mining not only possible but an acceptable, daily occurrence.

Because the end result is clear: after the unions were crushed, and Hostess emerged with a clean balance sheet, the fact that it already has 6x debt guarantees it will be bankrupt once again. The only question is when.

The losers will be the thousands of non-unionized full and part-time workers at the company.

The only winners: the billionaire investors who are about to get even richer thanks to none other than the Federal Reserve and an entire world filled with lunatic central bankers who have clearly taken over the asylum.