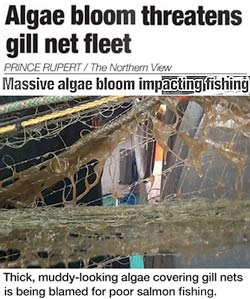 – TV: Mystery ‘green goo’ decimating fishing on West Coast — “Like ectoplasm in Ghostbusters” — Experts: “About as severe as we could ever anticipate… Lot of unusual things going on” — “We’re not catching any fish… Never as bad as right now… Almost non-existent… Worst season ever” (PHOTO) (ENENews, July 21, 2015):

Business in Vancouver (weekly newspaper), Jul 20, 2015 (emphasis added): When north coast fishermen set their nets on June 9 [they] pulled up thick blankets of slime… Department of Fisheries and Oceans (DFO) has determined the slime to be a “goo” of phytoplankton… To make matters worse, as of mid-July, Skeena River sockeye – with a predicted run size of 3.5 million – were a no-show… as of mid-July, only 130,000 had returned… “As far as sockeye salmon… this is about as severe as we could ever anticipate,” said University of BC biologist Tony Farrell… warm water is believed to be changing the food web… Initial numbers show a much lower than expected sockeye run for both the Nass and Skeena rivers in northern B.C. The problem is most pronounced on Vancouver Island… Fishing bans have been implemented on several Vancouver Island rivers to protect trout, steelhead and salmon stocks. Closures in other parts of B.C. are also being implemented…

The Northern View (Prince Rupert, BC, Canada), Jul 15, 2015: Algae boom threatens gill net fleet… A sticky, thick algae is being singled out as the reason for extremely dismal salmon catches…[a fisherman] describes the substance as abnormally thick, yet invisible from a boat.

Claude McDonald, fisherman with over 60 years experience, Jul 15, 2015: “We’re not catching any fish… Algae bloom has been bad before but never as bad as it is right now… you would just move to a different spot. Now there’s no other places to go, it’s just everywhere.”

Lori Wilson, Canadian Fish Corporation plant manager, Jul 15, 2015: “It’s the first time we’ve started this late since I can remember… We just haven’t had any fish.”

Ian Perry, Fisheries and Oceans Canada, Jul 15, 2015: “We’re seeing a lot of unusual things going on at the moment… a very unusual bloom of phytoplankton.”

CFTK-TV, Jul 10, 2015: Algae Bloom Decimates Salmon Fishermen Season — A rare algae phenomenon has been popping up… Local fishermen say the green stuff has made what is supposed to be one of their best salmon run seasons into their worst ever. “It’s like a green gooey stuff… It’s like ectoplasm in the Ghostbusters movie… It’s like a green goo from Mars.” Whatever it is, that green gooey stuff is causing local fishermen a lot of problems. Rick Frey has been fishing for over 50 years – and he says it’s his worst season ever. “You might as well not even be here”… Charmaine Carlson is the owner of Dolly`s Fish Market, and she says her sockeye numbers this year are almost non-existent. “I haven’t had sockeye in at all because of that. Usually I have thousands of lbs in, from my fishermen because they sell directly to me, but no nothing.” The Fishermen’s Union Rep Joy Thorkelson says it’s becoming a major problem.

CFTK-TV, Jul 14, 2015: Fishermen in Prince Rupert have expressed growing concern over a green algae material that has been… decimating their fishing season… [DFO] says they’ve collected samples, and are still monitoring it very closely.

1 thought on “TV: Mystery ‘green goo’ decimating fishing on West Coast — “Like ectoplasm in Ghostbusters” — Experts: “About as severe as we could ever anticipate… Lot of unusual things going on” — “We’re not catching any fish… Never as bad as right now… Almost non-existent… Worst season ever””