– Last Night’s Gold Slam So Furious It Halted The Market Not Once But Twice, And The Funniest “Explanation” Yet (ZeroHedge, July 20, 2015):

Yesterday, just before the Chinese market opened, precious metals but mostly gold, flash crashed in milliseconds with a violent urgency never before seen. We documented the unprecedented event last night, but for those who missed it, the following chart from Nanex clearly lays out just how sudden the “out of nowhere” selling was, which led to not one but two 20-second halts in the gold futures market spaced out precisely 30 seconds apart as a result of a Velocity Logic (or lack thereof) event. 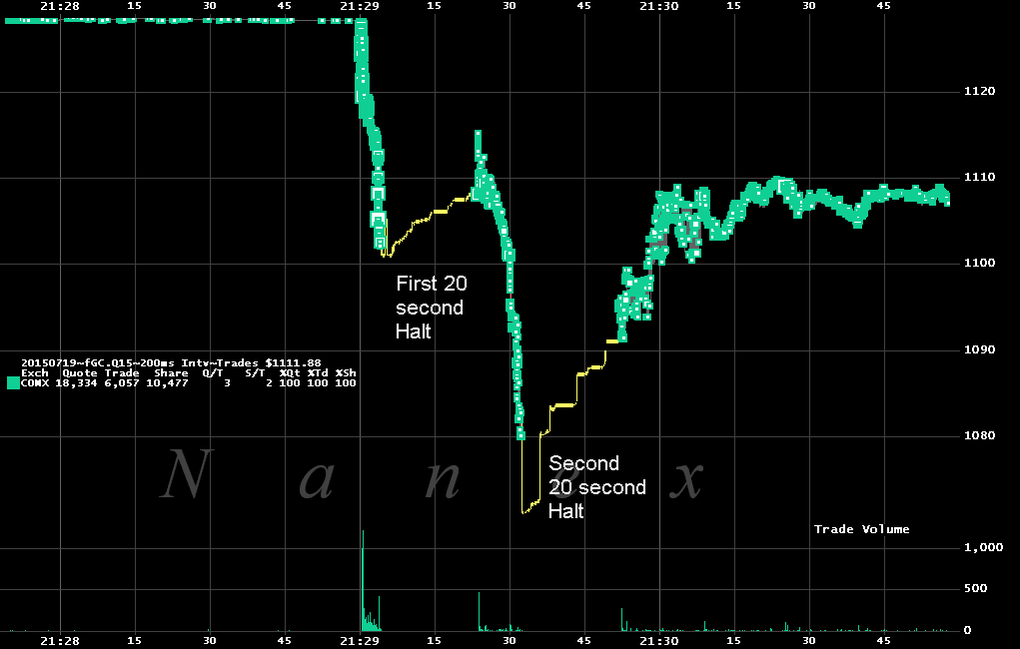 For those following the gold market, last night’s event was not surprising: after all just on this website we have documented at least three occasions when furious algorithmic gold selling broke the gold futures market for at least 10 seconds, to wit:

What was most notable about the last “velocity logic” gold slamming event is that, as we predicted in January 2014, it was due to a stray and premeditated algo. The CME confirmed just that one month ago when it charged the futures trader whose trading software broke the market and led to that particular violent crash:

The Panel found that as a result, Mirus violated Rules 432.Q. (Conduct Detrimental to the Exchange) and 432.W. (Failure to Supervise).

However, what was most critical and what the CME did not disclose was the identity of the Mirus customers whose gold selling led to “unusually large and atypical trading activity” and more importantly, what was the motivation behind a massive sell order whose only intention was to take out the entire bid stack in less than a second. Incidentally, the “penalty” was $200,000.

Also note how none of the market breaking events ever take place when there is a surge in buying of gold. Strange that…

Fast forward 18 months when we got not one but two Velocity Logic events in a row.

And now the mainstream media attention turns, as it always does in the post-mortem, to identifying who the seller was even if the same mainstream media was utterly incapable of suggesting that previous such selling events were due to HFT algos on full tilt.

For the record, we did offer some suggestions what may have caused the violent selling which was not catalyzed by any particular news of headline: “it could be another HFT-orchestrated smash a la February 2014, or it could be the BIS’ gold and FX trading desk under Benoit Gilson, or it could be just a massive Chinese commodity financing deal unwind as we schematically showed last March, or it could be simply Citigroup, which as we showed earlier this month has now captured the precious metals market via derivatives.”

Naturally, we won’t know for sure until the CME once again explains who violated exchange rules with last night’s massive orders.

As we also noted previously, while the actual selling reason was irrelevant, the target was clear: to breach the $1080 gold price which also happens to be the multi-decade channel support level. 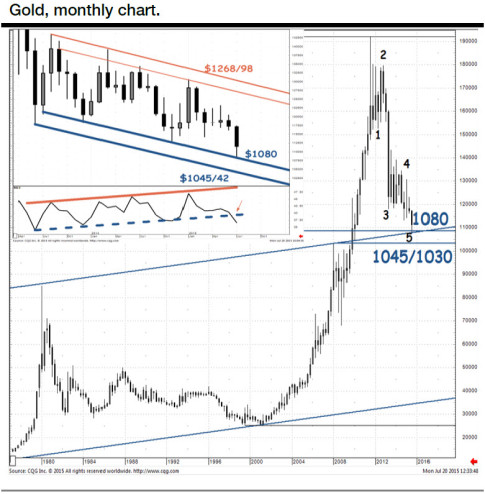 At this point it is safe to wager that this support level will be taken out in short notice (even as the PBOC continues to add physical, of which for the record it allegedly purchased over 600 tons just in June when the price of gold dropped 3%) and soon thereafter there will be a spate of defaults and frenzied merger activity among gold miners around the globe who are forced to mothball money-losing operations until no new physical gold is mined except by the most price-efficient miners.

Still, there are many who do want to know the reason for the gold crash, which just like in January 2014 had a clear algorithmic liquidation component to it. Which means that until the CME opines on precisely who and what caused the latest gold market break, we won’t know with any certainty.

That doesn’t mean that some won’t try to “explain” it.

The less amusing explanation was that the market was disappointed by the PBOC announcement that it “only” increased its gold by 57% in one month. Of course, the fact that the PBOC had been lying about its official gold holdings until May never crossed anyone’s mind because clearly it did not add 600 tons of gold in one month. Accordingly this was interpreted as bearish for the market which had been expecting far more official gold holdings, even as few assumed that if the PBOC was lying until Friday it may well continue to lie and simply park its gold with other related entities.

Furthermore, that explanation kinda, sorta forgets that the PBOC announcement took place on Friday, well before US futures markets were open, and if anyone was truly in a hurry to liquidate following the PBOC “shocker” they could have just sold either on the CME or the ICE, or even via the US-traded GLD ETF. That none of this happened confirms that PBOC had nothing to do with the underlying selling motivation.

But the funniest “explanation” we have heard yet, comes from Reuters. It is as follows:

“We do see a lot of people in China selling gold to get fast cash to go back into the equity market,” said a Singapore-based trader.

So… threatened by arrest if they sell stocks, habitual Chinese gamblers, farmers and elderly stock traders are now liquidating their gold to get “fast cash to go back into the equity market“, a market which even the most lobotomized permabulls now admit has been manipulated by China in the past month beyond anything seen in history just to preserve a clearly popping bubble.

In retrospect we don’t know what is worse: that someone actually believes this, or that this may, in fact, be true.

1 thought on “Last Night’s Gold Slam So Furious It Halted The Market Not Once But Twice, And The Funniest “Explanation” Yet”