The first time Russia’s armed forces demonstrated the Platform-M combat robot was one year ago in mid-June 2014, when in the course of military drills by the Baltic Fleet near Kaliningrad, the robotic combat platforms, armed with grenade launchers and Kalashnikov rifles saw their first action, executing their military missions alongside their live colleagues. 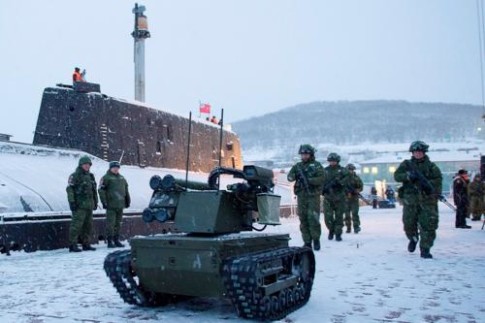 But what is the Platform-M aside from looking like a very angry, heavily armed version of Wall-E, or a predecessor of the T-1 Series terminator? As explained by RBTH, “the Platform-M is a remote controlled robotic unit on a crawler” one which resembles the protagonist of the 2008 Pixar computer animation WALL-E as well as the original T-1 terminator. 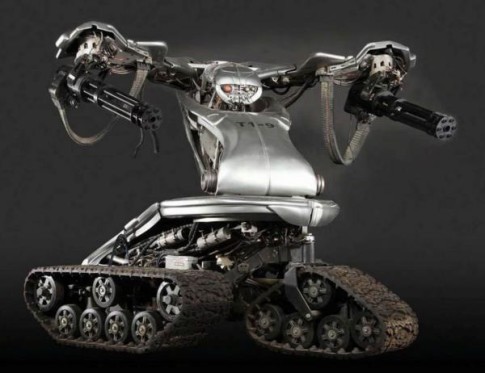 The affinity between Platform-M and the animated character can also be seen in the robot’s prototype, which appeared on the Russian internet in an animated presentation. In the video, the robotic vehicles, which resemble Platform-M (only on wheels instead of tracks), easily destroy a force of enemy militants armed with NATO weaponry.

According to some data provided by the Russian military, the Platform-M unit is supplied with “a differentiated defensive chassis and a firing platform and can carry out combative tasks during the night without unmasking instruments.”
The robot is armed with the famous Kalashnikov rifle made in Izhevsk and four grenade launchers.

At the Progress Scientific Research Technological Institute of Izhevsk, where it was made, the “crawling creation” was given the following assessment: “Platform-M is a universal combat platform. It is used for gathering intelligence, for discovering and eliminating stationary and mobile targets, for firepower support, for patrolling and for guarding important sites. The unit’s weapons can be guided, it can carry out supportive tasks and it can destroy targets in automatic or semiautomatic control systems; it is supplied with optical-electronic and radio reconnaissance locators.”

As RBTH adds, Russian robotic technology has existed since the days of the Moon rovers. Back in 1964 the Russian Air Force acquired a system of long-range pilotless photo and radio technological reconnaissance called the DBP-1. This reconnaissance machine, launched from western parts of the country, could carry out its assignments over all of Central and Western Europe.

In 1973 the Soviet Union initiated the first state scientific and technological program devoted to the creation and implementation of industrial robots. Consequently, by 1985 the USSR had 40 percent of the world’s industrial robots at its disposal, having surpassed the U.S. These units were guided by network-centric principles and artificial intelligence was embedded in the military sphere.

Still, many had believed that Russia was years behind the envelope when it comes to putting advanced robotic technology on the battlefield. Until today, when a video showcased Russia’s latest military equipment in Sevastopol, ranging from the “Bastion” air defense and anti-ship complexes missile system to sniper rifles and special ops naval guns, also showed none other than the Platform-M combat robot mingling among the population of this most important Crimean city.

Now all that is needed is for some hacker to penetrate the Platform-M firewall and take control of a small army of these units and then we can finally move the Terminator series into the non-fiction section.