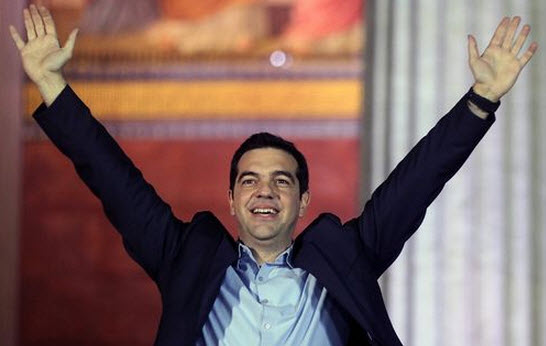 – Tsipras Says Will Be Difficult To Remain In Power As More Than Half Of Syriza Slam Deal (ZeroHedge, July 15, 2015):

Update: As noted below, Greek PM Alexis Tsipras faces a party rebellion ahead of today’s vote in parliament. According to multiple reports, more than half of Syriza lawmakers have indicated they will vote against the deal, leaving Tsipras to depend on opposition support to pass the new term sheet and throwing the future of Greek politics into question. As Bloomberg notes, the best case scenario will find Tsipras presiding over a minority government with the help of opposition parties. As for the worst case (for Tsipras anyway), here’s Reuters:

Perhaps I’m lost in translation, but seems half of Syriza (& most of Anel) voting against govt in its most imp vote…but still back govt

The complete preview of the Greek parliament vote:

On Tuesday, in “Complete Humiliation: Greek Parliament Pressed To ‘Approve’ German ‘Coup’“, we said that every lawmaker in Athens is now fully aware of the fact that what has happened to Greece is nothing short of a ruthless political coup executed by Germany.

Today, the Greek parliament is being asked to legislate away its sovereignty in exchange for a bridge loan and a third program that should allow the country to remain in the euro, stave off the complete collapse of the banking sector, and prevent the country from sliding further into depression than it already is.

That said, it’s a Faustian bargain. The trade off looks like this: “No” means a lot of pain now and recovery later; “Yes” means less pain now but no hope of recovery ever.

And although the bailout will likely go through, the divisions within Syriza betray the true extent to which Germany has managed to effect political change in Greece by keeping a tight grip on the purse strings. Indeed, some reports suggest that nearly half of the party is now calling for a “no” vote.

Greece: 107 out of 201 members of Syriza’s central committee call for No and a party conference. Won’t derail today’s vote but significant

Here’s Reuters with more color on the impending vote:

Prime Minister Alexis Tsipras battled to win lawmakers’ approval on Wednesday for a bailout deal to keep Greece in the euro, while the country’s creditors, pressed by the IMF to provide massive debt relief, struggled to agree a financial lifeline.

Having reluctantly conceded to negotiating a third bailout from international lenders on stringent terms, Tsipras must face down a rebellion in his anti-austerity Syriza party to push sweeping pro-market reforms and spending cuts through parliament.

“It’s a difficult deal, a deal for which only time will show if it is economically viable,” his finance minister, Euclid Tsakalotos, told lawmakers during a debate on reforms.

Dozens of MPs, including senior Syriza figures and the government’s junior coalition partner, may partially or fully reject the bailout, forcing Tsipras to rely on pro-European opposition lawmakers to carry the vote, which is expected after midnight.

A snap election could follow if the prime minister’s majority collapses, and in an early sign of trouble in store, the deputy finance minister abruptly submitted her resignation and the energy minister said he would not back the deal.

“The choice between a bailout or catastrophe is a choice made in the face of terror,” Panagiotis Lafazanis, who heads the far-left flank of Syriza, told reporters.

And here’s some further color from Bloomberg:

The toughest conditions ever attached to a Greek loan agreement could sail easily through Greece’s turbulent parliament when a vote is held Wednesday, even as widespread defections from Alexis Tsipras’s governing coalition threaten his government.

That’s because Greece’s main opposition political parties, conservative New Democracy, centrist To Potami and Socialist Pasok, have united in supporting the sweeping reform agenda that is a prerequisite to keeping the country in the euro.

Tsipras had already won the parliament’s nod to negotiate a deal in return for austerity measures before he left for Brussels. The government’s proposal secured an overwhelming 251 votes in Greece’s 300-seat chamber Saturday, even without the backing more than a dozen lawmakers from Tsipras’s Coalition of the Radical Left, or Syriza, party.

Greece must hold a similar vote by Wednesday to enact the first set of reforms demanded by its creditors as a sign of rebuilding trust after six months of often acrimonious talks. While more members of Tsipras’s Syriza party are threatening to defect, a look at the numbers shows that Greece may escape this time the cliffhanger of past bailout votes.

Tsipras’s coalition government commands 149 seats in parliament held by Syriza lawmakers and another 13 seats held by members of right-wing Independent Greeks, the junior coalition partner. Their combined 12-seat majority evaporated Saturday, when 17 lawmakers from Syriza refused to back Tsipras’s proposals to creditors and may be eroded further if another 15 Syriza lawmakers, who said they wouldn’t consent to further austerity, also vote against the package Wednesday.

Tsipras may not be able to rely either on the backing of his junior partner, after Independent Greeks’ leader Panos Kammenos wrote on twitter “enough is enough,” once the creditors’ demands became known. Kammenos said Tuesday he would only vote for measures already approved by the Greek parliament. If all of Kammenos’s lawmakers vote against the deal, and there are no more defections from Syriza, the ruling coalition may be left with the support of just over 100 lawmakers.

Still, unless a full scale mutiny against Tsipras unfolds within Syriza, any further defections could be more than offset by the combined 106 votes of the three opposition parties that fully support the measures, ensuring a majority of over 200 votes or two thirds of the chamber. A simple majority of 151 votes or over is required for the measures to pass.

The question then, seems to be what happens next. That is, if Tsipras is forced to rely on Syriza’s opposition to pass the bailout package, it’s as yet unclear what that will mean for the embattled PM’s political capital and for the future of politics in Greece.

On Tuesday, a government official told Reuters that Tsipras would not resign following the vote meaning, to quote Bloomberg again, he will be forced to “preside over a minority government with the help of opposition parties [on the way to] implementing the very austerity [he] came to power to abolish.”

And that folks, is “democracy”, EMU style.