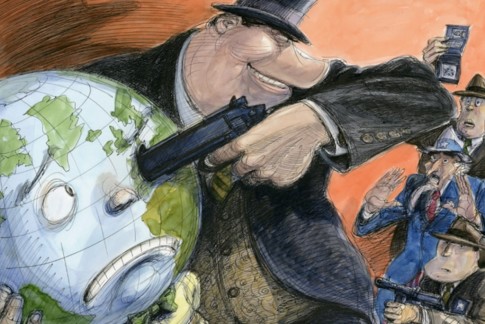 It appears that Ryan Coonerty, the Supervisor of the Third District of Santa Cruz County, wrote a letter back in June to the rest of the Board of Supervisors, in which he bravely pleaded the county cease business operations with five of the TBTF Wall Street Mega Banks. Why you ask? Well, because they are criminal felons. Considering Eric Holder refused to punish them (see: Cronyism Pays – Eric “Too Big to Jail” Holder Triumphantly Returns to His Prior Corporate Law Firm Job), someone has to take a stand.

Here are a few choice excerpts from the letter:

The banks have agreed to plead guilty to felony charges of conspiring to manipulate the price of U.S. dollars and euros exchanged in the foreign currency exchange spot market… The behavior of these banks is offensive and signals a Wall Street culture in which several big banks broke the law even after years of strong criticism and increased regulation following the economic crisis.

“There seems to be no limit to the greed in some our nation’s largest banks. I believe it is critical that the County only work with the most trustworthy institutions as we invest and protect the public’s tax dollars. Santa Cruz County should not be involved with those who rigged the world’s biggest financial markets.

Incredibly, the board went ahead and voted in favor of Mr. Coonerty’s proposal. AllGov reports that:

The board, acting on a request (pdf) from Supervisor Ryan Coonerty, voted to “not do new business for a period of five years with Citigroup, JP Morgan Chase, Barclays, Royal Bank of Scotland and UBS as specified, and further direct that the County unwind existing relationships with these five banks to the greatest extent feasible.”

That means the county won’t buy the banks’ commercial paper or investment services, and will withdraw whatever funds it can from them.

The banks made untold billions using a private electronic chatroom to manipulate the spot market’s exchange rate between euros and dollars. The fifth bank, USB, manipulated the London Interbank Offered Rate (LIBOR), the benchmark interest rate that banks charge to borrow from each other. One Barclays employee said in a chatroom, “If you ain’t cheating, you ain’t trying.”

No one went to jail.

I’d like to think this could be the start of a much bigger movement, but I’m not holding my breath. Well done, Ryan Coonerty.

Here’s a screenshot of the full letter: 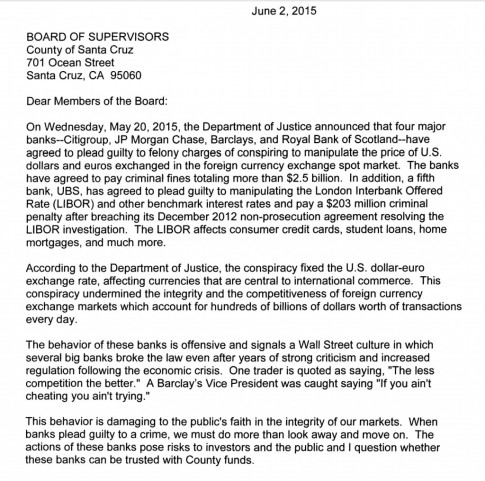 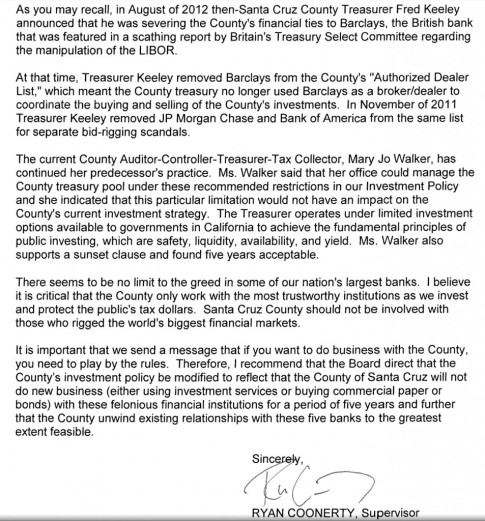 Why Obama Allowed Bailouts Without Indictments by Janet Tavakoli