“This is disturbing….A nation so quick to suppress its own history is truly doomed to repeat it………” 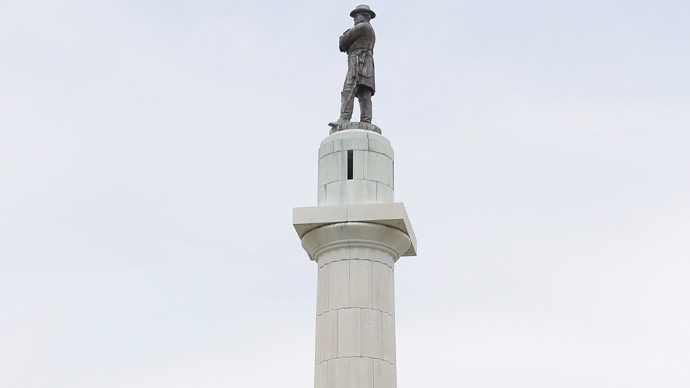 The council passed a unanimous motion to begin a two-month period of consultations with various city agencies on whether to declare the controversial landmarks “nuisances” and have them removed.

“To maintain these symbols as we move toward our future seems to belie our progress and does not reflect who we truly are or who we want to be,” Mayor Mitch Landrieu said as cited by the New Orleans Advocate.

“I ask you, how can we expect to inspire a nation when our most prominent public spaces are dedicated to the reverence of those who fought for bondage and supremacy of our fellow Americans?” he asked.

The four monuments slated to be scrapped are: the statue of Confederate troops commander General Lee atop a 20-meter high column in Lee Circle; a monument to the Crescent City White League, a white supremacist group during the post-war Reconstruction era that was involved in an uprising against the state government in 1974; a statue of Jefferson Davis, the president of the short-lived Confederate States of America, and a statue of Confederate General P.G.T. Beauregard. The mayor also wants to rename the Jefferson Davis parkway after Norman C. Francis, the retired, long-serving president of the black Catholic Xavier University of Louisiana.

Our symbols should inspire, include, & celebrate life, liberty & pursuit of happiness. Should show world we thrive on diversity. #NOLAforALL

The debate over old Confederate symbols in New Orleans was invigorated last month by the massacre at a black church in South Carolina. Self-identified white supremacist Dylann Roof stands accused of killing nine people at a Bible-study meeting. The crime sparked mass calls to have the Confederate battle flag and other similar symbols removed from public places in the southern states.

Mayor Landrieu’s initiative, (he is the first white mayor in predominantly black New Orleans since his father Moon Landrieu held the office in the 1970s), has strong support among constituents. For many black Americans Confederate monuments symbolize racism, reminding of slavery and forced segregation in the past.

“What I think people have realized is that these symbols provoke hate,” Xavier University history professor Sharlene Sinegal DeCuir said, as cited by the Advocate. “They provoke a message of hate and enslavement. And it’s really just a negative part of US history, altogether.”

Critics of the motion believe the monuments should be kept as a reminder of New Orleans past, however dark it may be.

“Because some evil person does an evil deed does not erase history,” said Thomas Taylor, commander of the Louisiana Division of the Sons of Confederate Veterans. “They’re doing their best to change history.”

“We, the Sons of Confederate Veterans, also deplore what happened in South Carolina,” he said. “But an awful act by an awful person on either side of this agenda doesn’t call for knee-jerk reactions and the attempted rewrite of history.”

Im sure no one has said this one yet! #sarcasm #LeeCircleReplacement #7: Because Nobody Doesn’t Like Sara Lee Circle! pic.twitter.com/Uac8HAkTbv

“It hearkens to a bygone era in which the power structure of this city was directly related to the White League and the white supremacy movement,” said City Council President Jason Williams. “To keep these monuments in place suggests that our power structure is still based upon those things.”

“This is a nice gesture, but it has been 131 years,” teacher Michael Moore said. “One hundred thirty-one years that Robert E. Lee’s statue has stood up there, and it’s an obvious homage to white supremacy.”

In the 1990s, Louisiana saw a campaign to change the names of dozens of schools across the state named after slave-owners. Of 51 such schools 26 were eventually renamed.

Enjoying wide public support, the removal of the monuments is virtually assured, although some argue the debate over Confederacy legacy should go beyond such landmarks.

“It is much more than saying, ‘Take down a flag, take down a monument,’ ” said Tulane University history professor R. Blakeslee Gilpin. “All those are excellent things to be having a conversation about. But white supremacy and institutional racism should be an ongoing part of the national conversation. Those are things we need to be wrestling with on a more elemental level than a superficial one.”