While we, and Syriza, await to see just how violently the Troika will throw up all over the Greek proposal (which may have been valid on June 26 but no longer is now that the Greek economy has ground to a halt and virtually all supply-chain linkages are broken leading to a freefall in GDP) and just how many more austerity and pension cut demands that red-pen covered creditor mark up will have, there is a new and far more pressing problem facing Greek PM Tsipras.

It turns out that after urging the Greek nation to vote “Oxi” to the June 26 Troika deal proposal, a demand which over 61% of the country followed, and less than a week later flip-flopping and capitulating to all demands (and then some) does have consequences for the Greek prime minister Tsipras, whose days in government now appear numbered.

And while the poll appears to have miscalculated just how willing the entire parliament is to sell out democracy, with 53% stating that the proposal would likely not pass parliament with full support (it did), another 51% believe that Greece will have snap elections in the “next couple of  months.” 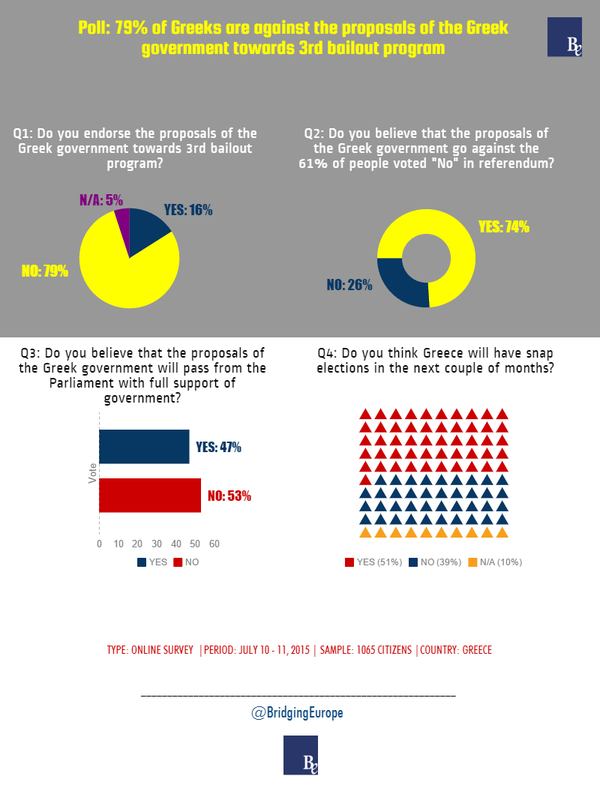 It is that last question that will be of greatest interest to Merkel and the Troika, because if indeed there is another imminent change in Greek government, either peacefully or less so, then the entire Third bailout, and the €74 billion in debt that the Troika may hand over to Greece next week, will be promptly voided and overruled by the next anti-austerity party (which one hopes is not the “radical right” Golden Dawn).

But in any case, the last thing Schauble et al will want, is to negotiate with an “untrustworthy” premier, one whose own people may overthrow in the coming weeks.

Which is a good lesson to aspiring politicians everywhere: if you are publicly betraying someone in a critical argument, make sure it is just one side, never both.

Then again, considering it may well have been Tsipras’ intention to lose the referendum vote and quietly go away into that good night, he just may be the biggest winner here. Let’s just hope that his succession is a peaceful one.