– Varoufakis Will Be Absent From Parliament Today, Detained Due To “Family Reasons”:

Following Varoufakis’ resignation as Greek finmin on Monday, the first official casualty of the Greferendum which in retrospect was completely irrelevant, he has been put in a tough position of still having to be physically present in parliament of which he remains a member. But not today: moments ago Yanis tweeted that he will not be present to cast the critical vote supporting Syriza’s backtracked proposal, as he will be detained for “family reasons.” 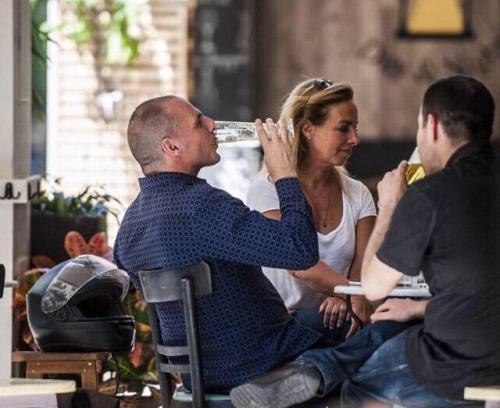 Nonetheless, he also tweets that he fully supports the new FinMin Tsakalotos’ “in the fight he is going to put at the Eurogroup.” Unclear which fight he is referring to since Greece has backtracked to a position from before the referendum, but whatever.

– Tsipras Sells Out Referendum ‘No’ Vote Ahead Of Weekend Deadline (ZeroHedge, July 10, 2015):

“We got a mandate to bring a better deal than the ultimatum that the Eurogroup gave us, but certainly not given a mandate to take Greece out of the eurozone,” Greek PM Alexis Tsipras reportedly told Syriza lawmakers on Friday, underscoring the fact that his government’s mandate is, for all intents and purposes, impossible to achieve.

As detailed Thursday evening, the proposal (or, the “thorough piece of text” as Jeroen Dijsselbloem called it) submitted by Tsipras looks quite a bit like the proposal the Greek people rejected at Tsipras’ urging last Sunday. Here are the basics:

The broad strokes: a 3 year, €53.5 billion bailout program, including €35 billion of growth measures, lasting through June 30, 2018 requesting funds from the ESM, seeking to finally put the IMF off to the side. The program is heavy on revenue promises and lite on actual spending cuts. Greece hopes to achieve a 1% primary budget surplus in 2015, rising to 2%, 3%, and 3.5% by 2018, all of which are now impossible due to the total collapse of the economy in the past week. Among the tax reform will be a modest increase in corporate tax from 26% to 28%. The changes to the VAT system are as noted previously, keeping the VAT on hotels at 13% but raising it to 23% for restaurants; Greece also promises to eliminate discounts on islands, starting with the islands with higher incomes and which are the most popular tourist destinations. Create strong disincentives to early retirement, incur penalties for early withdrawals, make all supplementary pension funds financed by own contributions; and so on. Greece will seek to “gradually phase out the solidarity grant (EKAS) for all pensioners by end-December 2019” – who will be impacted and when: “the top 20% of beneficiaries in March 2016.” In other words another 9 months of non real action. Greece will also “freeze monthly guaranteed contributory pension limits in nominal terms until 2021.”

Reactions from Europe and from Syriza itself have been largely predictable. As mentioned above, Dijsselbloem is lukewarm, French President Francois Hollande called the proposal “serious and credible”, Italian PM Matteo Renzi is “more optimistic than [he] was in the past,” while Germany is, to use Bloomberg’s words “reserving judgement.”

On person who is not “reserving judgement” however is Greek Energy Minister and far-left leader Panagiotis Lafazanis. “The proposals are not compatible with the Syriza programme,” he told Reuters on Friday. On Thursday, in the course of detailing Greece’s €2 billion energy partnership with Russia, Lafazanis said the referendum “no vote “must not become a humiliating ‘yes’.”

While the Eurogroup will convene on Saturday to consider whether to go ahead with the deal, the first hurdle is the Greek parliament where Tsipras is set to use what Deutsche Bank calls an “unusual political move” to give the proposal a better chance of passing next week. Here’s Deutsche Bank with more:

In the meantime, the Greek PM has initiated the domestic approval process as well. In an unusual political move, he has submitted a one-page legislative proposal requesting emergency parliamentary authorization to negotiate the final terms of the agreement. He has published the government’s proposal at the same time, but is not calling for parliament to vote upon the actual measures. In principle such authority is not required. In practice, the strategy aims at consolidating the SYRIZA party’s parliamentary base ahead of a likely vote to approve the measures next week. On the positive side, pre-emptive parliamentary support will make it more difficult for SYRIZA MPs to reject an agreement after it comes to parliament. On the negative side, the PM will also have an authority to reject an agreement if he so decides.

The opposition’s stance to this strategy remains to be seen, but it will be the support of the government’s parliamentary majority that will be the most important today. The PM will meet with SYRIZA parliamentarians at 6am London time. A full parliamentary vote will take place later in the evening. Approval will provide negotiating space to the PM, increasing credibility with the Europeans and the odds of passage in a subsequent parliamentary vote next week.

In other words, it appears as though Tsipras is looking to back the Syriza hardliners into a corner. The argument appears to go something like this: voting on the actual proposals would be largely pointless as Europe hasn’t approved them, so let’s vote on whether I have the authority to negotiate the measures, but if you say “yes” to that, and I agree to a deal this weekend, then I can then come back to you and say “well, you gave me the authority to negotiate and I decided to accept so now you pretty much have to approve this.” This strategy has the added benefit of allowing Tsipras to tell Europe that the Greek parliament voted “yes” even though in reality they did not vote on the actual deal. You have to love politics.

As for “debt sustainability” (i.e. that small issue which the IMF brought up three days before the referendum and effectively won the vote for Tsipras and the “no” crowd), that will be considered later apparently. From Bloomberg:

Debt sustainability is a central part of discussions in the Euro Working Group and the Eurogroup of euro-area finance ministers, EU official says.

First, prior actions will be discussed, then financing, then debt sustainability — but they are all linked, official says.

They may be “all linked” but Germany still isn’t biting — or at least not on the idea of a “classic haircut.” Here’s the Irish Times:

His unexpected comments – the first from a senior EU figure – followed a phone conversation with Greek prime minister Alexis Tsipras.

Senior officials representing the 19 euro zone member states will consider Greece’s new reform plan on Friday, ahead of a scheduled eurogroup meeting of finance ministers in Brussels on Saturday.

In a sign that Berlin could be open to the idea of debt relief, German finance minister Wolfgang Schauble said the issue could be discussed over the coming days, though he hinted that the impact of any measures would be minimal. “The room for manoeuvre through debt reprofiling or restructuring is very small,” he said.

German chancellor Angela Merkel also explicitly ruled out a debt writedown for Greece. “I have said that a classic haircut is out of the question for me and that hasn’t changed between today and yesterday,” she said, echoing comments she made on Tuesday in Brussels.

Speaking within hours of Mr Tusk’s comments, she said that Greece’s debt sustainability had already been addressed under previous bailouts.

So, just as we said: Germany and the US are now at odds over a Greek debt writedown.

Ultimately, Tspiras has submitted the same proposal that Greeks, at his behest, voted against last weekend. The PM will use a shrewd political maneuver to secure parliamentary support and new FinMin Euclid Tsakalotos will attempt to close the deal on Saturday. And although that would mean selling Greek “no” voters down the river, it’s once again a nearly impossible choice because as Bloomberg reports, citing Dutch newspaper Het Financieele Dagblad, the ECB “will terminate emergency liquidity assistance (ELA) to Greece as of 6am on Monday morning if Greek reform proposals are deemed too light and if Greece is unwilling to cooperate with withdrawal from the euro zone.”

Here’s Commerzbank’s Markus Koch summing things up: “The ‘No’ in the referendum appears to be turning into a ‘Yes’ from Tsipras.” 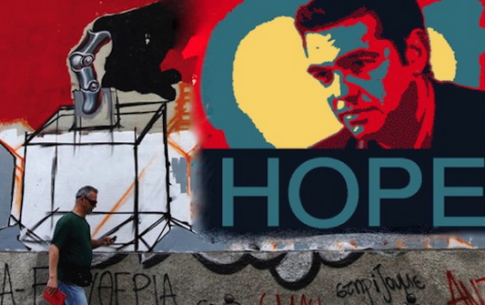 …and so much for this as well… 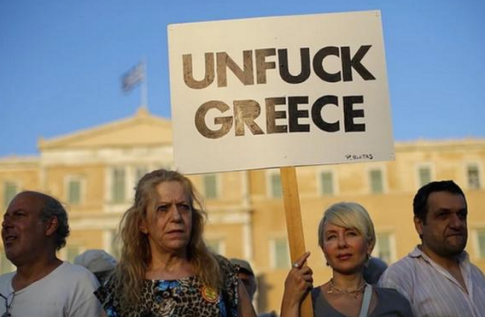 1 thought on “Tsipras Sells Out Referendum ‘No’ Vote Ahead Of Weekend Deadline – Varoufakis Will Be Absent From Parliament Today, Detained Due To “Family Reasons””