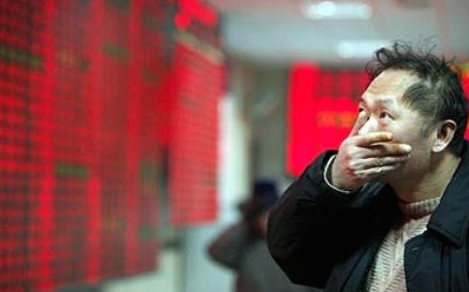 Although it’s not possible to know exactly what the mood is among Party officials in China regarding the inexorable slide in stock prices that’s unfolded over the course of the last three weeks, it’s reasonable to assume that at least some officials in Beijing are in the throes of Politburo panic after watching some $3 trillion in market value disappear into thin (and probably polluted) air.

Amid the turmoil, China has resorted to an eye-watering array of policy maneuvers, pronouncements, and plunge protection schemes aimed at arresting the slide.

Not suspending compulsory liquidation for unmet margin calls, not billions in committed market support from brokerages, not a PBoC backstop for the CFSC, and not even a ban on selling by the Social Security Council.

For reference, here (courtesy of Bloomberg) is an annotated chart of the wild ride Chinese stocks have had in 2015: 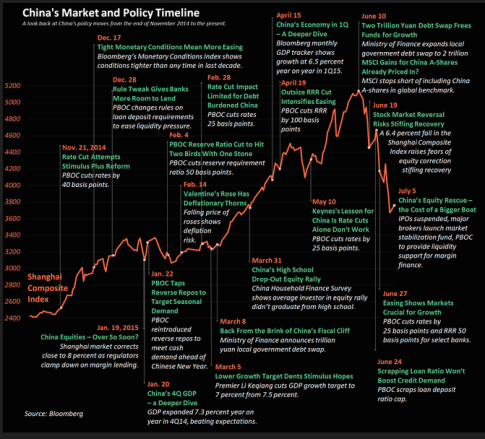 And so, with every attempt to manipulate the market higher falling flat in the face of selling pressure from the hairdresser/ farmer/ banana vendor day trading crowd (which has now thrown in the towel on the whole “it’s easier than farm work” theory and now just wants to break even and head for the hills) the only thing left for China to do is “fix” the narrative.

In other words, when banning selling doesn’t work, the logical next step is to ban talking about selling. Here’s FT with more:

Shares have shed some 30 per cent of their value since mid-June, punishing small investors, some of whom have borrowed heavily to jump on board what had been a spectacular bull run.

“There is a panic but no matter how they [the authorities] jump in, this thing just doesn’t stop falling,” said Dong Tao, regional economist at Credit Suisse in Hong Kong.

Analysts said the more Beijing does the more it risks creating a perception of desperation, particularly if its efforts have no discernible effect.

“All this activity has supported a view that policy makers are in a state of panic,” wrote Mark Williams at Capital Economics.

“The financial system is about trust and transparency, but we’re not getting either from the government,” said Dee Sum, a 35-year-old banker in Hong Kong, whose family has sustained heavy losses on the stock market in recent weeks.

One domestic journalist, who did not want to be named, said the government had banned local media from using the terms “equity disaster” and “rescue the market” in their reports on the stock market.

So apparently, Beijing will now prevent journalists from accidentally jawboning the market lower so that Party mouthpiece media outlets are free to jawbone the market higher.

Needless to say, we doubt if this hail mary attempt to rescue the market will do anything at all to save China from its homemade equity disaster.