Earlier today, as has become a symbolic custom, Tsipras spoke to Russia’s Putin by phone. Aside for the referendum, the topic of their conversation was unknown, but both sides rushed to note that financial aid was not among the topics of discussion, which assures it was. However, with the Greek negotiations still ongoing even if, as Germany has claimed, all bridges have been burned, there is no point for the Kremlin to step in at this moment and disclose itself as a Lender of Last Resort. It still has a few days.

However, while Russia patiently awaits for the right moment to step up, either alone or together with China, its media has no intention to wait when it comes to gloating at Europe’s misfortune.

And gloat it has this morning, mostly at the chancellor of a continent that over the past year has gone out of its way to portray Russia as the devil incarnate and launched countless sanctions (that backfired and would have led Germany to a triple-dip recession if not for the ECB’s Q€), as shown best by the following headline image on Russia’s Sputnik News, which pretty much sums up the new European reality in six words, and one half of Merkel’s face 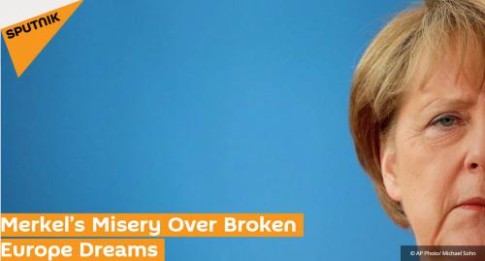 German Chancellor Angela Merkel was adamant she would not be the German leader that presided over a Greek exit from the Euro that would plunge the European dream into crisis. She may not yet have failed, but she is damaged.

From there, the gloating only gets beter:

After the Greeks voted against accepting the latest demands from its creditors, Merkel is facing her worst nightmare: a possible Greek exit from the euro, a possible exit from the EU completely and loss of confidence in the currency itself.

For months, Merkel has been anguishing over how to tackle the Greek problem. After five years of bailouts, the problem is nowhere near fixed and – if anything – worse. Yet she may have herself to blame for vacillating over the issue.

When the Greek crisis hit in 2010, Merkel insisted on bringing in the International Monetary Fund (IMF) as part of the troika that included the Eurozone states and the European Central Bank (ECB). There was no clear lead authority. Merkel did this against the advice of her finance minister Wolfgang Schäuble, who has long argued that the EU should solve its own problems. This was the first mistake.

As a result, the three institutions put together a scratch package of bailouts and demands that have created chaos. Traditionally, in previous country bailouts, the IMF would have been the lead agency. The troika have pursued a series of mini bailouts with conflicting demands, when – many argue – a managed exit from the euro would have been the better course of action.

Merkel’s next mistake was a cultural one. When she came to power, Germany was in the grip of economic crisis: high unemployment and a tax and welfare regime that was in need of reform. She set about doing this and her austerity package worked

When Greece began to collapse, due to its appallingly low rate of tax collection and its totally unsustainable welfare and pensions system, Merkel pronounced that her German reform methods be inflicted on the rather laid back Greeks, who had been enjoying the largesse of Euro membership during the good times. Culturally, to try and turn round the Greek tax and pensions system within five years was to hard a hill to climb.

One the one hand, she was demanding a stricter package of reforms, based on her own Germanic experience, which would inevitably cripple Greece. While on the other hand, she was determined not to let Greece leave the euro and damage the great European dream.

Just who will have the final laugh?