“Can kicking days are over……..Greece has voted No.
No more greedy gut strangle hold……the people are fed up.
The so-called close call between yes and no was eliminated in the first few hours…..
Now, here is a good summary of where everyone stands…..” 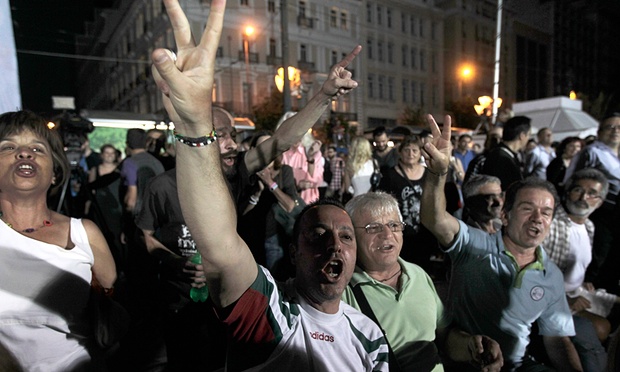 – The Guardian view on Greece’s no vote: eight days that shook a continent (Guardian, July 5, 2015):

The last week has seen many extraordinary things, from stiff limits at cashpoints to cross-border meddling in national democracy. Europe has not handled it well. It urgently needs to do better in picking up the pieces

Kicking the can down the road has been the cliche of choice over a slow euro crisis that has steadily strangled the life out of the Greek economy. But at some point Europe was bound to run out of road. That happened on Sunday night, when it emerged that the Greek people had said no to continuing to engage with their creditors on the same suffocating terms.

Just over a week ago, Alexis Tsipras staked his future on forcing this denouement. The eight days that followed his midnight declaration of a plebiscite, to accept or reject the creditors’ terms for the latest slug of overdraft, have witnessed many extraordinary things. The Greek parliament licensed a hasty referendum on a question that had already been overtaken by events. A ballot paper written in jargon posed a ludicrously technical question, opening up a void for emotion to fill. Mixing talk of “terror” from their partners with haze about what would happen after a no, Mr Tsipras and his finance minister, Yanis Varoufakis, aimed squarely for the heart rather than the head. Meanwhile, Greeks faced the fiercest financial controls ever seen in modern Europe: bank doors were shut, supplies disrupted, and citizens queued at every cashpoint for their ration of notes. In countries such as Germany, where history engenders suspicion of referendums, it may have looked like a paradigm case of how not to do democracy.

But the response of the creditors was more extraordinary still. The first noises from the council of finance ministers and the European Central Bank sounded so hawkish that they might have been trying to get the vote cancelled. But then came a bit of a rethink: it emerged that the ECB was capping, rather than cutting off, liquidity support, and leaders including Angela Merkel spied an opportunity to rid themselves of a tricksy interlocutor. They imagined scared voters rallying to yes, trashing Mr Tsipras’s personal authority and perhaps unravelling his loose-knit Syriza alliance. By signalling that voting no would push Greece out of the euro, they broke all the usual protocols by weighing into someone else’s democratic contest. It was an appallingly presumptuous path to go down. Now, after Greece has said no, Mr Tsipras’s future is not the immediate question. It is the fate of the euro itself which is hanging by a thread.

All the eurozone leaders have their own mandates and domestic pressures, but those in the prosperous north should have grasped how much less room for manoeuvre there was for a Greek government presiding over a society which hardship has pushed to the edge of ruin. Having scotched one referendum plan under the altogether more clubbable George Papandreou government, northern leaders seeing the plebiscite resurface in less palatable form should have done a little soul-searching, about whether it is sustainable for Europe to allow itself to be pitted against “the people” in any one state. Above all, the creditors should have shown humility about the abject failure of five years of imposed austerity, which have not even succeeded in the very narrow terms of making it feasible for Athens to pay its debts.

The messy fallout from the referendum will need to be much more adroitly managed than the campaign. Athens needs to cool the rhetoric, and negotiate with steely calm. It may be economically weak, but the logic of the negotiation could be on its side. If Greece is forced out of the euro, contracts will be disrupted and supplies may dry up for a while, but in principle a carefully managed devaluation could provide a path away from penury. For the broader eurozone, by contrast, forcing Greece out will produce no upside. Instead of a negotiated debt settlement, official creditors could lose everything. A slow-burn fuse would be lit under the whole single-currency project, as markets speculate on where may be next. And now that the respectable course of EU-backed orthodoxy has failed at the ballot box, there is also a risk of political contagion, with untold consequences for the more fundamental and more precious project of kinship across the continent.

European leaders who have been used to getting their way in the past cannot presume that they will do so in future. They must show some humility and listen to a Greek people who have been driven to this leap in the dark. They must come up with reforms to fix a rickety single currency from its foundations. In time, that will mean underpinning monetary integration with broader sovereignty-sharing. More immediately, it means having the honesty to admit that the full Greek debts will not be repaid, and being ready to negotiate towards something more realistic.

3 thoughts on “The Guardian view on Greece’s NO vote: eight days that shook a continent”