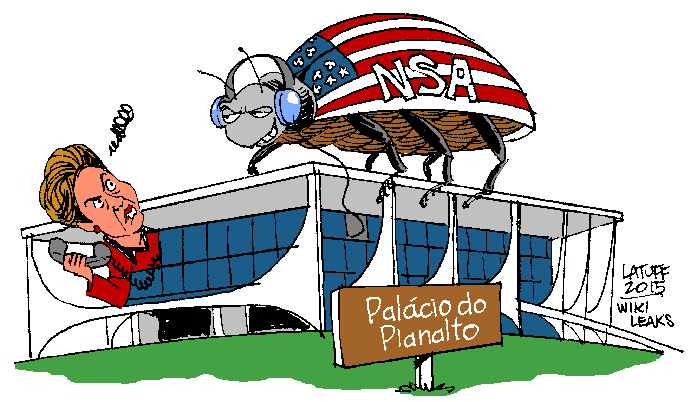 The US National Security Agency tapped the telephones of 29 Brazilian government top officials as well as waged economic espionage against the country by listening in to calls of those managing Brazilian economy, WikiLeaks claims in a new release.

A top secret NSA target list published by the whistleblowing website Wikileaks on July 4 contains 29 key Brazilian government phone numbers. The list of those selected for intensive interception includes not only President Dilma Rousseff but also her assistant, her secretary, her chief of staff, her Palace office and even the phone in her presidential jet.

The US National Security Agency also spied on several Brazilian Finance Ministers and even the Governor of the Brazilian Central Bank, it appears from the release.The NSA economic targets allegedly include Nelson Henrique Barbosa Filho, the Minister of Planning, Budget and Management, who earlier was an Executive Secretary at Brazil’s Ministry of Finance and Antonio Palocci, current president’s Chief of Staff, who served as Minister of Finance under former President Lula.

The published materials contain no specifications concerning the period, during which the telephones of Brazil’s top officials were tapped by the NSA, thus it is unclear whether US intelligence spied on Brazilian government in the past or still does it now.

“Our publication today shows the US has a long way to go to prove its dragnet surveillance on ‘friendly’ governments is over. The US has not just being targeting President Rousseff but the key figures she talks to every day,” WikiLeaks editor-in-chief Julian Assange commented on the publication.

“If President Rousseff wants to see more US investment in Brazil on the back of her recent trip as she claims, how can she assure Brazilian companies that their US counterparts will not have an advantage provided by this surveillance,” he added.

The USA is also said to have targeted Brazilian diplomacy and military chiefs by wiretapping the phones of the country’s foreign minister and its ambassadors to Germany, France, the EU and Switzerland. Luiz Alberto Figueiredo Machado ,the former Minister of Foreign Affairs, and now an Ambassador to the US is also on the list.

Another US target was Army General Jose Elito Carvalho Siqueira, who is responsible for the president’s direct and immediate assistance concerning national security and defense policy.

Most of the #Brazil#NSA#surveillance targets have nothing to do with security. Most are related to Finance. Clear economic espionage.

The latest Wikileaks revelation came just days after Dilma Rousseff’s visit to the United States aimed at putting an end to the cooling of relations between the two countries caused by another spying scandal.

In 2013, after Edward Snowden had revealed that US intelligence spied upon personal communications of many world leaders, including Rousseff, she canceled her visit to the United States, demanding a written apology from the US.

A recent warming-up in relations between the US and Brazil followed the summit of the Americas in Panama in April 2015, when US President Barack Obama reassured Rousseff that the US would not spy on “friendly” leaders anymore telling her that “should he ever need nonpublic information about Brazil, he would just pick up the phone and call me,” as quoted by the New York Times.

During her visit to the US, Rousseff said that President Barack Obama’s promise was enough for her implying that the countries managed to overcome the differences caused by the 2013 scandal.

The new WikiLeaks publication continues a series of the recent whistleblowing portal revelations that demonstrated systematic US spying on the top officials of different countries.

On July 1, Wikileaks revealed that the NSA has been wiretapping highest Germans officials’ communications and earlier, in late June, the portal’s publications showed that the US has been spying on three French presidents including Francois Hollande, Nicolas Sarkozy and Jacques Chirac as well as the French and German economic ministries, the EU Central Bank and French private industry.