… at this very moment, politicians from Spain’s Podemos to Italy Five Star movement are drafting memos demanding that the IMF evaluate their own debt sustainability. Or rather unsustainability.

By now it should be clear to all that the only reason why Germany has been so steadfast in its negotiating stance with Greece is because it knows very well that if it concedes to a public debt reduction (as opposed to haircut on debt held mostly by private entities such as hedge funds which already happened in 2012), then the rest of the PIIGS will come pouring in: first Italy, then Spain, then Portugal, then Ireland.

The problem is that while it took Europe some 5 years to transfer a little over €200 billion in Greek private debt exposure to the public balance sheet (by way of the ECB, EFSF, ESM and countless other ad hoc acronyms) at a cost of countless summits and endless negotiations, which may or may not result with the first casualty of the common currency which may prove to be reversible as soon as next week, nobody in Europe harbors any doubt that the same exercise can be repeated with Italy, or Spain, or even Portugal. They are just too big (and their nonperforming loans are in the hundreds of billions).

And yet, today, in a stunning display of the schism within the Troika, it was the IMF itself which explicitly stated that Greece is no longer viable unless there is both additional funding provided to the country, which can only happen if there is another massive debt haircut.

This is what the IMF said:

Even with concessional financing through 2018, debt would remain very high for decades and highly vulnerable to shocks. Assuming official (concessional) financing through end–2018, the debt-to-GDP ratio is projected at about 150 percent in 2020, and close to 140 percent in 2022 (see Figure 4ii). Using the thresholds agreed in November 2012, a haircut that yields a reduction in debt of over 30 percent of GDP would be required to meet the November 2012 debt targets. With debt remaining very high, any further deterioration in growth rates or in the mediumterm primary surplus relative to the revised baseline scenario discussed here would result in significant increases in debt and gross financing needs (see robustness tests in the next section below). This points to the high vulnerability of the debt dynamics.

Bingo, because that is, in a nutshell, precisely what Tsipras and Varoufakis have been claiming since day one. As expected, a Greek government spokesman promptly said that the IMF report is in line with the Greek government’s view on debt.

What makes the IMF report even more odd, is not so much its content and position which have been largely known for quite some time now, but its timing: just three days before the Sunday referendum, Tsipras now has prima facie evidence to wave in front of the Greek people and say “see, we were right all along.”

It is exactly the case that only a “No” vote at this point would allow Greece to continue a negotiation which has already seen one of the three Troika members side with the Greek position. Should Greece vote “Yes”, it will make any future negotiation with the Troika impossible, and while the country will get a few months respite the resultant bank run after the bank reopen with the ECB’s blessing will mean that all Greece will do is buy itself a few months time. Only this time all the debt will still be due.

And, should hey vote “Yes”, this time the Greeks will only have themselves to blame for all the future pain, pain which will continue well after the mid-point of this century.

But ignoring Greece for a minute, what the IMF’s “debt sustainability analysis” has just done is open the door for every single other comparably insolvent peripheral European nation to knock on Christine Lagarde’s door and politely ask: “Mme Lagarde, if Greece is unsustainable, then why aren’t we?”

Because as the chart below shows, the debt situations of all the other peripheral European nations is just as “unsustainable.” 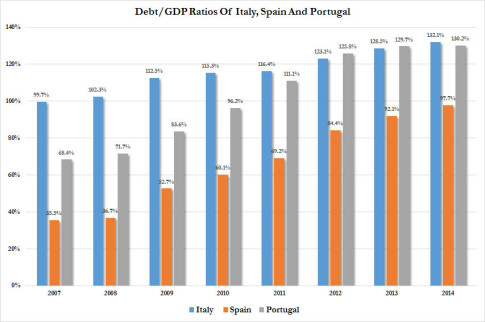 In this way, while the outcome of the Greek situation is currently unknown, it has also become moot, because at this very moment, politicians from Spain’s Podemos to Italy’s Five Star movement are drafting memos demanding that the IMF evaluate their own debt sustainability. Or rather unsustainability.

Perhaps more importantly, these same politicians will now dangle the prospect of an IMF admission that they, too, deserve a haircut as the catalyst to be elected into power. After all who can refuse that their life would be made so much better if only the country was permitted to selectively “default” on €50, €100, €200 billion or more in debt? Just elect this politician, or that, and watch your living standard soar…

And since the IMF has no choice but to agree that just like Greece all these nations are accordingly drowning in debt, Syriza’s sacrifice (assuming Tsipras fails to outnegotiate Merkel) will not have been in vain. In fact, it may very well end up that today the IMF opened up the Pandora’s box, one which, more than a Grexit, will destroy Merkel’s “united Europe” legacy.

2 thoughts on “Did The IMF Just Open Pandora’s Box?”