With capital controls already imposed on Greece, some have wondered if this is as bad as it gets. Unfortunately, as the Cyprus “template” has already shown us, for Greece the nightmare on Eurozone street is just beginning.

As a reminder, over the past few months there have been recurring rumors that as part of its strong-arming tactics the ECB may eventually move to raise the haircuts the Bank of Greece is required to apply to assets pledged by Greek banks as collateral for ELA. The idea is to ensure the haircuts are representative of both the deteriorating condition of Greece’s banking sector and the decreased likelihood that Athens will reach a deal with its creditors.

Flashback to April when, on the heels of a decree by the Greek government that mandated the sweep of “excess” cash balances from local governments to the Bank of Greece’s coffers, Bloomberg reported that the ECB was considering three options for haircuts on ELA collateral posted by Greek banks. “Haircuts could be returned to the level of late last year, before the ECB eased its Greek collateral requirements; set at 75 percent; or set at 90 percent,” Bloomberg wrote, adding that “the latter two options could be applied if Greece is in an ‘orderly default’ under a formal ECB program or a ‘disorderly default.’”

While it’s too early to say just how “orderly” Greece’s default will ultimately be, default they just did if only to the IMF (for now), in the process ending their eligibility under the bailout program and ending any obligation by the European Central Bank to maintain its ELA or its current haircut on Greek collateral, meaning the ECB will once again reconsider their treatment of assets pledged for ELA and as FT reported earlier today, Mario Draghi may look to tighten the screws as early as tomorrow:

When the Eurozone’s central bankers meet in Frankfurt on Wednesday, they could make a decision which some officials fear could push one or more of Greece’s largest banks over the edge.

The European Central Bank’s governing council is poised to impose tougher haircuts on the collateral Greek lenders place in exchange for the emergency loans. If the haircuts are tough enough, it could leave banks struggling to access vital funding.

The ECB on Sunday imposed an €89bn ceiling for so-called emergency liquidity assistance, effectively putting the Greek banking system into hibernation. If, to reflect the increased risk of default, the ECB now applied bigger discounts to the Greek government bonds and government-backed assets which lenders use as collateral, that could leave banks struggling to roll over those emergency overnight loans.

Some on its policy-making governing council feel that Athens’ exit from a programme — notwithstanding its 11th-hour request for an extension and third bailout — leaves the ECB with little choice but to take actions that would, in effect, cut the Bank of Greece’s emergency support to Greek lenders.

Some eurozone officials fear that the position at Greece’s biggest lenders is so tight the ECB could be in danger of pushing some weaker banks over the edge if tougher haircuts are imposed.

Recall that in mid-June, Greek banks were said to have had as much as €32 billion in ELA eligible collateral that served as a buffer going forward. Since then, the ELA cap has been lifted by around €5 billion, meaning that a generous estimate (and we say “generous” because according to JPM, Greek banks ran out of ELA collateral weeks ago) puts the buffer at a little more than €25 billion.

As the haircut rises, that buffer disappears and once the discount applied to the collateral reaches a certain level, an implied depositor haircut materializes. Why? Because by simple balance sheet rules, assets must match liabilities (leaving a token €0.01 for shareholder equity) and once the haircuts eat through the collateral buffer, the implied value of Greece’s pledged assets (currently at around €125 billion) will quickly fall below the value of Greek banks’ unsecured liabilities which sit at around (but really under) €120 billion as of the date capital controls were imposed in Greece over the weekend. These liabilities are better known as “deposits.”

At that point, a depositor haircut is required.

Although the collateral haircuts aren’t public, the face value of pledged collateral is (it can be found on the BoG’s balance sheet) as is the ELA cap, meaning it’s possible to estimate the current haircut and, starting with the assumption that a generous €25 billion buffer remained as of the ECB’s Sunday freeze of the ELA ceiling at €89 billion, project the implied depositor bail-in for different collateral haircut assumptions.

Here is the summary sensitivity analysis indicating what a specific ELA haircut translates to in terms of deposit haircut. 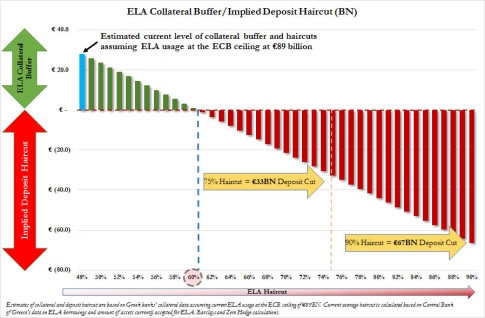 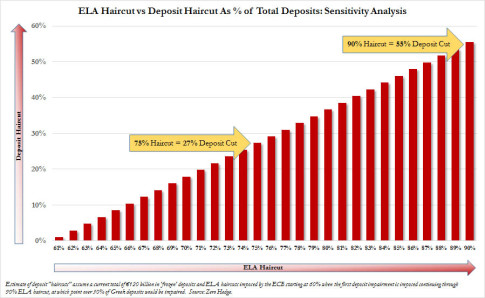 Note that the latter scenario looks quite familiar to what happened in Cyprus, and indeed that’s not at all surprising because if, as Dijsselbloem himself said, Cyrpus is a “template“, then the next step after capital controls is a depositor bail-in.

And while we wish we could have some good news for the Greek population, this outcome may have been preordained by none other than Goldman whose Hugh Pill, who on June 28 suggested the following:

The core constituency of the current Greek government — pensioners and public employees — has enjoyed the first claim on remaining government cash reserves. Only when those cash reserves are exhausted will that constituency face the direct implications of the liquidity squeeze the political impasse between Greece and its creditors has created. And only then will the alignment of domestic political interests within Greece change to allow a way forward.

And as Goldman’s former employee and current head of the ECB is about to have his way, the pensioners and public employees will be the first to suffer – first with capital controls and then with ever increasing haircuts on their deposits.

In other words, in order for the Troika to finally achieve its goal of either forcing Tsipras to relent or inflicting enough pain on Syriza’s “core constituency of pensioners and public sector employees” to compel them to drive the PM from office, after capital controls come the depositor haircuts, first small, then ever greater until Greece collectively Cries Uncle and begs Europe to take it back while presenting Merkel with Tsipras and Varoufakis’ heads on a proverbial (and metaphorical, we hope) silver platter.