Just hours after Greece became the first developed country to default to the IMF, as a result being expelled from its existing bailout program, a little before 5am CET news hit that Greek PM Tsipras was willing to concede to virtually all creditor demands, with a few exceptions. As the FT first reported, “Greek prime minister Alexis Tsipras will accept most of the bailout creditors’ conditions offered last weekend, but is still insisting on a handful of changes that could thwart a deal according to a letter he sent late on Tuesday night.”

The two-page letter to the heads of the European Commission, International Monetary Fund and European Central Bank and obtained by the Financial Times, elaborates on Tuesday’s surprise request for an extension of Greece’s now-expired bailout and for a new, third rescue rescue worth €29.1bn.

The letter was sent as eurozone central bankers were preparing on Wednesday to raise the heat on Greece and its banks by restricting their access to emergency loans, a decision that could topple at least one Greek bank.

Although the bailout’s expiry at midnight Tuesday night means the extension is no longer on the table, Mr Tsipras’ new letter, which marks a significant climbdown from his previous position, could serve as the basis of a new bailout in the coming days.

Mr Tsipras’ letter says Athens will accept all the reforms of his country’s value added tax system with one significant change: keeping a special 30 per cent discount for Greek islands, many of which are in remote and difficult-to-supply regions.

As Bloomberg added, “The letter is the latest indication that Tsipras may be more willing to yield to prevent the nation’s economy from cratering after more than five years of crisis-fighting. Today, euro area finance ministers will weigh the bid from Tsipras, while European Central Bank policy makers will discuss whether to maintain their emergency lifeline.”

And as per the WSJ, “in the new letter sent to the country’s lenders late Tuesday night, Greek Prime Minister Alexis Tsipras proposes changes on several key parts of measures at the center of a five-month standoff between the two sides over funding Greece desperately needs.”

Those include a later start of pension overhauls and exceptions on sales-taxes for certain Greek islands, measures that lenders already rejected when talks broke down last week.

“If Friday’s proposals (from creditors) are the baseline, these measures would significantly increase (the) fiscal gap,” said one official. “And lots of clarifications would be needed on other aspects,” the official added.

A second official said that the proposals from Mr. Tsipras are a weakening of the measures that have been discussed and would not be well received by the three institutions that oversee eurozone bailouts–the European Commission, the European Central Bank and the International Monetary Fund. A third official echoed that assessment.

The letter is the latest in a flurry of drama over the bailout. In the last week, Greece has called a referendum on demands made by creditors and closed its banks to stop a flow of money out of the country. On Tuesday, it became the first developed country to default on the IMF, as the rescue program that has sustained it for five years expired.

The full letter, which was not denied by the Greeks, can be found below:

To be sure, equity markets around the globe, and especially in Europe soared while bond markets tumbled, when the news firstt hit just around 11am CET. 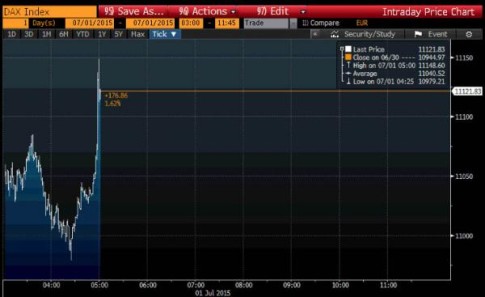 Curiously, this happens even after news that in one of the first polls conducted since the referendum announcement a majority of the Greeks would be willing to side with Tsipras gambit and vote No:

And yet, the question is: just what offer is Greece conceding to – the one which expired yesterday? And then there is also the question whether Europe is even willing to budge at this point, since it goes to the very core of the matter: just who is it that wants a Grexit (recall: according to Goldman, a Greek exit is just what the ECB wants to boost QE).To be sure the first countr headlines from the Troika were anything but supportive.

Schauble made it quite clear that the Greek offer has now expired, and “any further negotiations on aid to Greece would be more difficult and fall under the European Stability Mechanism, which incidentally is just what Tsipras had requested overnight. He had a few more comments:

Others joined in: Reuters cites Italy’s PM who said that Greek Prime Minister Alexis Tsipras announced plans for a referendum on European bailout conditions for political reasons and the vote is “highly risky.”

Austria’s FinMin Schelling said should the Greeks vote no in a referendum on Sunday on whether to accept Athens’ creditors’ bail-out terms, no new talks would be possible with the cash-strapped nation.  “If Greece votes no, no further talks will be possible,” he said on the sidelines of an economic event.

Euro zone officials said a letter sent to creditors by Greek Prime Minister Alexis Tsipras on Tuesday contained conditions for Athens’ acceptance of a loan offer that at least some governments would find hard to accept.

The letter, seen by Reuters on Wednesday, said Greece would accept terms published by the European Commission on Sunday but with a number of amendments, including maintaining a reduction on value-added tax for Greek islands and maintaining a pension supplement for the richest beneficiaries for the time being.

“There are still a lot of loose ends,” one euro zone official said. “The letter mentions, for example, reform of the labour market from autumn. It’s just one sentence, not more.

“I don’t think the Eurogroup still believes those promises just like that. By the way, they’re asking for the extension of a programme which has already expired.”

But the biggest hurdle by far is that Greece still seems intent to proceed with the Referendum. Clearly at this point withdrawing the popular vote would be political suicide for Tsipras who just two days ago, full of bluster, addressed the nation and saying it would not be blackmailed. Flipping on that position would hardly win him any popularity points.

Which begs the question: is this merely the latest ploy in the blame game, in which Greece can say: look, we tried absolutely everything, and they still did not budge, just to assure a “No” vote.

Ironically, it is Europe who now appears to desire a referendum as much as Greece.

And what happens then?

To be sure, many “game theoretical” elements and nobody really has any idea what happens next as the Grexident unfolds.For now, however, at least the algos are happy if gradually fading the initial kneejerk bounce higher even as the EUR has now seen right through this latest diplomatic ruse and fallen back to unchanged since before the announcement. 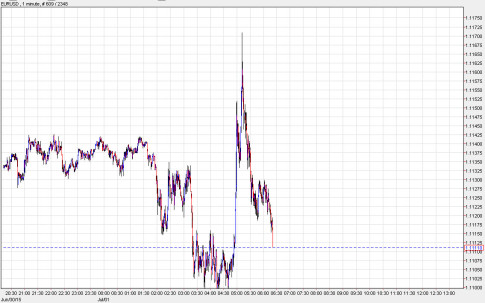